A Massive Gravity Bulge Was Spotted on Venus

Astronomers say it's the largest gravity wave ever witnessed. 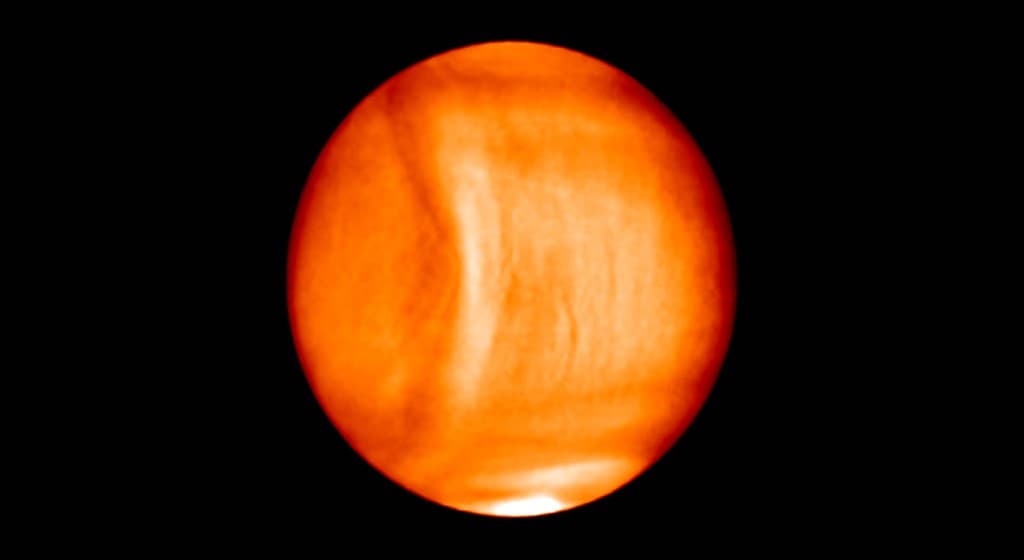 The universe is full of strange occurrences. While some people speculate such things are due to the existence of extraterrestrial life — like that bizarre megastructure which still remains largely unexplained – others adopt more factual reasoning.  Recently, another one of these mysterious space objects has been spotted on Venus.

The massive bow-shaped bulge was spotted on the surface of Venus by Japan's Akatsuki probe last December. The strange structure was located about 65  km (40 miles) above the surface, stretching about 10,000-km (6,214-miles). Moreover, it stayed eerily still as it dominated Venus' uber dense and hot atmosphere, withstanding the planet's legendary 359 km/h (223 mph) winds. The bulge disappeared immediately after being visible for four straight days.

Similar occurrences were previously captured by Europe’s Venus Express spacecraft during its 10-year mission. Now, the Akatsuki probe patiently lingers around Venus, waiting for the phenomenon to reappear.

Scientists are baffled by the phenomenon, but they do have a proposed explanation. In a study published in the journal Nature Geoscience, the Akatsuki team describes that this strange bulge may be evidence of a massive gravity wave (which are not the same as gravitational waves). Gravity waves occur when a fluid material (liquid, gas, or plasma) is disturbed out of a position of equilibrium. The bulge was able to withstand the sulfuric acid winds on the surface of Venus, something only a force like a massive gravity wave could do.

Venus, despite the crazy fast winds on its atmosphere, actually rotates painfully slow — slower than the amount of days it takes to complete its orbit. The scientists think that the winds, combined with the planet's towering mountain ranges, could've generated the gravity wave. The surface winds created the gravity wave when they pummeled into the Aphrodite Terra mountain range, a 4,500-meter (14,764 feet) high terrain near Venus' equator.

"We suppose that highlands are a key to generating the stationary gravity waves, because most of the bows - and we have found more than 15 bows so far - have appeared above the highlands at their centres," said Makoto Taguchi from Rikkyo University, speaking to Wired.

There is a problem though. Nobody's ever expected gravity waves to be generated at such a massive scale. Furthermore, it's not clear how gravity waves can rise so high above the surface of Venus. Still, the discovery of the bulge can help explain Venus' equally strange rotation occurs.

"We don’t entirely understand how the atmosphere comes to this super-rotating state, but gravity waves are one contributing factor," University of California, Los Angeles geophysicist Gerald Schubert told Wired. "The feature probably arising at least in part by gravity waves will tell us more about the role they play in the atmospheric dynamics."

Read This Next
Life on Venus
MIT Scientists Say Life May Have Been Detected on Venus After All
Venus Life Trap
Research: Jupiter Likely Turned Venus Into an Uninhabitable Hellhole
Can't Even
Scientist Behind Venus Life Claim Describes It as "Crazy"
Venus Smells Like Rotting Fish
Breaking: Researchers Discover Signs of Life on Venus
Futurism
6 Surprising Facts About Venus, Earth's Evil Twin
More on Hard Science
Quacks Like a Duck
Yesterday on futurism
Those Headlines About Scientists Building a Wormhole Are Total Nonsense, People
It From Bit
Nov 22 on the byte
A Scientist Is Crowdfunding an Experiment to Check if We Live in a Simulation
Water Carrying
Nov 20 on the byte
Evidence Grows That Soggy Meteorites Gave Earth Its Oceans
READ MORE STORIES ABOUT / Hard Science
Keep up.
Subscribe to our daily newsletter to keep in touch with the subjects shaping our future.
+Social+Newsletter
TopicsAbout UsContact Us
Copyright ©, Camden Media Inc All Rights Reserved. See our User Agreement, Privacy Policy and Data Use Policy. The material on this site may not be reproduced, distributed, transmitted, cached or otherwise used, except with prior written permission of Futurism. Articles may contain affiliate links which enable us to share in the revenue of any purchases made.
Fonts by Typekit and Monotype.