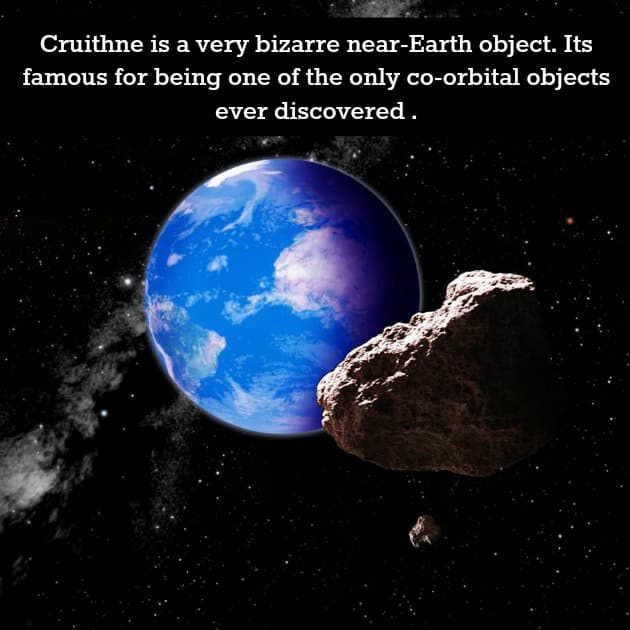 You’ve never heard of Cruithne? Well, that’s not terribly surprising. It’s a tiny object, roughly 3 miles (5km) in diameter. This is a bit larger than what we normally consider a near-Earth asteroid to be (honestly, we would all die terrible deaths if it ever hit Earth); however, compared to a majority of the asteroids that have been cataloged, Cruithne is rather small. It’s also rather far away. Cruithne won’t come closer than 28 million miles (45 million km) for the next few centuries.

Since it is so small and distant, Cruithne is kind of easy to miss. In fact, even though it was around long before humans started recording history, Cruithne wasn’t discovered until 1986 (poor thing, the little guys always get overlooked). Nevertheless, Cruithne is important because it is one of the few co-orbital objects ever discovered (co-orbital = shares Earth’s orbit around the Sun). The unique relationship between Earth and Cruithne has caused many to refer to this tiny speck as “Earth’s second moon.”

No. Absolutely not. Just…no  Cruithne is not Earth’s second moon because it orbits the Sun (though, fun fact, at any given time, Earth has two or more "moons"). The quotation marks are there because it is important to note that these "moons" aren't moons in the traditional sense, but natural satellites. And Cruithne doesn’t orbit the Earth, not even a little bit.

So, What Would a Day on Cruithne Be Like?

It would be interesting, provided, of course, that you like to look at rocks. If you don’t like to look at rocks (or the tiny specks of dust that broken rocks leave behind after they crumble) then a day on Cruithne would be boring—terribly, terribly boring. Since the asteroid is only 3miles (5km) in diameter, there’s not much to see on Cruithne. No geysers, no major craters. Just rocks.

Cruithne’s escape velocity is roughly 8.5 feet/second (2.6meters/second), which means that most healthy adults will be able to jump off the asteroid!! I’m not really sure why you would want to jump off an asteroid; I imagine that aimlessly floating about in space would get rather boring. Plus, if you jumped off the asteroid, how would you get back to your rocket for your return trip?

But if you like rocks and want to jump off an asteroid (and possibly float about space for millennia), Cruithne will be heavenly.

For similar articles, see "A Day on Titan," "A Day on Phobos: Mars' Moon," or "A Day on Sweeps-10," A Day On Venus. For non-related reading, see "Itokawa: A Strange Space Peanut," Ceres: The Asteroid Turned Minor Planet," or "And the Asteroid Said: “I’m Falling to Pieces…”