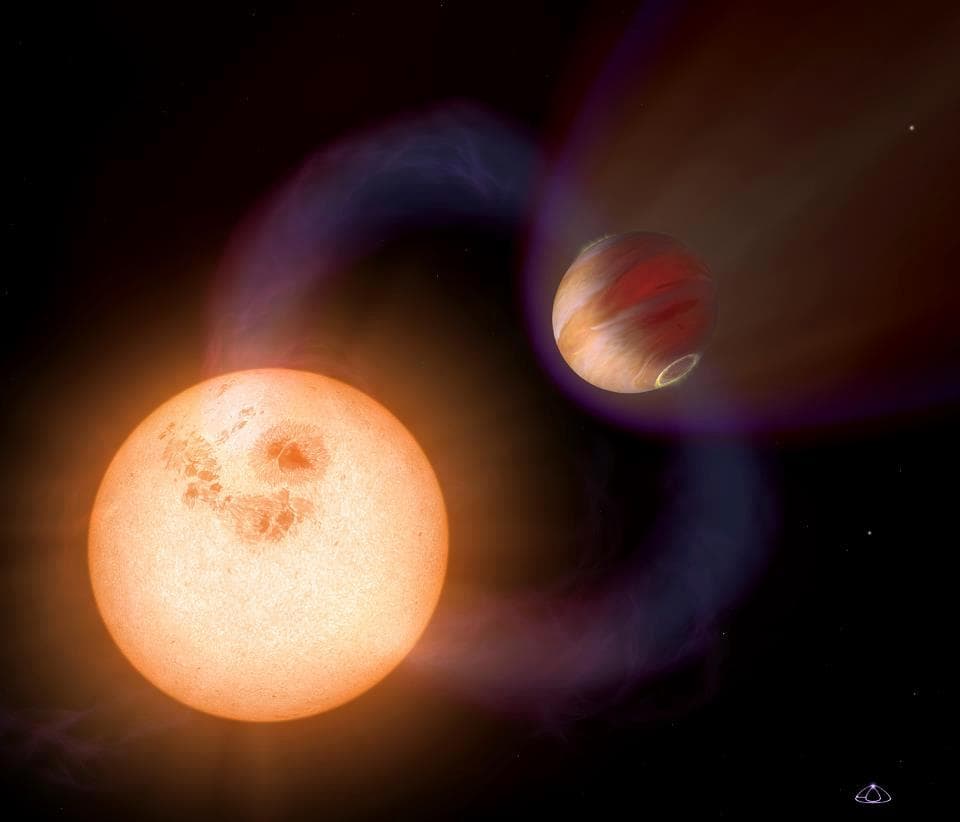 *Editor’s note: I would like to apollogize in advance for the excessive use of astronomy puns. I got distracted by a butterfly and they all snuck in. I really didn’t planet; they just happened. But don’t worry, we’ll make a game out of it: see if you can spot all the puns….

Are you sick of winter? Hoping to spend a bit of time in the Sun? Then I would like to talk to you about Sweeps-10, a fantastic exoplanet that has everything our frigid planet so often lacks. Looming in the constellation Sagittarius, a little over 6 thousand light-years from Earth, there is a small and unassuming red dwarf. Only half the mass of our Sun, this star seems like a tiny flare compared to some of the stellar infernos that dominate our universe. Because the dim light from this dwarf is so unimpressive, many would pass by without so much as a second thought.

But not you and I. We know better. Orbiting around this pint-sized star is a planet that is out of this world. It is a mammoth gas giant known as Sweeps-10. This planet is huge. At roughly 1.6 Jupiter masses, it dwarfs every planet in our solar system. This behemoth has a diameter that is 1.24 times that of Jupiter. It could hold roughly 1,500 Earths; it could swallow every planet in our solar system and still have room to spare... but although Sweeps-10 has some rather impressive stats, it’s not quite as impressive as, say, TrES-4—an exoplanet that has a diameter which is about 3.4 times that of Jupiter. But size isn’t everything. Sweeps-10 has its own claim to stardom.

Remember when I asked if you were looking to spend a bit of time in the Sun? Well I was being rather literal. Sweeps-10 orbits a mere 745,000 miles from the blazing solar surface (1.2million km). In order to maintain its orbit, and keep itself from being consumed by its star, Sweeps-10 has to move at unearthly speeds. As a result, it has the shortest orbital period of any known planet…10 hours.

This means that a year on SWEEPS-10 is 835 times shorter than Earth's. So if you were born in 2000, you would already be 10,855 years old. Of course, the desire to travel to another planet is universal, but Sweeps-10 orbits extremely close to the solar surface, and this is a problem that siriusly mars our plans for a day trip.

To better understand the issue, let us, for a moment, consider the Sun:
The coldest part of our life-giving fireball (the sun, for those of you who prefer less poetic terminology) burns at a searing 9,940°F. By Earth’s standards, that is rather hot. So, how close can you get to the sun before things start to get…a little too heated? A spacesuit will keep you comfortable as long as external temperatures don’t exceed 248° F (112°C). If you space out and venture beyond that, you’ll find yourself in hot water rather quickly.

Fortunately, the heat that the Sun radiates is rapidly dispelled in the vacuum of space. So you could get within 3 million miles of the solar surface, any closer than this and the heat will quickly transform your spacesuit into a state -of-the-art sauna. This sounds like fun, but the temperature inside your suit will swiftly exceed 125°F (51°C) and you'll be cooked alive. Fortunately, you’ll probably get dehydrated and pass out, so you won’t be conscious for the whole horrific experience.

But of course, you won’t be flying to this planet in a spacesuit (that would be silly), you’ll be traveling in a shuttle (much more sensible). The ship’s reinforced heat shield can withstand sustained temperatures of up to 4,700°F (2,500°C). Provided that the shield wraps around the entire shuttle, then you can fly to within 1.3 million miles of the Sun’s surface (2million km). However, the shield really doesn't work so hot at these temperatures, and the integrity degrades rapidly above 4,700°F. The shielding would quickly crumble, turning the ship into a solar rotisserie before exploding. Totally not cool.

And that’s at 1.3 million miles. Sweeps-10 is just a fraction of that distance from the surface of its sun (about ½). So you think that only a Luna-tick would want to travel to this planet? Well, fortunately for us, red dwarfs are a bit cooler than main sequence stars like the Sun. Generally, they are only about 5,600°F (3,100°C), which means that we can probably get close enough to actually reach this planet.

Isn’t that just stellar? Unfortunately, the planet itself is about 3,000 degrees Fahrenheit (1648°C). So don't get out of your space shuttle, or you will die a terrible, terrible death. But I’m sure you’ll have some great views form the shuttle (just make sure you get a window seat and it’ll be an awesome trek).