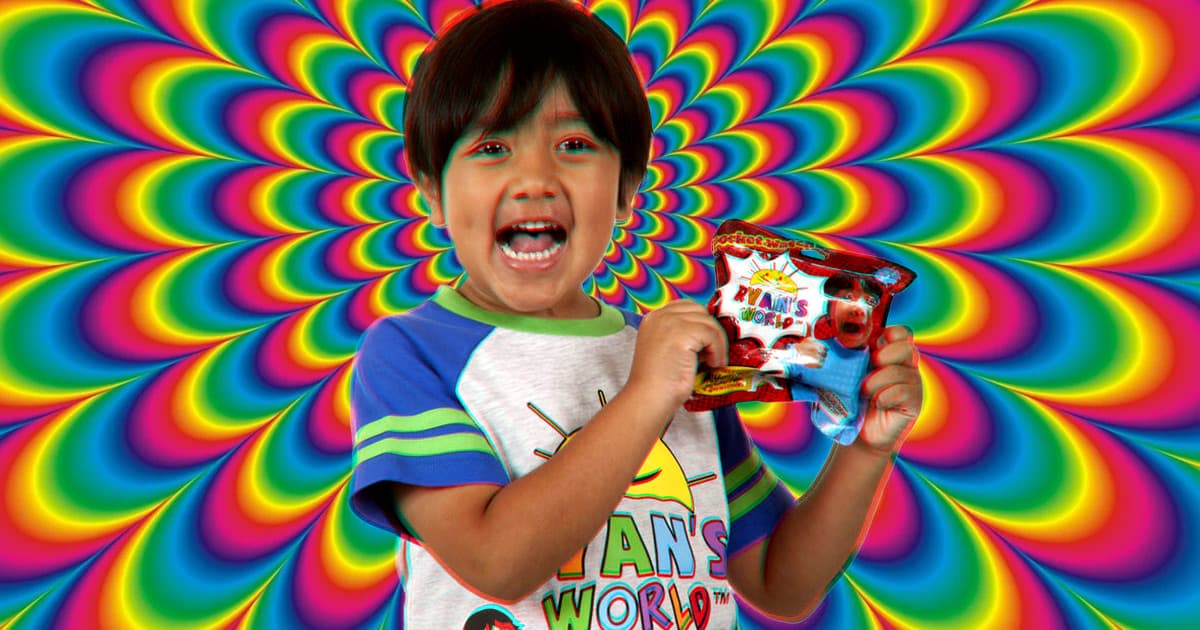 Still scrambling to find gifts for your younger loved ones this holiday season? You might want to visit "Ryan's World."

That's the YouTube page of eight-year-old Texan Ryan Kaji, whose videos of toy reviews and other childhood shenanigans earned him a mind-boggling $26 million in 2019, according to Forbes — enough to make him YouTube's top earner for the second year in a row.

Forbes considers the pretax income YouTubers collect through advertising, sponsorships, merchandise sales, and other sources to create its annual list.

Kaji wasn't the only minor to make the cut this year, either. YouTube's third-highest earner is Anastasia Radzinskaya, a five-year-old Russian with cerebral palsy and seven YouTube channels. An additional five of YouTube's top earners aren't kids, but they are gamers who often showcase content popular with youngsters, such as "Minecraft" and "Fortnite."

It's not entirely surprising that YouTube's kid-focused content is some of its most popular — and, therefore, most profitable.

A nationally representative 2018 Pew survey found that an overwhelming 81 percent of parents with kids under the age of 11 let their offspring watch videos on the platform, with 34 percent saying their children visit the site regularly.

There are 33.7 million households in the United States with members under the age of 11, according to United States Census data — so that means a vast number of tiny eyeballs racking up views on videos like Kaji's.

And none of this means you should take the success of YouTubers like Kaji as an indication that you, too, could quit your day job and become a multi-millionaire by pumping out kid-friendly video content.

"The vast majority of people who start a YouTube channel, or engage in any career as an influencer, won't make it," internet culture writer Chris Stokel-Walker told BBC News. "96.5 percent of YouTubers don't make enough from advertising revenue alone to break the US poverty line — and with the number of creators on the platform constantly increasing, the competition is only getting tougher."

Read This Next
Copyright Beats
Iconic Lofi Hip Hop Girl Videos Taken Down by Copyright Strikes
Against the Stream
YouTube Sues Man for Allegedly Swatting a Minecraft Streamer
Too Soon
YouTube's Autocomplete Feature Has a Huge Spoiler Problem
'Tube Trouble
While Pedophiles Flock to YouTube, Advertisers Flee It
Flat Affect
New Research: YouTube Caused The "Flat Earther" Epidemic
More on Future Society
Ctrl C Ctrl V
Yesterday on the byte
Inspired by Twitter's Struggles, Facebook Considers Making an App Where You Can Post Text. Wait a Second...
Sleeping Tweeps
Yesterday on the byte
Elon Musk Installs Washing Machine at Twitter HQ So Overworked Employees Can Wash Their Filthy Rags
Phoney Business
Wednesday on the byte
Amazon Says It'll Pay You $2 Per Month to Spy on Your Phone's Internet Traffic
READ MORE STORIES ABOUT / Future Society
Keep up.
Subscribe to our daily newsletter to keep in touch with the subjects shaping our future.
+Social+Newsletter
TopicsAbout UsContact Us
Copyright ©, Camden Media Inc All Rights Reserved. See our User Agreement, Privacy Policy and Data Use Policy. The material on this site may not be reproduced, distributed, transmitted, cached or otherwise used, except with prior written permission of Futurism. Articles may contain affiliate links which enable us to share in the revenue of any purchases made.
Fonts by Typekit and Monotype.