What Is Particle Physics: Part 2 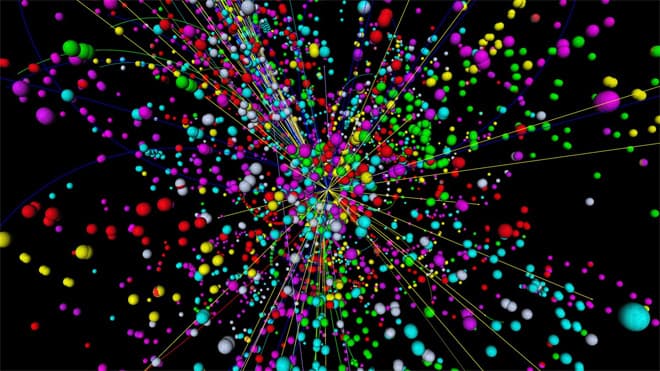 The Standard Model is the theory that describes  the interaction of forces affecting subparticles, like electrons and quarks. Although this physics deals with the major forces that govern our universe, it often seems disconnected from us--like it belongs to another reality. In truth, understanding the Standard Model is a necessary part of understanding our universe; it is the best thing that we have at our disposal when trying to make experimental predictions.

So let's take a moment to get to know the Standard Model, and the universe, a little better.

In the Standard Model, bosons transmit the forces. In other words, they carry the energy that governs all the interactions that we see in the world today (except gravity). Bosons differ from fermions because they do not abide by the Pauli Exclusion Principle (PEP). They can overlap each other, or in technical terms, share the same quantum state. When we make a laser, we get a concentration of bosons like this. Lasers are strong concentrations of overlapping photons, but theoretically, a laser can be made of any boson.  This quality of bosons, the quality of not obeying PEP, is observed by us everyday (beams of light do not crash into each other everywhere we look, thus they can overlap).

The known bosons are as followed: the W+ and W- boson, the Z boson, the gluon, and the photon. These particles are known to have integer spin (1), or spin 0 for the special case of the Higgs Boson.  The theoretical graviton would have an integer spin of (2).  It has yet to be found, possibly because its strength of interaction is many orders of magnitude weaker than the other forces.  Finding the graviton has been the subject of intense work for many years.

Quarks have a different form of electric charge, which is called "color property."  Quarks come in red, green, and blue colors; anti-quarks carry anti-colors. Physicists use the red, green, and blue color analog to help us understand how nucleons form (the colors combine to make white light, or in this case, a stable nucleon). This color analog doesn't work  terribly well with the quarks, but the important thing is that you remember that it is describing a property of energy.

Gluons are massless.  They mediate the strong force by this color exchange, and have one color and one anti-color (just enough to swap and, thus, conserve color charge with quarks). Mesons also form hadrons, but with only a quark and an antiquark bonded, with color charges that are opposite of each other (like green and magenta).

The strong force is the strongest known force.  It creates "flux tubes" between quarks in any hadron. Flux tubes are areas of calmness in the hadron produced by the immense amount of energy of the strong force binding it together.  In the craziness that constitutes something like a proton, the flux tubes are the only areas not consumed with excitations in the gluon field.  In a nucleon they form a "Y" shape, not a triangle as sometimes depicted.  If you try to separate the flux tube by adding energy to separate the quarks, you just end up creating another quark pair to attach on either end of the flux tube you were trying to separate. Outside of the nucleons themselves, but binding separate protons and neutrons  together, you get another strong force interaction.  This is mediated by the pi meson or pion.

WATCH: Your Mass Is Not From the Higgs Boson

Probably the most familiar force is the electromagnetic force, this force is mediated by photons and describes the mindbogglingly accurate quantum field theory of QED, or quantum electrodynamics.  Its mediator is called a photon, and it is massless, meaning that it is travelling at the speed of light.  The mathematical relationships QED describes are the most precise theory humans have ever discovered, and responsible for almost every technological advance in the 20th century.  That's no small feat.

It is the second strongest force, but it is only 1/137 of that of the strong force; however, it works over much farther range.  If the electromagnetic forces were not in an intricate balance with the strong force, atomic nuclei would fall apart.  This means no atoms, no molecules, thus no chemistry, and no biology!

The weak nuclear force is partly responsible for the slow burning of stars.  Without it, our planet would not have the energy it needed for liquid water to form and for life to arise.  The weak force is mediated by the Z and W bosons.  W boson carries away charge and energy in radioactive decay, the Z boson transfers energy in the form of momentum to neutral particles, like neutrinos. The Z boson is its own antiparticle (which means it does not have one).  The fact that the photon was massless but the Z and W bosons were not caused physicists quite a headache, and no one originally knew why this was the case.  This was finally resolved by what is called the "Electroweak unification."

The strengths of force interactions can depend on the 'temperature', or speed/energy of the interaction.  At room temperature, the massive Z  and W bosons (91 GeV and 80 Gev respectively) do not play an important role.  But at the extremely high energies of 1000 (GeV), the W, Z, and photon all become unified.  This is all explained accurately in the Electroweak theory of the Standard Model.  However, as the temperature drops, symmetry is subsequently broken and bosons are divided up into the W and Z bosons and the photon.

The high energy physics of the Electroweak theory is important because it provides a model of cosmology for us.  We know all the forces were unified at the beginning moments of the big bang (see a previous article on cosmology here).  Using this as a guide, we can make predictions about the beginning moments after the universe's inception, including problems like the matter/antimatter asymmetry in the quark gluon plasma.  The quark gluon plasma is what expanded, which subsequently cooled it, giving us free roaming photons (visible light) and particles to form all the matter in the universe, shown to us by the cosmic microwave background radiation.

The Higgs boson itself is a particle byproduct for the Higgs field.  The discovery of this particle was the culmination of half a century of work and progress. The higgs was finally confirmed in 2013 (after its initial discovery in 2o12).  It imparts all subatomic particles with their mass as they travel through this Higgs field.  This resistance to inertia, this drag, is how they acquire their intrinsic masses.  Whether or not another Higgs field (and its corresponding boson) exists is a valid question.  But it is extremely unlikely for it to be another similar Standard Model Higgs (like a higgs with similar mass).  It would be field and corresponding boson with completely different properties.

*This is the second installment to this series about the Standard Model.  You can find the first one here. (You can find a comprehensive source to these articles by the free PDF download link from Cornell university found here.)

Want more information? Sources have been attributed throughout this article as embedded links. Click any one to be taken to the source and learn more.