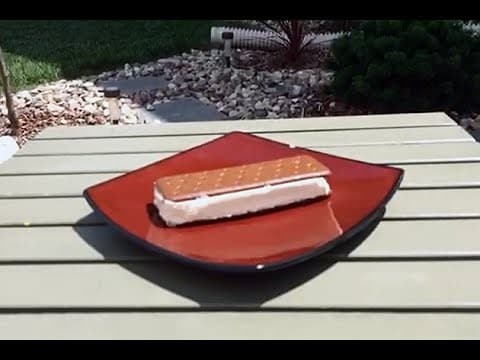 It's not sorcery. It's science.

According to Watson, it was approximately 80°F at the time (26.6°C). Such temperatures are certainly hot enough to melt the kind of ice cream that most of us are familiar with. This left Watson stupefied.

Perhaps she read the labels wrong. Perhaps, when she thought she was purchasing ice cream, she was actually buying some kind of strange candy. She checked the label to test this hypotheses. "I looked at the box," Watson reports, "and it doesn't say 'artificial ice cream.' It says 'ice cream.'" So like any good scientist, Watson decided to test another ice cream bar to double check her previous results. She took another ice cream sandwich and left it sitting out overnight.  The next morning, she discovered that the "ice cream" still hadn't melted.

This should cause a bit of concern for ice cream enthusiasts.

As most of us probably already know, ice cream is a delicious frozen treat that is (most often)  made from dairy products. You take some milk or cream, add sugar and other flavorings—and BOOM—you've got ice cream. Admittedly, in some instances, artificial flavorings and colors are added. However, most would not suspect that artificial ice cream was being added to ice cream sandwiches. Could that be what is happening here?

Dan Collins, of KIKN 100.5 in Sioux Falls, tested a number of different frozen snacks to see if the phenomenon of non-melting ice cream was a problem that extended beyond Walmart's version of ice cream. He obtained a Walmart Great Value sandwich, a Klondike Bar sandwich, and a cup of Haagen Dazs. At room temperature, all of these should melt in no time. Collins left them in the hot sun for 30 minutes. Here are his results:

So, how is this possible? In a statement, Walmart asserts that the cause is (for some inexplicable reason) the cream that is used in their ice cream:

In reality, it seems that gum is to blame. Haagen Dazs contains just cream, milk, sugar, eggs, and vanilla. Walmart's ice cream sandwiches (and to a lesser extent, Unilever's Klondike Bars) contain "stabilizers" of guar gum and cellulose gum. Ultimately, these gums are what cause the ice cream to keep its shape and remain un-melted. The gum minimizes the amount of ice crystals that can form in the ice cream, and so it helps the ice cream keeps its consistency.

It may sound a tad horrifying, but nutritional scientist and culinary professor Grace Yek asserts that there is nothing wrong with these ingredients: "Stabilizers have gotten a bad wrap because it's foreign, and sounds suspect. They are fine, for normal average consumption." Yek also notes that Walmart's stabilizers of guar gum and cellulose gum are plant-based, and that the FDA considers them safe.

So despite the slower melting time of the Walmart ice cream sandwiches, they are just as healthy as other ice cream and meet all FDA guidelines. Still, there seems to be something a little...off-putting with ice cream that does not melt. Ultimately, when you get to the food aisle, the choice is yours. Choose wisely (read the ingredients).

Watch the original report below: