What would Pangea look like with Current Geopolitical Borders? 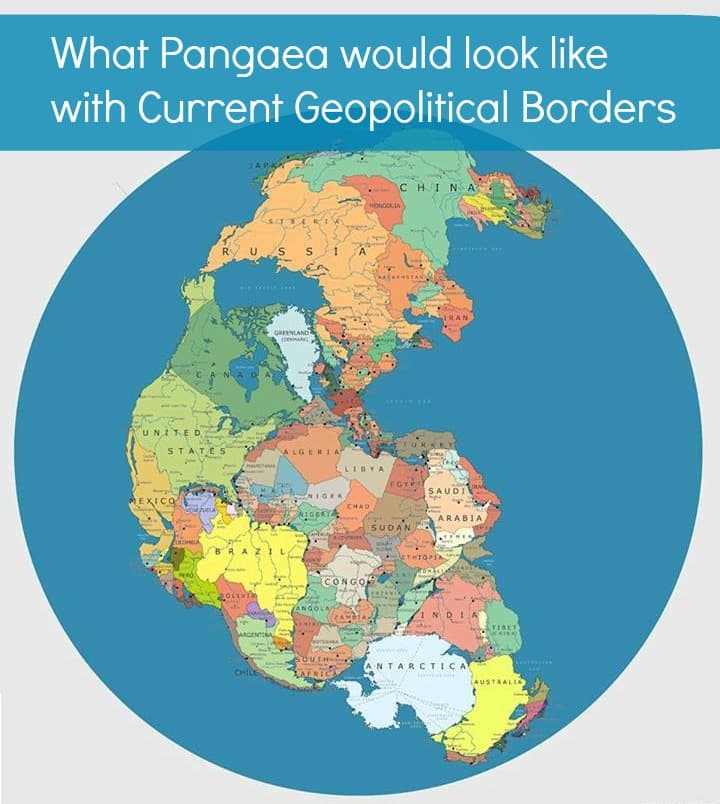 Most people are pretty set in their ways. We all have our patterns, and they work quite well for us. So when something comes along that disrupts our patterns, our lives are thrown into disarray. We've all had some variation of this scenario happen to us (if you haven't, oh how I envy you): You’ve had the same neighbors for 15 years. Every morning, you go out and get your paper at 7:45. You neighbor goes out to get his paper at 8. That way, you don’t have to see one another in your bathrobes, and you can avoid the awkward small chat that you would be forced to make if you met in a pre-coffee daze. Unfortunately, your neighbor is moving. And you try and convince yourself that it’ll be okay, that having a new neighbor can’t be that bad. But it’s not okay, and it is that bad.

Before you know it, you’re standing at the end of your driveway at 7:45 fumbling about for things to say about the weather, or the grass, or some sports team (but you don’t watch sports, so you make some lame comment about this one halftime show that you saw 6 years ago that had pretty neat fireworks). And your peeking out the curtains like a caffeine deprived spy, dashing out of the house to retrieve your paper, and desperately trying to sprint back inside before you’re seen in your bathrobe. And all the while you’re wondering how your life got to be like this, everything seemed to be going so well... For the most part, we don’t like change. The unfortunate bit is that everything is always changing, and it has been throughout all of the Earth’s history. Of course, many of these changes take place over such a long stretch of time that we don’t perceive them, but looking at them helps us to understand the bigger picture. The attached image shows you what your bit of the world would be like if you lived on the great supercontinent 300 million years ago—Pangea.

And, as it turns out, your neighbors would look pretty different.

If you lived on the East coast of the United States, you wouldn’t watch beautiful sunrises over the Atlantic Ocean. Instead, you’d watch the sunrise over Africa. If you lived in Ireland, you would be attached to England along with Iceland, Norway, and France. Moreover, if you lived anywhere in Ireland or the UK, France would only be a tiny bit closer than Canada. And Australia wouldn’t be its own continent. It would be jammed together with Antarctica and Tibet (China would be far off on the other side of the landmass). Mexico would be more to the West, and less to the South, of the United States. Canada and Russia would be separated by a sea, and many of the world's islands would be in a hodgepodge off the edge of China. So, the next time a minor change gets you all in a huff, just remember that change happens all the time and on a much larger scale. In some ways, our lives are not nearly as repetitive and stable as we'd like to believe. It's not just the continents that are moving... Every second, the Earth travels 30 kilometers about the sun (some 18.6 miles). Every hour, we travel 107,826 km or 67,000 miles. Moreover, our solar system--Earth and all the various planets and moons that comprise our system--whirls around our galaxy some 220 km each second (137mi). We swing across the Milky Way 788,578 km each hour, that’s 490,000 miles per hour. The galaxies in our neighborhood are also rushing at a speed of nearly 1,000 kilometers per second towards a structure called the Great Attractor (621mi/s). So every second quite literally brings you to a place you’ve never been before...it’s a fun fact to ponder.