What Happens When a Black Hole Runs Out of Fuel? 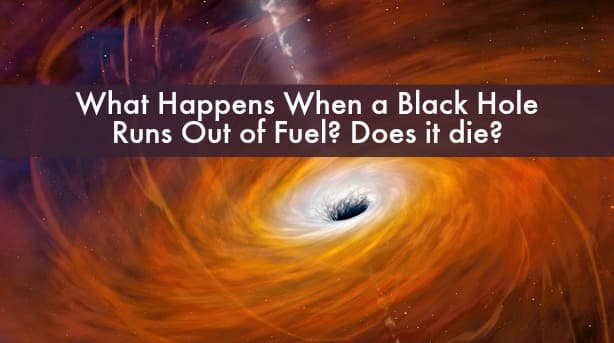 To start off with, this wont be a problem for a very, very long time for any black hole. But if/when it does happen, there are two ways you could predict the black hole's behavior. The less technically accurate one is that the black hole would begin to lose mass, until eventually, it disappears. To be more accurate scenario says that absolutely nothing would change, but the black hole would still be losing mass. This is because of two things that exist with black holes, regardless of the inflow of energy.

The first hypothesis — put forth by Leonard Susskind, the Director of the Stanford Institute for Theoretical Physics.— states that quantum fluctuations in a black hole, if violent enough, could cause certain amounts of mass to be separated from the black hole. The second was proposed by Stephen Hawking, who brilliantly hypothesized that black holes have entropy, therefore they must emit radiation (this requires energy, which takes from the total mass-energy of the black hole and reduces its overall mass).

The Veracity of Susskind's Idea:

Given our current understanding of black holes and quantum mechanics, Susskind's idea has very little room for error. Quantum fluctuations are bound to happen, and under certain conditions, they could cause (likely very small) "chunks" of the black hole to tunnel away in an annoyingly slow manner. However, the amount of time required makes it impossible to calculate due to the probabilistic nature of things. But even with the ambiguity over time aside, this will still take a great many years to come to a conclusion. By which, I mean you could spent a good fifty billion years watching a black hole and still not notice any shrinkage in the Schwarzschild radius (or the event horizon).

Hawking's idea is much easier to calculate, but it is still extraordinarily slow. By adding entropy (heat) to black holes, we know that they emit radiation. This process is called evaporation. So according to Stephen Hawking, black holes do evaporate. The radiated light from a black hole is called Hawking Radiation, which is a theoretical type of black body radiation. One bit of information (information in science is critically related to entropy) is equal to one square plank unit in the Schwarzschild radius of the black hole. One photon is typically considered to have the information value of one bit, so for every photon emitted by the black hole, it loses one square plank unit in its Schwarzschild radius. So you know, that is about 10^-70 meters; a very small number.

How Quickly They Deteriorate:

So we've established that black holes can lose energy by emitting light. This has an inherently minuscule impact on the Schwarzschild radius, but in the end, how much of a difference it makes really depends on how hot a black hole is (we know that the hotter an object is, the more light it emits). The problem is that black holes are incredibly cold (they are certainly among the coldest things in all of existence, and are far colder than anything else we know of). Not only that, but we know that bigger a black hole is, the colder it becomes. So not only does this cause only a minimal change in the Schwarzschild radius in the best of scenarios, bigger black holes will also automatically evaporate at a slower rate than smaller ones.

Both of these happen (or can happen) continually in a black hole's existence, however neither one of them will actually be able to reduce a black hole's mass because of the current input of energy. If there was a situation where absolutely no energy was put into a black hole, it would pretty much stay the same. Over an absurdly mindbogglingly long period of time, a black hole could cease to exist, but on any possible practical time scale, a black hole would not experience any relevant reduction in size.

In other words, though not immortal, black holes are here to stay.