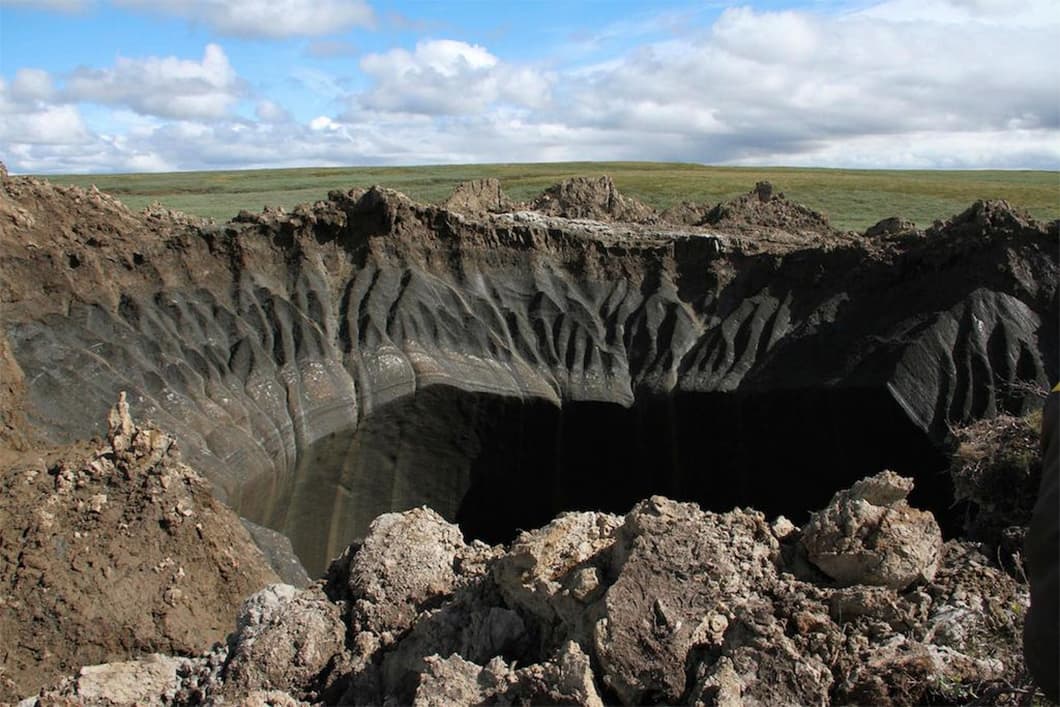 A team of researchers from Russia's Center for the Study of the Arctic and the Cryosphere Institute of the Academy of Sciences are expected to head out on an expedition to the so-called "end of the world" later today to explore the origin of a massive hole that seemingly appeared out of nowhere last week.

The large hole was initially discovered on July 11, 2014, in a remote part of the Yamal (translating to "the end of the world") Peninsula in northern Russia, which encompasses some 700 kilometers (435 miles) of land and water. Experts believe the might span about 79 meters (262 feet) across, which would be spacious enough "for several Mi-8 helicopters to fly into." The depth is unknown at this point, but it might end up being just as deep as it is wide, which has left everyone thinking the same question:

What kind of natural phenomenon could leave such a huge hole without an equally large bang?

Some suggest that a large space rock survived the trip through Earth's atmosphere and crashed into the Siberian permafrost. Though this theory seems extremely unlikely, a similar event did take place just last year, with a meteor brighter than the Sun wreaking havoc in Chelyabinsk, Russia. Conspiracy theories also abound, with many insinuating that the crater was left behind by a UFO that landed on Earth because, well, aliens.

However, some experts have put forth scenarios grounded in actual science.

The Siberian area the crater was found in — the Yamalo-Nenets Autonomous Region, which lies approximately 32 kilometers (20 miles) from the Bovanenkovo gas field — is one of the most geologically young places on Earth. It also happens to be extremely rich in gas. In fact, it contains the largest natural gas reservoir in all of Russia. It might even be the largest gas reserve on the planet.

In places with such large concentrations of gas, it's not unusual for underground explosions to rocket off. They occur only when under-soil ice melts and releases a substantial amount of gas. Once the pressures are sufficient, they blow in a manner comparable to popping the cork off a champagne bottle — a scenario that seems to be playing out far more often thanks to the aid of global warming.

In aerial photos, the researcher saw a few things that would support the "underground gas explosion" hypothesis. These include a distinct darkening around the inner rim of the crater, which points to some type of large explosion. Another telling thing deduced from the photos is that debris from the event, whatever the cause might have been, didn't collapse into the hole itself, but was thrown outward.

Another alternate scenario has been suggested by Dr. Chris Fogwill, a polar scientist from the University of New South Wales. He claims what looks like a run-of-the-mill crater might actually be an extreme example of something called a pingo. Pingos are essentially created when huge chunks of underground ice push their way up to the surface and melt. Oftentimes, if the blocks are large enough, they can leave spectacularly huge holes behind.

“We’re seeing much more activity in permafrost areas than we’ve seen in the historical past. A lot of this relates to this high degree of warming around these high arctic areas, which are experiencing some of the highest rates of warming on Earth,” Dr. Fogwill told the Sydney Morning Herald.

When the team members — including a specialist from Russia's Emergencies Ministry — arrive to survey the environment, they plan to collect soil and water samples, as well as do an assessment of the air. Hopefully, this will help shed some light on where this hole came from before the internet ventures into rogue black hole territory (as we've seen time and time again, people are weird like that).