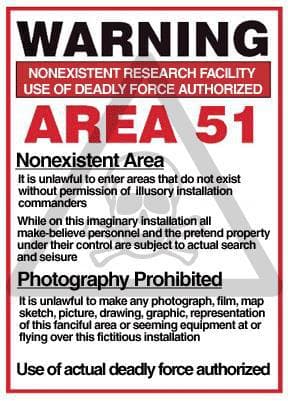 For decades, Area 51 was one of the governments worst kept secrets – a secret military base that everyone knew about. A recently declassified CIA document has now confirmed the existence of the ‘secret’ military base in the middle of the Nevada desert making the inner conspiracy theorist in us all jump with glee. Unfortunately, happiness turns to sorrow because the CIA still hasn’t released any documentation that Area 51 has been visited by extraterrestrials, nor that any alien spaceships crashed in the desert in the 40s, nor that humanity has received any sign of the existence of aliens whatsoever.

Of course, everyone knows first contact will really happen in the middle of Montana in 2063, but we’re talking about Roswell right now.

The declassification of Area 51, whereas is disappointing for conspiracy theorists (of course, the government is still covering it up), is still a fun event for alien enthusiasts (like myself) and a very interesting study of human psychology. In actuality, as many people have deduced, Area 51 was/is a testing ground for experimental military aircraft. During the cold war, Area 51 was the main base of operation for test flights of the U2 spy plane.

The U2 flew around 80,000 feet, making it the highest-flying aircraft of the time (and one of the highest flying planes of all time). For comparison, commercial planes at the time flew between 10,000 and 20,000 feet while other military aircraft (such as the B47) could fly at 40,000 feet (commercial airliners today can fly around 40,000 feet).

Unsurprisingly, the document claims, “High altitude testing of the U2 soon led to an unexpected side effect – a tremendous increase in reports of unidentified flying objects.” The U2 displayed many of the characteristics attributed to alien UFOs and often appeared like fiery objects in the evening sky (this allowed the wings of the U2 to reflect sunlight back to Earth).

According to the CIA, military test flights “accounted for more than one-half of all UFO reports during the late 1950s and most of the 1960s.” Area 51 has also been responsible for testing the SR-71 Blackbird, the F-117A fighter, and the B2 bomber.

Maybe, sometime in the future, the CIA will finally acknowledge the UFOs that landed in Roswell. I mean, with Justin Beiber running around, it’s only a matter of time before somebody runs a genetic test on him to determine that he an alien fugitive and the CIA has been helping him hide.