The Bug-Inspired Robot That Can Jump On Water 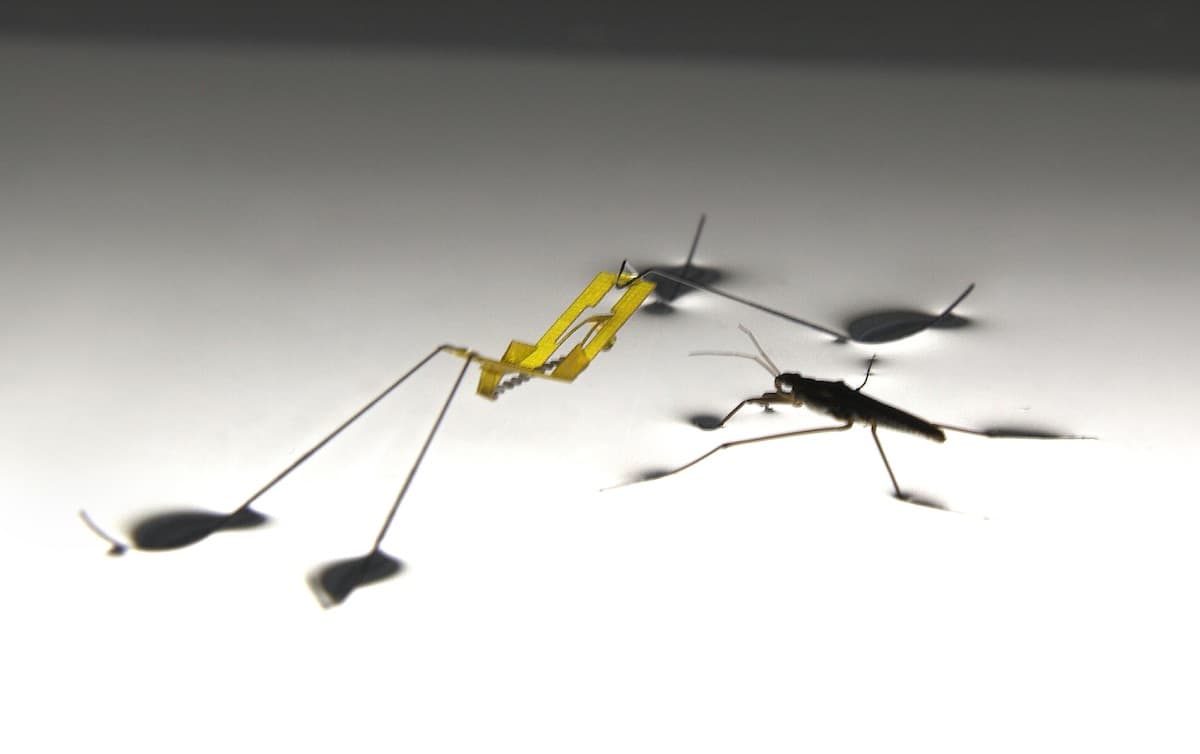 Perhaps as a child, you recall gazing at water striders on a lazy summer day. These pond insects appear to, seemingly against all odds, glide across the water—even jumping sometimes. By elucidating the water strider's secrets, researchers have covered new ground in the field of robotics. This week, a paper published in Science details the latest innovation: a small robotic insect that can vertically jump on the surface of water.

In order to create this robot, scientists first had to learn how water striders achieve the laudable feat of jumping on water. After collecting water striders from ponds, they used a high-speed camera—one capable of recording 3,000 frames per second—to closely monitor the creatures' movements.

Ultimately, above all else, the researchers found that the force inherent in the surface of water is key: to float and jump, they simply must avoid breaking the surface tension. As you can imagine, this is easier said than done, but fortunately, they have light bodies and water-resistant legs, which make them suitable for the task.

Furthermore, the researchers found that the insects rotate their four rear legs when jumping. This precise motion ensures that the legs continuously meet undisturbed water. And because the insect's legs are slightly curved and remain in contact with the water as long as possible, they can quickly and efficiently lift off.

“Water’s surface needs to be pressed at the right speed for an adequate amount of time, up to a certain depth, in order to achieve jumping,” reported Kyu Jin Cho, the study’s co-author. “The water strider is capable of doing all these things flawlessly.”

The trick is getting it just right. “If you apply as much force as quickly as possible on water, the limbs will break through the surface and you won’t get anywhere,” stated Dr. Robert Wood, co-author on the study. The water strider manages to apply just the right amount of force to lift off the water, without breaking through the surface tension.

Armed with their new knowledge, the team then created a robotic insect. Like the water strider, the newly designed robot is light and small, weighing only 68 milligrams. Its legs are also thin and flexible, made of a mixture of nickel and titanium.

To prevent the legs from breaking through the surface of the water, the ends were curved, and coated with a water-repellent material. In fact, the only striking difference between the robot and the water strider itself was the length of its legs, which are just 5 cm longer than those of their real-life counterparts.

How did the robot jump?

For this crucial task, the researchers relied on a relatively-simple catapult mechanism based on yet another insect—the flea. The jumping is initiated by a thin wire placed under the robot and heated by an external source; it activates the catapult and makes the legs sweep down and around.

Indeed the robots were able to jump 14 cm (or 5.5 inches) without breaking the surface of the water. Furthermore, the robots could achieve the same jump on land.

Like the insect it mirrors, this robot can perform these striking abilities without any complex controls. Cho points to the insect's natural structure for this simplistic function.

While robots have been designed to jump on land (take this jumping robot we recently covered), this is the first robot to jump on water (some can float, however).

Donald Ingber, M.D., Ph.D, the Founding Director of Harvard's Wyss Institute, was impressed with the findings.

“This international collaboration of biologists and roboticists has not only looked into nature to develop a novel, semi-aquatic bioinspired robot that performs an new extreme form of robotic locomotion, but has also provided us with new insights on the natural mechanics at play in water striders.”