Watch an Astronaut Show You How to Poop in Space

It's still "one of the most frequent questions we get about life on Space Station." 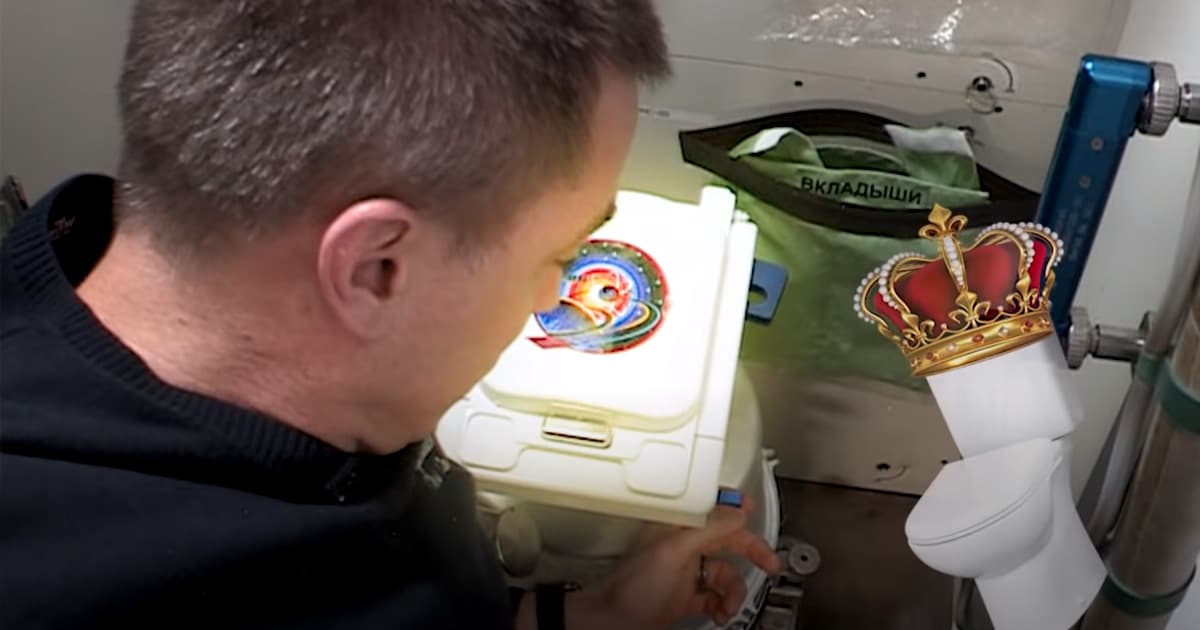 Bless NASA astronaut and former Navy SEAL Chris Cassidy for answering "one of the most frequent questions" that NASA gets about life on the space station: how to poop in space.

The station's Waste and Hygiene Compartment (WHC) is located in a little commode with a door — nestled between the treadmill and weight machine, as Cassidy is quick to point out.

It's an especially pertinent topic since the station received a brand new toilet on Monday called the Universal Waste Management System (UWMS) on board a Cygnus freighter, a pricey but much-needed upgrade.

For now, though, Cassidy took the time to explain how the old one works, for old time's sake.

Cassidy says that the feeling of needing to go is exactly the same in microgravity. And when nature calls, you float into the tiny space and close the door behind you for some privacy.

The WHC is a design that hasn't changed much over several decades. The experience is far from luxurious — the toilet itself is essentially a seat hooked up to a metal bucket. It holds about 30 "deposits," according to Cassidy. Once the container is full, it'll need to be replaced.

The opening is only five to six inches in diameter, so aim is important. A plastic liner catches the "deposit," or in the case of Cassidy's demonstration, pieces of green beans and mushrooms.

Urine is sucked up through a valve attached to the end of a long hose called the Urine Processor Assembly and operated with a tiny knob. Most of the urine actually gets recycled on the station through the Water Recovery System.

"And in case things go wrong, like the hardware, not yourself, there's the WHC Malfunctions Cue card," Cassidy explains, holding up a laminated sheet of paper. "The bottom line is, if there's a red light, we talk to the ground and together we figure out the path forward."

In fact, the station's previous WHC toilet experienced a malfunction in 2008, with the crew being unable to repair it. They had to resort to doing their business on board the Soyuz transport module — a low capacity system that quickly filled up. Luckily, replacement parts were shipped on board the Space Shuttle Discovery about two weeks later.

Fortunately, malfunctions involving the space toilet have been rare since then.

In February 2019, during the installation of a double stall enclosure for the UWMS, which was finally sent up this week, crews experienced a leak, releasing about 9.5 liters of water into the station before the problem was isolated, according to NASA. They had to resort to soaking up the mess using towels.

"So congratulations, you just used the WHC for the first time," Cassidy concludes in the video. "I hope it's educational, but I don't think it's gonna lessen the amount of times I have to answer that question."

More on the toilet: The International Space Station Finally Got Its New Space Toilet

Read This Next
Little Boxes
One Silly Little Detail Is Reportedly Delaying Artemis II by Years
Putting Things In Perspective
Amazing Artemis Photo Shows Every Human, Alive or Dead, Plus the Moon
Fighting Words
Retired NASA Astronaut Scott Kelly Dishes on Ukraine, Russia, and Moon Mission
Psychological Warfare
Experts Excoriate NASA Report Claiming James Webb Wasn't Homophobic
Big Impact
Meteorite Hit Mars So Hard NASA Thought It Was a Quake
More on Off World
Cubesat Death
Yesterday on the byte
Another Satellite Released by NASA's Artemis I Just Croaked
Kilonova Blast
Yesterday on futurism
Staggering Galactic Explosion Blamed on Black Hole Collision
Big Boi
Yesterday on the byte
Epic Artemis Video Shows the Astonishing Size of the Moon
READ MORE STORIES ABOUT / Off World
Keep up.
Subscribe to our daily newsletter to keep in touch with the subjects shaping our future.
+Social+Newsletter
TopicsAbout UsContact Us
Copyright ©, Camden Media Inc All Rights Reserved. See our User Agreement, Privacy Policy and Data Use Policy. The material on this site may not be reproduced, distributed, transmitted, cached or otherwise used, except with prior written permission of Futurism. Articles may contain affiliate links which enable us to share in the revenue of any purchases made.
Fonts by Typekit and Monotype.