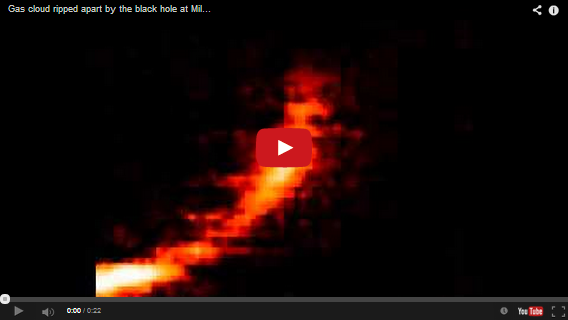 Modern astronomers believe that most large galaxies host supermassive black holes in their central region. Our galaxy, the Milky Way, is no exception. Sagittarius A*, which can be found more than 26,000 light-years from Earth, is our central black hole. This beast contains the estimated mass of approximately 4 million suns. Due to the nature of black holes, we can't actually see them directly; however, we are able to infer their existence through their interactions with their surroundings.

Unfortunately, this has been problematic with Sagittarius A, as the black hole is currently dormant; meaning, it isn't actively consuming material at the moment -- something that happens when objects fall into a stable orbit around a black hole. As long as they don't veer off course or have their orbits degrade, they can remain there indefinitely, or at least until enough material falls in to increase the size of the event horizon to the point that the object's orbit falls into the black hole's path.

However, several years ago, astronomers discovered that a rather large gas cloud looked like it was on a collision course with Sagittarius A. Such an event would give us the opportunity to study the environment surrounding Sag A, perhaps even helping to shed some light on the inner workings of this poorly understood central region of the Milky Way galaxy — an area plagued by large concentrations of fine interstellar dust grains, which effectively obscure the region from view at optical wavelengths.

As it turns out, scientists were correct. Using the ESO's "Very Large Telescope," astronomers were able to capture Sag A consuming the gas cloud in "real time." (As in, they were able to witness the cloud as it spiraled inward, instead of finding out about it after-the-fact. The event itself took place more than 26,000 years ago, with the light just reaching Earth when the video was snapped.)

The cloud made its closest approach at just over five Neptune-sun distances (about 15 billion miles/25 billion km). From this relatively close proximity, the gas cloud was stretched into a taffy-like tail by tidal forces, causing it to extend beyond 100 billion miles (160 billion km). The remainder of this so-called tidal tail wound up being sent spiraling away at speeds close to about 435 miles (700 km) per second (yes, per second).

Yes, I know it isn't the most high-resolution video you'll ever see, but it becomes instantly more astounding when you consider what we had to go through just to capture this video at all. It took some foresight, mathematical calculations and very sophisticated technology. With these things, we were able to capture footage of an object that can not be seen or heard and is contained within a region no larger than 100 AUs (1 AU is the distance separating the Earth and the Sun, so multiply that by 100 and you get a clear picture of how compact this black hole is, especially given its appreciable mass).

For more black hole inspired goodness, read about a new hypothesis suggesting black holes might actually be wormholes into other universes.