Want To Make Your Own Planet? With This Interactive Feature, You Can 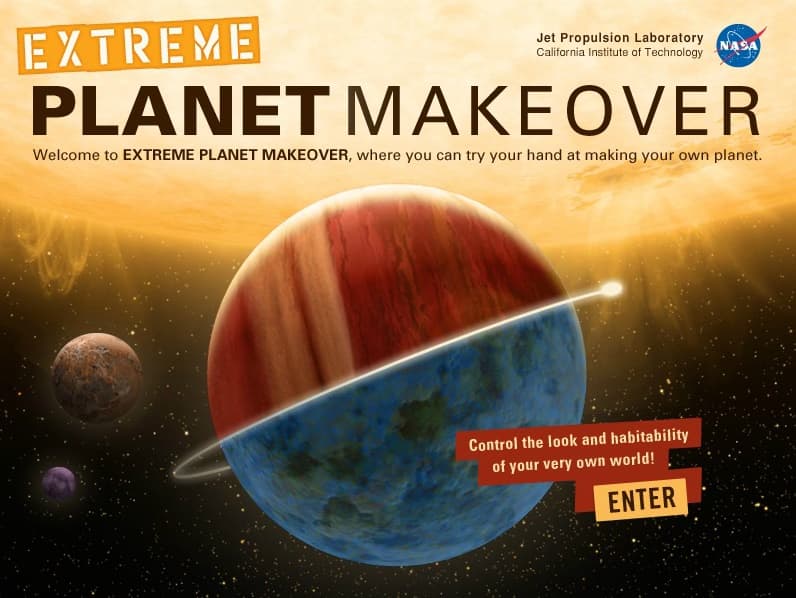 The prerequisites for a habitable planet are rather simple. Firstly, it has to be just the right size. It also needs to have a rocky surface, with a liquid core capable of generating a magnetic field and an atmosphere. It must be in the so-called Goldilocks zone: defined as the region in which a planet must lurk (in respect to its parent star, of course) for water to stably exist on the surface. It must also have a balmy temperature and a nearly-circular orbit (having an elliptical orbit is okay as long as it doesn't take the planet too close or too far away from its star, which would lock the planet into a repetitive cycle of freezing over and thawing out).

We merely know of one habitable planet, and it's the one we live on. Out there in deep space, we can look at a few key points (like the ones listed above) and arbitrarily decide whether a planet can indeed be considered conducive for life. Naturally, there are a lot of unknowns, and even changing one small detail can be catastrophic.

This is pretty much the essence of NASA's interactive feature, called "Extreme Planet Makeover."  It allows the user to create a planet, and see the ramifications each seemingly-minor change has. Click the image below to play.

Other Interactive Features To Explore:

Read This Next
Hall Effect
Test Suggests Ion Thrusters Could Power Crewed Interplanetary Missions
Shoo
Scientists Warn Giant Asteroid Is Actually Swarm, Nearly Impossible to Destroy
What Does It All Mean?
The Second Alien Probe We Detect May Be Particularly Bizarre, Scientist Says
A Sip of Opal
NASA Discovers Precious Gemstones on Mars
And He Scores
We Are Completely Puzzled by This Video of a Chinese Astronaut Playing Ping-Pong in Space
More on Off World
Light Me Up
6:09 PM on the byte
Wall of Lasers Cuts Across Hawaii's Night Sky
Water Sign
3:35 PM on the byte
Scientists Find New Evidence of Hidden Ocean World in Our Solar System
Trashing Orbit
Yesterday on the byte
Elon Musk Says SpaceX May Build Starship That Dies on Purpose
READ MORE STORIES ABOUT / Off World
Keep up.
Subscribe to our daily newsletter to keep in touch with the subjects shaping our future.
+Social+Newsletter
TopicsAbout UsContact Us
Copyright ©, Camden Media Inc All Rights Reserved. See our User Agreement, Privacy Policy and Data Use Policy. The material on this site may not be reproduced, distributed, transmitted, cached or otherwise used, except with prior written permission of Futurism. Articles may contain affiliate links which enable us to share in the revenue of any purchases made.
Fonts by Typekit and Monotype.