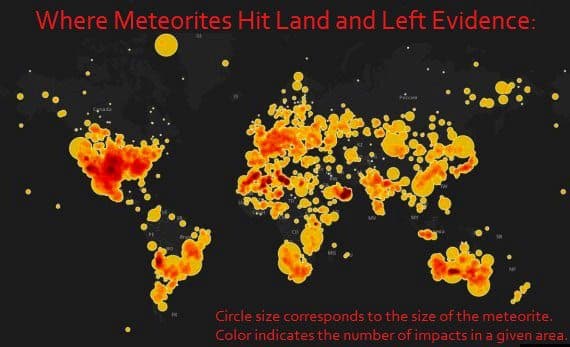 We all know that meteors and asteroids exist. We all know that there is a chance that, someday in the not-too-far-off-future, one might come careening towards our planet Armageddon-style. In fact, meteors come “careening towards our planet” on a regular basis. It's a bit hard to tell exactly how many meteorites hit Earth each year, as most of the objects that hit our planet are tiny—too tiny to see, let alone monitor. We can, however, pose some estimates, and presently astronomers estimate that, each year, between  37,000 and 78,000 tons of mass falls on Earth. Suffice to say, That’s a lot of material.

So perhaps the 55 foot (16 m) Russian meteor—scientifically known as the Chelyabinsk Meteor—that smashed through our atmosphere in early 2013 shouldn’t have been that much of a surprise. But it was. We’ve all seen the youtube videos. We’ve seen the images. And we’ve sifted through the plethora of articles that always seem to surface after such events (articles like the one you are reading right now). With all the frenzy and media-hysteria things like this incite, one can’t help thinking that, as a society, we remain oblivious for as long as possible. We only acknowledge something when 10,000 tons of it comes blazing through our atmosphere.

What am I really saying though?

This image shouldn’t shock anyone. But it will. It does. It shocked me the first time that I saw it. In this image, you see all the sites where meteorites hit land and left evidence since 2300 BCE. The size of the circle corresponds to the size of the object, and the color corresponds to the number of craters in a given location. The map, which was created by Javier de la Torre, shows over 34,500 recorded points of impact. The data used to create this image was collected from the Meteoritical Society, an international nonprofit collaboration whose aim is to, among other things, record all known meteorites.

Of course, this map shouldn’t be used as a guide to where impacts most commonly occur. First, it seems that the Midwest region of the United States is a target much more frequently than other areas. However, this section of the U.S has terrain and soil features that are conducive to monitoring and discovering impact sites. Additionally, the surface of the Earth is covered by 2/3 water, so most of the objects that make it through our atmosphere will leave no trace of their arrival.

And as a final point, the areas that are most heavily monitored by scientists and government agencies will have a more comprehensive catalog of impact sites (there are a lot of individuals and recording devices observing what takes place in populated areas; the same cannot be said of places that are largely uninhabited, like the poles). Consequently, more collisions will seem to strike in the more populated and highly monitored areas. Essentially, the map does not show location where impacts occurred, but were not discovered (this may seem pretty obvious, but there you have it).

What does this mean about the way that we should read this map?

We need to recognize that impacts are not necessarily a rare event (though large collisions do happen rather infrequently). We need to recognize that most of us (myself included) really don’t know all that much about meteorites, asteroids, and how they relate to the Earth. And, as intelligent and contentious individuals, when we recognize an oversight in our education—and this gap must be filled with knowledge.