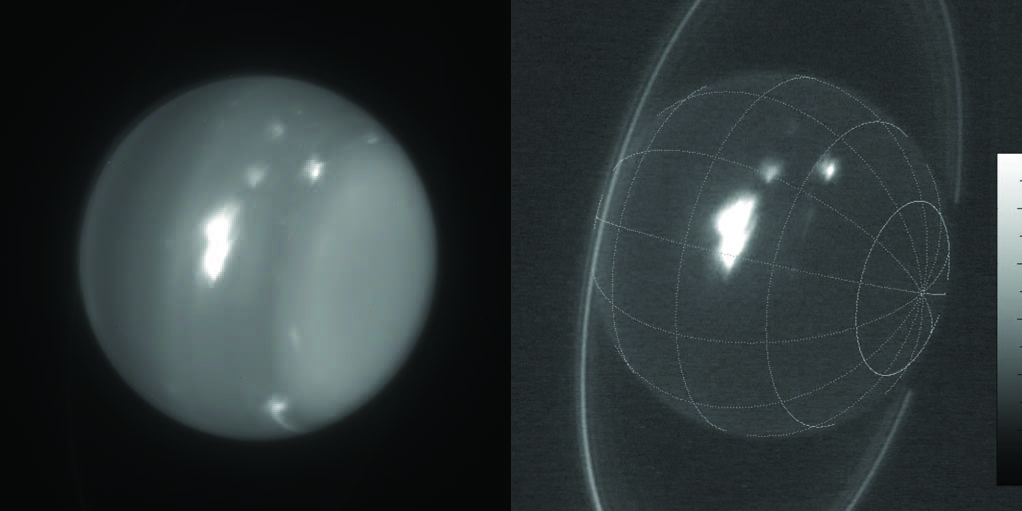 Using the Hawaii-based Keck Observatory and the space-based Hubble Telescope, astronomers from the University of California, Berkeley have learned that Uranus — the second-to-last planet in our solar system, which lurks 1.86 billion miles (3 billion kilometers) from Earth — appears to be undergoing inexplicable turbulent storm activity in its upper-atmosphere.

"The weather on Uranus is incredibly active," said Imke de Pater, professor and chair of astronomy at the University of California, Berkeley, and leader of the team that first spotted the activity. "This type of activity would have been expected in 2007, when Uranus's once every 42-year equinox occurred and the sun shined directly on the equator," noted co-investigator Heidi Hammel of the Association of Universities for Research in Astronomy. "But we predicted that such activity would have died down by now. Why we see these incredible storms now is beyond anybody's guess."

All of this started back in early August, when a team of researchers spotted an extraordinary number of storms brewing in Uranus' northern hemisphere. These weren't just any storms either. Over the course of two days, 8 storms cropped up. One of which, remains the brightest storm ever seen on Uranus. It was so bright, in fact, it accounted for well over 30 percent of all of the light reflected off Uranus.

Just a little over a month and a half later, Hubble focused its lens on Uranus once more and saw that multiple giant storms were still brewing, with some spanning more than 5,592 miles (9,000 kilometers) across. For some perspective, that is approximately 3/4th's of Earth's diameter.

Even amateur astronomers were able to resolve the storms using moderately-sophisticated telescopes. One French amateur —Marc Delcroix, an auto parts supplier based in Toulouse — managed to see the storms through his backyard telescope.

From the press release:

To further probe the mystery, an extended network of astronomers — led by Kunio M. Sayanagi, an Assistant Professor at Hampton University in Virginia — put the extensive number of amateur astronomers to good use, using them to put together a "Target of Opportunity" proposal for observational time on the Hubble Space Telescope. After their proposal was approved, Hubble was finally able to focus its attention on Uranus on October 14th.

Since then, they've been working on a detailed report laying out their findings, which is set to be made public on Nov. 12, during a meeting of the American Astronomical Society's Division of Planetary Sciences in Tucson, Arizona (USA).

Cosmetically, the storms are fascinating and they add another layer to Uranus' undeniable beauty, but the researchers are more interested in learning about the internal mechanism driving the storms, and why, above all else, they are happening now.

While neither of the ice-giants have been studied as extensively as Jupiter and Saturn, we do know a number of things about its inner-workings. For starters, we know that the planet gets its coloring from methane; that it, like our other gas giants, has multiple bands of circulating clouds, which give rise to massive, swirling storms, which sometimes match Earth in size. It's believed that the super bright cloud formations are an artifact of methane gas circulating through the upper atmosphere, "condensing into highly reflective clouds of methane ice."

Strangely though, since methane has no internal source of heat, we've had to rethink certain aspects of its atmospheric activity. The working theory suggests that said activity is driven by something as simple as sunlight. However, working under this assumption, it's clear we are missing something, as during the time at which these storms manifested, its northern hemisphere saw very little sunlight.

Anyone wishing to catch a glimpse of Uranus (sans storms, sadly), NatGeo notes, "The faint blue-green disk will appear only 3 degrees to the lower right of the faint naked-eye star Delta Pisces, which shines at 3.5 magnitude. Their apparent separation will be equal to six full moons, making them both fit easily within the field of view of a standard pair of binoculars."

You can see the full press release here.