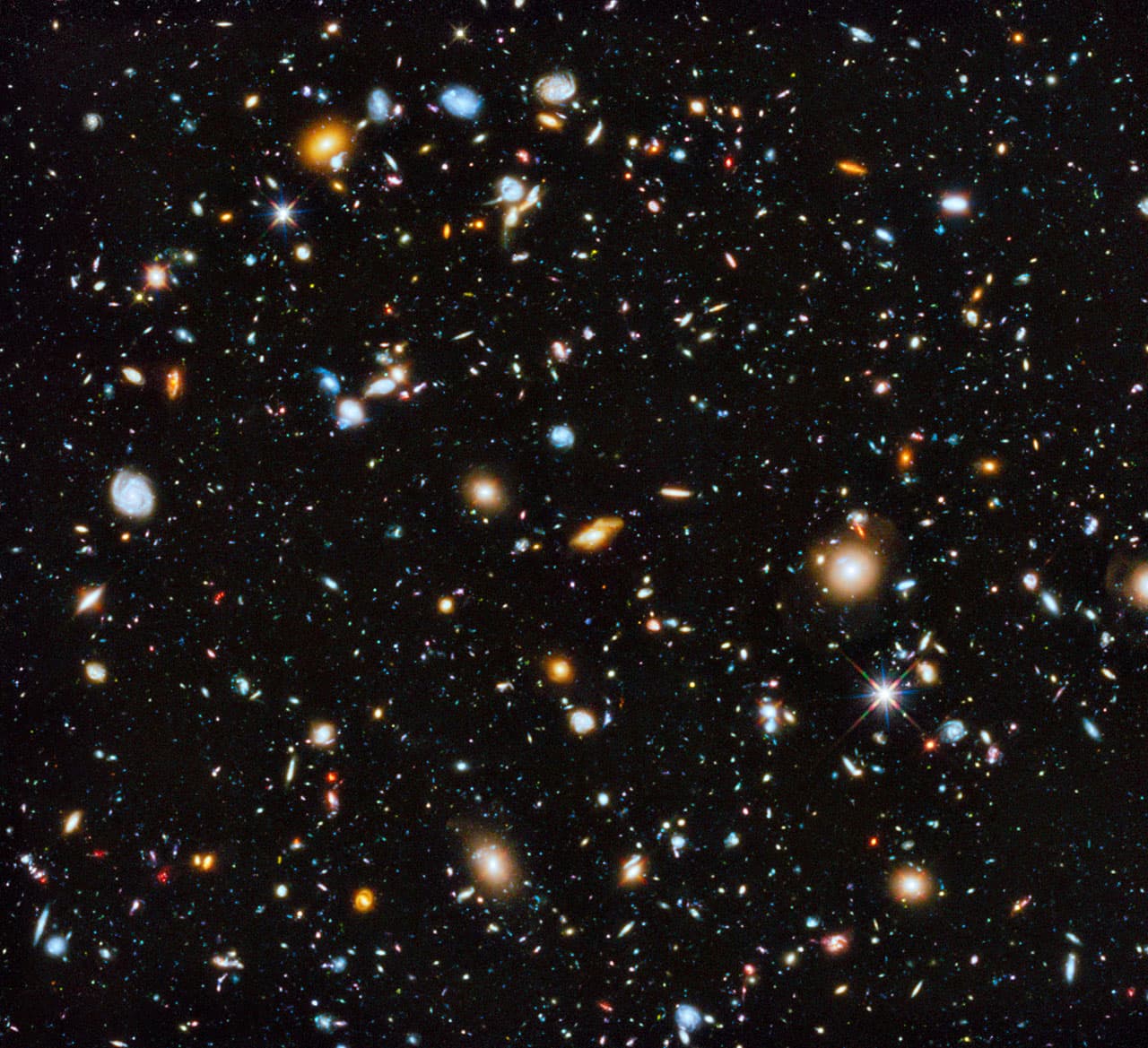 The Hubble Ultra Deep Field is one of, if not the most, famous picture the Hubble Space Telescope has taken. Objects in this image are up to 13-bililon light-years from Earth and it reveals a comprehensive timeline for the universe. Between September 2003 and January 2004, Hubble looked at a seemingly empty patch of sky, inside the constellation Fornax, only a tenth of the size of the full moon. It came back with a stunning picture containing over 10,000 galaxies (and pretty much all of them are galaxies containing thousands, millions, or billions of stars). This means that the image reveals trillions upon trillions of stars. Moreover, some of the galaxies are mature, but others are brand-new – being only 600 million years old.

Frequently, this image is posted and will have the caption "Every spec of light in this picture is a whole galaxy," or "There are lots of galaxies here," or "That's cool" (but with more caps-lock). What are you really looking at? The first step to understanding the sheer magnitude of how awesome this image is to, well, understand what you can actually see.

Firstly, in the foreground of the image you’ll see some large bright balls of light with a cross-like appearance. These are stars within the Milky Way. The cross is caused by the reflection of light off struts within Hubble.As far as galaxies go, if you look around the image you’ll see some larger, well defined galaxies – or 'modern' galaxies. These are less than 5-billion light-years from Earth. One such galaxy is located near the bottom left corner of the image and appears yellowish.Further away, we have galaxies between 5 and 10 billion light-years away. They have a galaxy look to them, but they aren’t as defined as the older, more modern galaxies. One such example is a collection of galaxies located above the right center edge and over about a sixth. Since the early universe was a turbulent time, it isn’t uncommon to see galaxies merging, an example is a trio of interacting galaxies in the same area I just described to you (appearing purpleish, and red-orangeish depending on the galaxy).Finally, at the edge of this image, you’ll see tiny red blobs of the universes youngest galaxies. They are peppered throughout the image. A good example of one is a oblong galaxy – if you found the pair of interacting galaxies from the above paragraph, travel in a straight line down from them, just past the center line of the image you’ll hit the a little red line. That is one of the first galaxies that formed in the universe and will later serve as a core for a more mature galaxy similar to the ones we see today.

So, look around the image (especially if you can find a nice big high resolution one you can zoom around with). This image shows a timeline of the formation of galaxies from some of their earliest moments of the universe, it also reveals some of the largest modern monsters that we have today. Ultimately, this pohot also helps us to see and understand the incredible vastness of our universe.

It is a rather stunning picture.