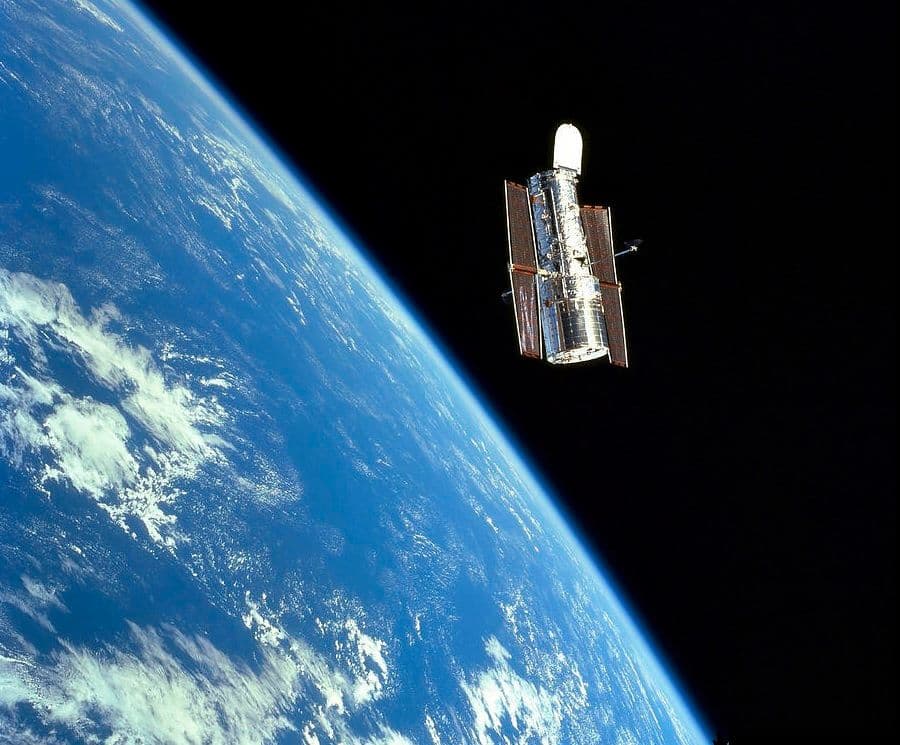 Since it went into orbit, piggybacking on the Discovery Space shuttle in the spring of 1990, the Hubble Space Telescope has revolutionized everything we know about our wonderful universe. Hubble has taken millions of photos of stars in various stages of development, made precise estimates about the age of the universe, and it has presented us with a myriad amount of information on cosmological events that were previously just beyond our understanding. Despite all of its accomplishments, Hubble had to overcome various challenges before, during, and after its launch. Here's the brief history of the Hubble Space telescope; the most glorious telescope in history.

Before the next section: let’s look at the logistics of how Hubble operates. Like any average telescope, in order to see anything, you must have a long tube that's open at one end to let in light. In this sense, Hubble is technically a "Cassegrain Reflector Telescope." It operates by light entering the device through a small opening, which then bounces the light off a primary mirror, which is 7.9 feet (2.4 meters) in diameter to a secondary mirror that is 1.0 feet (0.3 meters) in diameter.

The secondary mirror will deflect the light through a hole and into a focal point behind the original primary mirror. The mirrors installed in the telescope have to gather the light and bring it into focus to an area where the eye can perceive it. Since human eyes cannot see in x-ray, ultraviolet light, or infrared, Hubble had to be equipped with the proper tools to be able to observe these other forms of "invisible" light. To see these forms of "invisible" light, the mirrors aboard Hubble were coated with a layer of pure aluminum (three-millionths of an inch thick) and a layer of magnesium fluoride (one millionth of an inch thick) that are half-reflective and half transparent. Each instrument that detects the various forms of light uses a charge-coupled device that captures the light and turns it into a digital signal that is relayed to Earth.

Here are the "main" instruments on board the telescope (past and present):

This is Hubble's "main eye" that can see visible and ultraviolet light. The light collected can be ran through various filters to make natural and false color images.

This tool separates incoming colors of light in the visible spectrum and it can give us information about that object based on the light it emits. It can reveal the chemical composition of an object, the temperature, density, and motion. If the object is in motion, we can determined if it's moving towards us or away from us based on its chemical fingerprint. (Red Shift means the object is moving away from us and blue shift means the object is moving toward us. This tool was most recently used to determine whether the Andromeda galaxy was indeed on a crash collision course with The Milky Way)

The Advanced Camera for Surveys (ACS)

This tool uses visible light to help observe some of the universe's most distant objects, map the distribution of the ever elusive dark matter as well as aid in the search for exoplanets. This tool was only in use for 5 years before an electrical shortage disabled two of its three cameras in 07.

The Near Infrared Camera and Multi-object Spectrometer (NICMOS).

This tool gives Hubble the ability to peak through interstellar dust and gas clouds that are obstructing our view of the cosmos. This particular instrument can see infrared light (heat) from celestial objects.

These three sensors on the Hubble Space Telescope are responsible for pointing the telescope in the precise location that's being studied. They can measure the position and diameters of stars as well as helping detect planets by making astrometric measurements of a stars wobble, which is a tell-tale sign of an orbiting planet.

After a series of setbacks, most famously the "Challenger" incident, the $1.5 billion dollar project; the Hubble Space Telescope (which got its name from Edwin Hubble, an accomplished astronomer) was finally deployed into space on April 24th of 1990. Almost immediately, Hubble experienced some issues with the telescope's focus. The images we were receiving on Earth from the telescope were fuzzy and disproportional.

We realized that the primary mirror had been ground to the wrong dimension. Even though the defect in the mirror was miniscule by human standards (roughly equal to one-fiftieth the thickness of a strand of hair), the minor mistake had an unmistakable effect on the quality of the images that were being transmitted to Earth. Actually fixing the problem wound up being one of the most challenging missions in NASA history.

After 11 months, seven astronauts aboard the Endeavour space shuttle were sent to replace the dysfunctional piece with a "contact" piece called "COSTAR" (Corrective Optics Space Telescope Axial Replacement), which consisted of several small mirrors that intercepted the beam from the defective mirror and relayed the correct beam to the instruments at the focus of the mirror.

In February of 97, the Near Infrared Camera and Multi-Object Spectrometer and the Space Telescope Imaging Spectrograph where installed before a servicing mission crew in 99 replaced all six of Hubble's gyroscopes.

After a few more years of upgrades and new installations, Hubble's future was called into question when the seven astronauts aboard the Columbia space shuttle died as the shuttle they were on disintegrated upon re-entry in Earth's atmosphere. After the incident, NASA Administrator Sean O'Keefe made the decision that servicing the telescope was a chance they were no longer willing to take.

Currently, The Hubble Space Telescope is slated to be retired by the end of the decade as its successor, the James Webb Telescope, is launched into space. There are no more servicing missions planned in the near future.

To view images that were taken by Hubble, visit Hubblesite and prepare to eliminate your social life.