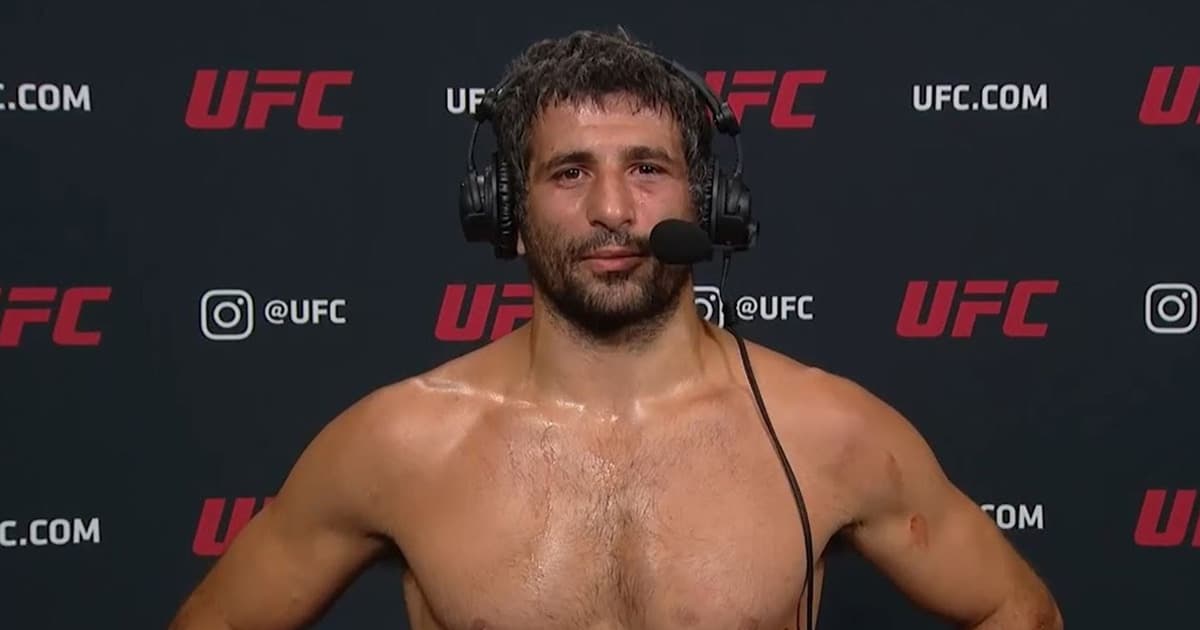 In the hierarchy of people you really do not want to piss off in this world, somewhere near the top between "person in charge of CIA renditions," "IRS auditor," "mother-in-law," and "class-action lawyer" is "bloodthirsty, freshly-minted UFC prizefighter champion." Which is exactly who Elon Musk was just called out by, on national televison.

On Saturday night, three-timer world Brazilian jujitsu champion Beneil Dariush added a seventh consecutive win to his UFC record in his fight against veteran fighter Tony Ferguson by unanimous decision. For those of you who don’t speak UFC, that means that he lasted fifteen minutes in a caged ring as he and another shirtless sweaty guy pummeled the hell out of one another, and then the judges all decided that he definitely beat the other guy to a pulp more than he got beat to a pulp himself.

Then, in his post-fight interview — fresh off of doing grievous injury to another man’s body with his arms and legs — instead of taking the opportunity to promote his own standing in the UFC, he said this:

“I wanna call somebody out. Joe [Rogan], I wanna call out your buddy: ELON! ELON MUSK! WHERE’S MY WIFE’S CAR, BRO? I’ve been waiting six months! I’ve had a baby! I need a good car! I gotta protect my daughter! LET’S GO ELON! I NEED MY CAR!”

Beneil called out no other than @elonmusk in his post fight interview, saying he's been waiting for his Tesla delivery for 6 months, and he needs a good car for his family! pic.twitter.com/fI6Sj7wS9C

Rogan, for his part, immediately deferred to talking about the fight. Maybe because Rogan knows better than to get between a billionaire and a UFC fighter with freshly splattered someone else’s blood on their face. As for Elon? He responded in the way one should probably respond to a guy who speaks in ALL CAPS after winning a human deathmatch:

"Coming soon! Sorry for the delay!"

And now you know how to get a response from Tesla: Beat a man within an inch of his life on national TV, and then personally call out Elon Musk.

In the meantime, these people, who — it should be noted — are not bloodthirsty UFC fighters have... yet to hear from Elon:

@elonmusk please explain to my wife how her @Tesla Oct 2020 #ModelX order still hasn't arrived? We were so excited and now so disappointed. Unacceptable.

@elonmusk Tesla’s customer service is appalling here in Norway! My friend ordered a brand new model 3 back in December and still hasn’t arrived. Was supposed to pick up the car today but turns out it isn’t even ready plus was previously owned twice in December! What’s going on??

Because my Tesla home charger hasn’t arrived yet. It’s behind. Once installed I won’t worry about it all that much. But, others might while traveling.

Credit where it’s due: Musk knows nothing if not where his (mortal coil’s) bread is buttered.

Read This Next
Where's Musko
7 Theories About Why Elon Musk Has Disappeared
tesla recall
Tesla Accused of Shutting Off Autopilot Moments Before Impact
Fiery Furnaces
Firefighters Struggle as Junkyard Tesla Bursts Into Flames Weeks After Crash
New Low Score
Tesla Reportedly Giving Full Self-Driving Beta to Basically Anybody Now
Stonk Broke
Twitter Bots Love Tesla. Elon Musk Is Pledging to Destroy Them
More on Advanced Transport
Wrong Turn
Jul 2 on the byte
Terrifying Video Shows Self-Driving Tesla Head Into Oncoming Traffic
Robotaxi to Nowhere
Jul 1 on the byte
Group of Robotaxis All Shut Down at Same Moment, Stopping Traffic for Hours
Here for the ride
Jun 29 on the byte
GM's Robotaxis Are Now Collecting Fares with No Safety Driver
READ MORE STORIES ABOUT / Advanced Transport
Keep up.
Subscribe to our daily newsletter to keep in touch with the subjects shaping our future.
+Social+Newsletter
TopicsAbout UsContact Us
Copyright ©, Camden Media Inc All Rights Reserved. See our User Agreement, Privacy Policy and Data Use Policy. The material on this site may not be reproduced, distributed, transmitted, cached or otherwise used, except with prior written permission of Futurism. Fonts by Typekit and Monotype.