And that's just one of several strange things about the duo. 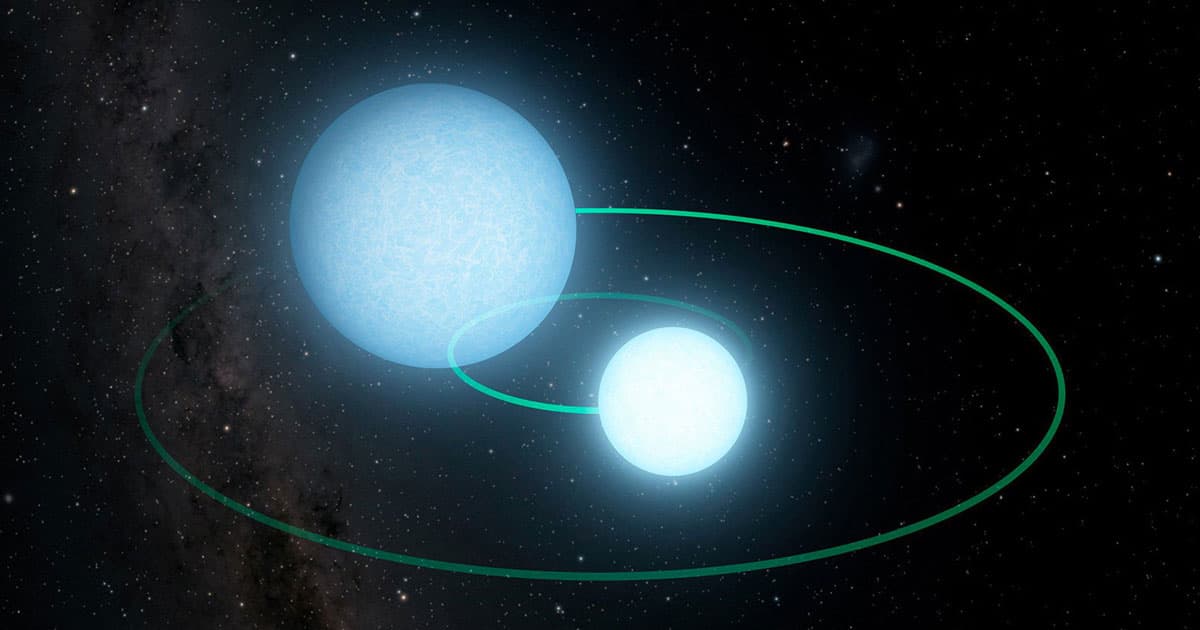 Those efforts have led to the detection of hundreds of asteroids, comets, and supernovae. But the survey may have just made its strangest discovery yet: a binary white dwarf system called ZTF J1539+5027.

White dwarfs are stars that start out like our Sun. Eventually, though, they swell into Red Giants, shed their outer layers, and end up as white dwarfs, which are essentially just the dead corpses of a star.

Each of the white dwarfs in ZTF J1539+5027, for instance, is about the size of Earth, and their combined weight is close to that of our Sun.

In a paper published in the journal Nature on Thursday, the CalTech team behind the discovery details just what makes this particular white dwarf duo so strange.

First, there's the fact that the white dwarfs are whipping around one another at an incredible speed — completing each rotation in less than seven minutes.

That makes the duo the second-fastest pair of orbiting white dwarfs ever detected, as well as the fastest "eclipsing binary system," a term used to describe a system where one star takes a path that crosses between Earth and the other star.

They're able to make these quick orbits because they're incredibly close to one another — according to a CalTech press release, their orbiting paths could fit inside Saturn — and moving at a blitzing pace of hundreds of kilometers per second.

Also weird: the dead stars' temperatures. The smaller but denser star is much hotter than expected, while the larger but less-dense star is cooler.

This strange temperature disparity could be explained by the smaller star feeding off its companion, but typically that would produce X-ray evidence and the researchers didn't see any.

If that wasn't enough to raise some astronomers' eyebrows, ZTF J1539+5027 is also one of the only known sources of gravitational waves, the ripples in space and time first predicted by Albert Einstein in 1916.

That final bit of strangeness makes the white dwarf duo an ideal target of study once Europe launches its Laser Interferometer Space Antenna (LISA) in 2035.

"Within a week of LISA turning on, it should pick up the gravitational waves from this system," researcher Tom Prince said in the press release.

That should give astronomers a jump start on using LISA to better understand the nature of gravitational waves — which could potentially yield new insights into everything from black holes to the birth of our universe.

READ MORE: Dead Stars Found Whipping Around Each Other in Minutes [CalTech]

More on white dwarfs: These Are the Planets That Survive the Deaths of Their Stars

Read This Next
Warped Tour
Professor Believes Door to Warp Drive May Lie With Ethylene Glycol
Ripple Burst
Scientists Detect "Tsunami" of Gravitational Waves
Yeet!
This Star Appears to Have Survived a Supernova
Not a Neutron Star, Not Yet a Black Hole
Astronomers May Have Discovered First-Ever "Black Neutron Star"
Black Hole Fun
Physicists Finally Find a Way to Tell Certain Black Holes Apart
More on Hard Science
Sky Bursts
Thursday on the byte
Astronomers Intrigued by 25 Mysterious Repeating Radio Signals From Deep Space
Tractor Beam
Jan 26 on the byte
Scientists Build Working Tractor Beam, Although It's Comically Tiny
Having a Blast
Jan 18 on the byte
New Study Shows Where You Should Hide to Survive a Nuclear Attack
READ MORE STORIES ABOUT / Hard Science
Keep up.
Subscribe to our daily newsletter to keep in touch with the subjects shaping our future.
+Social+Newsletter
TopicsAbout UsContact Us
Copyright ©, Camden Media Inc All Rights Reserved. See our User Agreement, Privacy Policy and Data Use Policy. The material on this site may not be reproduced, distributed, transmitted, cached or otherwise used, except with prior written permission of Futurism. Articles may contain affiliate links which enable us to share in the revenue of any purchases made.
Fonts by Typekit and Monotype.