Two Questions That Changed The World 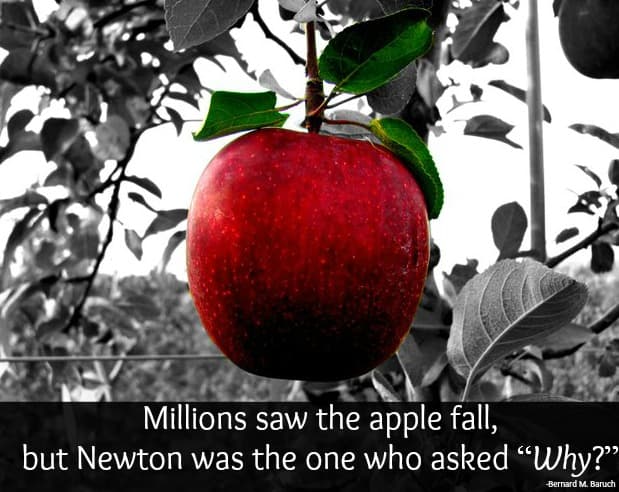 They say that need is the mother of invention. If this is true, then curiosity is the mother of scientific discovery. We would not have achieved all the scientific advancements that we have achieved if not for minds that look into the universe with utmost curiosity and wonder. Some may think that education stops when one graduates from school, but I say that it only stops when we stop entertaining our curiosity and stop asking questions.

Many people are familiar with the works of Isaac Newton and Albert Einstein - widely considered to be two of the most important physicists of all-time. What many of us do not know, or perhaps notice, is the similarity in how they began their work: With just a question.

It is said that, as the young Isaac Newton was walking in an orchard, he noticed an apple fall. When he saw this, he asked himself: "If the apple falls, does the moon also fall?" This question put Newton on the road to all his future accomplishments. He went on to describe the force of gravity and then concluded that all the planets and stars moved as they did because of this force, earning him the name "the father of gravity".

From his law of universal gravitation, Newton discovered the planet Uranus by observing its disturbance of Neptune's orbit. This was followed by many more breakthroughs, most notably in mechanics. This work in turn helped give birth to the industrial revolution, as it laid the foundations on which steam engines and many other machines worked. Newton's laws are so useful and accurate that they are the only equations that are needed to land a spacecraft on the moon, or indeed any planetary body. Although we now know that Newton's laws are not completely infallible when it comes to special circumstances such as quantum mechanics, their simplicity has ensured their continued inclusion in every modern-day physics textbook.

Albert Einstein also started by asking just one simple question: "What would happen if I rode a beam of light?" This then prepared the stage for his theories of special and general relativity. These theories completely changed the way we view space and time and have been confirmed by every experiment ever conducted thus far. The predictions of both theories are at times bizarre, but this has brought us a little bit closer to understanding things that we see only in sci-fi movies, like time travel and wormholes. The importance of general relativity is also evidenced by the huge amount of work being conducted to try and unify it with quantum mechanics to create a 'grand theory of everything'.

In summary, to quote Phillip C. Plait: "If a kid asks you why the sky is blue, you look him or her right in the eye and say: 'it is because of quantum effects involving Rayleigh scattering combined with a lack of violet photon receptors in our eyes.'" Ultimately, this highlights the importance of encouraging individuals to discover the real workings of the cosmos. True, you can create a sense of wonder by telling fantastical stories about rainbows, the sky, and the creation of our universe; however, it is far better to speak of the awesome forces that actually govern our universe and teach people what they can do when armed with this knowledge: They can become great teachers or inventors; they can become astronauts or marine biologists; they can cure diseases, or discover new species, or open up the inner workings of the cosmos.

There are so many amazing things in our universe, there is little reason to tell tall tales. We have black holes, and neutron stars, and supermassive suns that make our own star look like a peanut. This is just the start of the wonders of the cosmos, and there are still a plethora of questions that we need to answer about each of these structures. Ultimately, we need to have a continual curiosity; we need the next generation to be a generation of explorers and inventors and wonderers. Without this, we would not be armed with the work of Newton and Einstein. Without it, our quest to unravel the secrets of the universe would come to an end.