Behemoths of the Universe: Hypergiant Stars 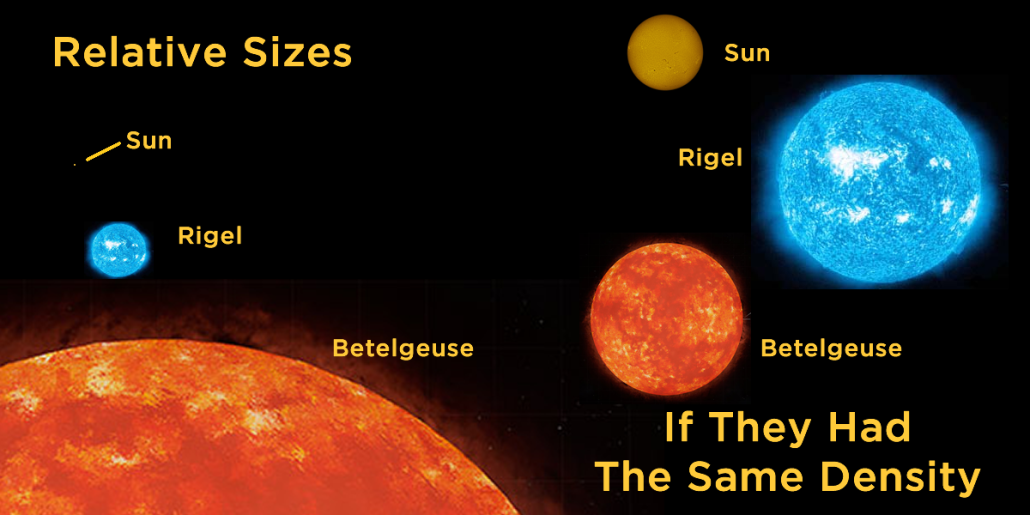 The universe is populated with a number of amazingly massive stars, many of which dwarf our own Sun. One of the most well known is VY Canis Majoris, which is one of the most sizable stars in the known universe (and was the largest known star for quite some time).

Lurking in the cosmos some 3,900 light-years from earth (about 22.8 quadrillion miles from our home), VY Canis Majoris is a mammoth. If this star were in the center of our solar system, it would extend far beyond the orbit of Saturn (so let’s be glad that it’s a few quadrillion miles away).

To give you some hard figures, the circumference of our Sun is approximately 2.7 million miles (4.3 million km), while Canis Majoris is approximately 1.9 billion miles (3 billion km). Yes, that is billion. For a bit of a comparison, when circling around the Sun, light clocks in at about 14.58 seconds. However, it takes almost 8 hours for photons to travel around Canis Majoris.

Plan on circumnavigating this beast yourself? Maybe think again. Of course, it would take generations to reach this star. Using the speed of one of our fastest probes, NASA's New Horizons craft, it would take us well over 50 million years to get there.

But even if you were magically transported to Canis Majoris, a passenger airplane traveling along the surface at an average cruising speed of 559 mph (900km/h) would take over 1,100 years to complete one circuit. Which means that, if you started your trip around this star on the day that the Holy Roman Empire was founded (about 962 CE), you would have just recently finished your journey circumnavigating Canis Majoris.

Yet, similar trip around our own Sun would only take you 7 months (but in both cases, you likely wouldn't finish your journey...you'd probably die from eating the horrid airplane food much earlier).

Still not impressed? The amount of energy our Sun emits in a year is equal to what this hypergiant releases in the matter of seconds. But Canis Majoris isn’t the only title weight champ in our galactic neighborhood…although it might be one of the largest, it isn’t the heaviest.

Previously, the Pistol Star was the heaviest known stellar object. Measuring in at nearly 150 solar masses, and spanning some 4 light-years, the largest shell of expelled gas from the Pistol star is so big that it could stretch from our Sun to the tips of the next nearest star (Proxima Centauri, which is some 4.2 light-years away).

But with a mass that was once 320 times greater than the Sun's, R136a1 makes the Pistol look like a tiny speck.

Discovered early in July of 2010, R136a1 is one of the most massive known stars in our corner of the universe; it also has an extreme luminosity. Currently, the star measures nearly 265 solar masses. But when it was born , the star weighed as much as 320 times as much as the Sun.

So why the sudden change?

Heavy stars rapidly lose mass by converting it into energy. R136a1 has already lost 20% of its mass during its short life. And this star has had a very short life. Scientists estimate that it is only 1 to 2 million years old. The Sun, by comparison, has been burning for some 4.57 billion years, and it has only converted about 0.03 percent of its mass into energy during all of this time.

In cosmic terms, R136a1 is still a baby. But, sadly, its life is already drawing to a close. Scientists estimate that stars of this size live only 3 to 4 million years. For humans, such a life would be legendary beyond measure…but for stellar hypergiants like R136a1, it’s barely a blip. Our Sun, on the other hand, is expected to live for at least another 5 billion years.

Sometimes, being the little guy is a very good thing.