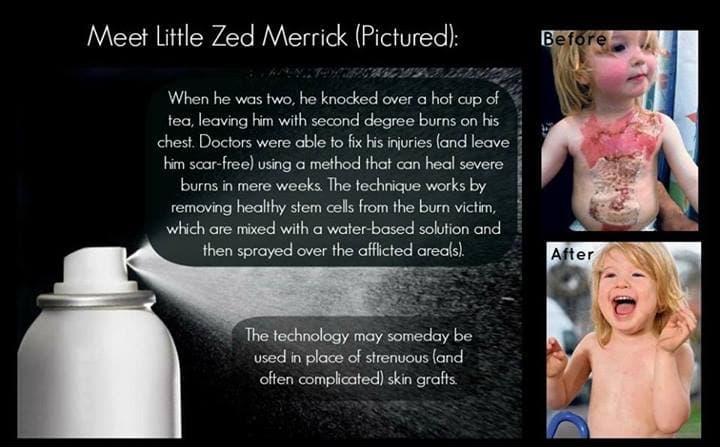 At the turn of each century, the methods in which scientists previously employed to treat devastating injuries seemed more and more archaic. Indeed, we've come a long way from using cow dung, beeswax and resin-soaked tree shrubs—paired with pretty incantations and crossed fingers—to heal badly burned skin. Today's methods are immeasurable, but perhaps not ideal, improvements, but now, stem cell research has put effective treatment methods on an uprise, with skin grafting venturing into 'archaic' territory

Traditionally, skin grafts are used when one suffers severe second or third degree burns. Doctors surgically remove healthy sections of a person's own skin and tissue, which are subsequently reconstructed into mesh-like units, before being reintegrated into the body in place of the damaged skin. This process can be long, fraught and extremely painful (and when something is long and drawn out, you can bet the medical bills will be outrageous too). Further complicating the process is the looming possibility that the body will reject the tissue taken from the donor site, or that the wound will become infected (this, in turn, can lead to septic shock and even death on occasion). Both scenarios are clearly bad news for the patient and even in the best medical institutions, catastrophic complications often arise. So there is a great need for more refined methods, especially for those living in second or third world countries.

So, what is this mysterious thing that would not only be 100% more effective than skin grafts, but would also drastically reduce the average recovery time for people afflicted with severe burns (and even some types of wounds)? It isn't new, per se (it has been in development for at least 5 years, building on several previous models), but it does highlight yet another benefit of stem cell research.

In order to bypass some of the downsides of skin grafting, scientists from all over the world have been looking for an alternative method for burn patients. In doing so both The Skin Gun and Re-Cell,  as they are cleverly called, were created. The technology requires a doctor to remove healthy stem cells from an undamaged area on the victim's body through a biopsy. After the stem cells are isolated, they are used in conjunction with a water-based solution, which is then sprayed (similar in mechanics to a can of aerosol spray-paint) on top of the burn site.

Almost immediately afterward (the process generally only takes about an hour), the wound is wrapped with a special dressing ,with a set of tubes that send antibiotics, electrolytes, glucose, and amino acids to the wound. (They are pretty much an artificial version of arteries and veins, which work similarly with functions in the body)

Within days, the stem cell concoction successfully encourages cellular regeneration within the inflicted burn area, allowing the wound to heal in only a mere fraction of the time (they also essentially eliminate most of the risks involved with traditional skin grafts). Whereas, currently, skin grafts can take several months to a year before completion. Even then, cosmetically speaking, the healed skin is still quite jarring.

With this method, any lasting scars would be faint, if not invisible. Take Zed Merrick for example, a few years back, he accidentally knocked over a steaming pot of tea on his chest, leaving him with some pretty gnarly wounds that would certainly leave lasting scars with a skin graft, but he was given the opportunity to test out such techniques. As you can see in the before/after picture below,  not only were they successful, but the burn marks  themselves are hardly even noticeable.

At the moment, the technique can only be used on second degree burns (and it is still quite expensive), but in the future, its potential usages could be increased tenfold; Perhaps even being used for reconstruction of the breasts after a life-saving mastectomy, or eventually used to break apart internal scar tissue (and by proxy, preventing unsightly scars). As another bonus, despite his age, he will not need further treatments, as this portion of skin will adjust alongside Zed, stretching to accommodate his growing size. With grafting, many follow-ups surgeries are required.