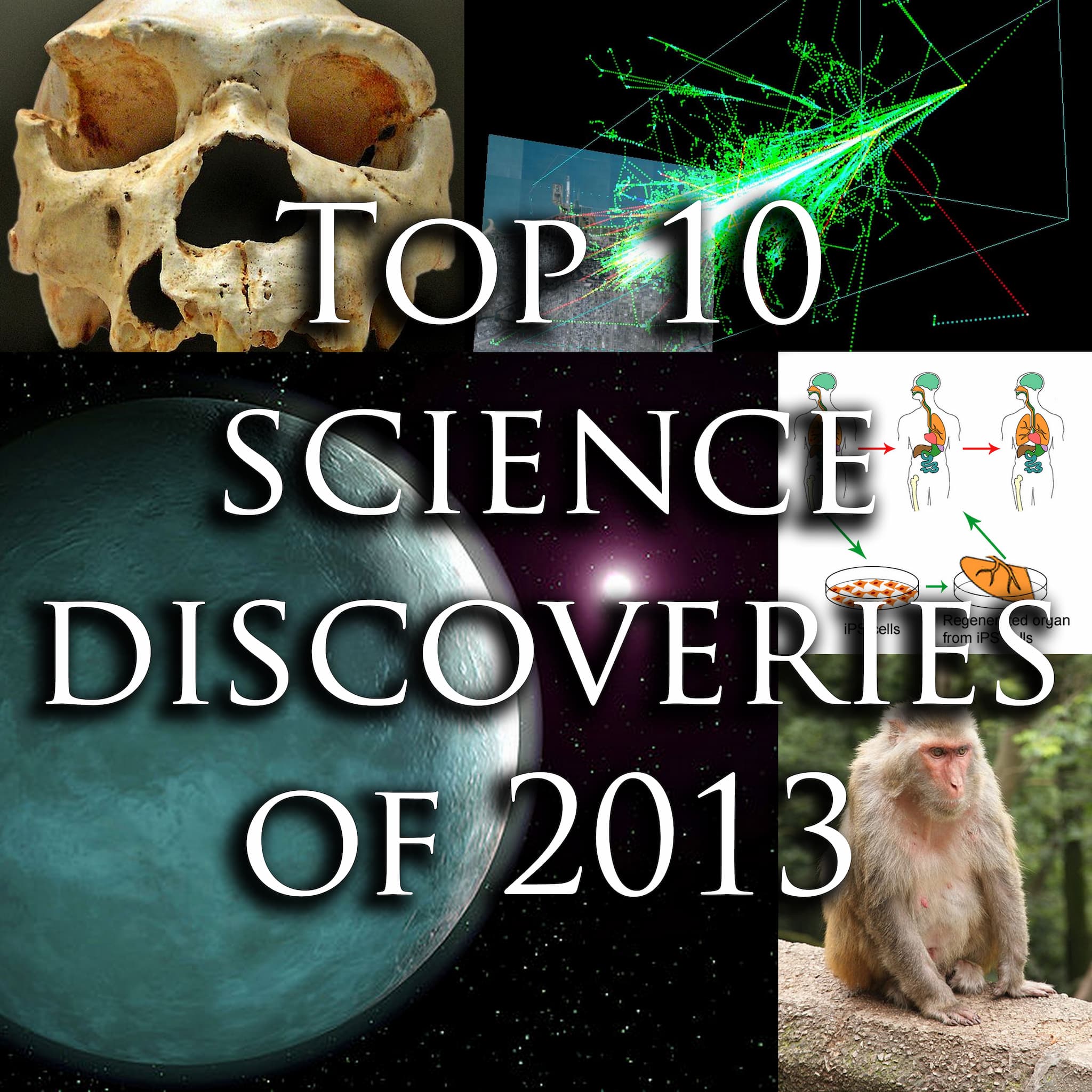 It's been a big year for science.  Below is a (very incomplete) list scientific discoveries that hit the news in 2013.  These are the top stories in the eyes of From Quarks to Quasars.  Undoubtedly though, there are many other worthy discoveries that should also be on this list.  We welcome you to comment what you think the top discoveries should be. Perhaps your comments will act as a supplemental list for readers. With that in mind, be sure to include links to your favorites.

Using induced pluripotent stem cells, researchers created liver buds that exhibited liver like metabolism. What's more, when they were implanted into mice, they attached to the mice’s circulatory system.

Why is this so amazing? After a normal organ transplant (the kind that we have bee doing for years), individuals need to take immunosuppressant (anti-rejection) drugs.

These drugs help prevent a person's immune system from attacking ( or rejecting) the new organ. In essence, a person's body will see the transplanted organ as a foreign body and attack the organ because it is a perceived invader. In order to prevent this from happening, people who receive transplants must take anti-rejection drugs for the rest of their lives.

However, this could be the first stage of successful human organ transplants that need no anti-rejection drugs (since the organ was built with the patient's own genes).

With an electric shock, a little caffeine, and many trials, scientists created the first cloned human embryo. The researchers removed the nucleus from an embryo and inserted a skin cell nucleus from a 8 month old baby.  In the future embryonic stem cells could be used to make replacement organs for any part of the body. In addition to this, scientists believe that human embryonic stem cells could be used  to treat all sorts of illnesses, including diabetes, Alzheimer's, Parkinson's, and even spinal cord injuries. This is because the cells can morph into any kind of cell in the body. Since their discovery, scientists have been trying to use cloning techniques to make embryonic stem cells (this is because these cells would be a genetic match for patients). With such a close match, the body would not likely reject the cells.

The long standing debate over where cosmic rays originate has now largely been settled. Cosmic rays are an assortment of sub-atomic particles that reach Earth travelling at great speeds (sometimes near the speed of light). These fast moving particles continuously bombard the Earth, and they are thought to primarily come from supernovae explosions.

The finding is supported by gamma ray signature signals from supernova remnants detected by NASA’s Fermi telescope. Moreover, the findings – based on geological and astronomical data – suggest that nearby supernovae have strongly influenced the development of life over the last 500 million years.

3 years after treatment, Rhesus monkeys are still SIV free (they are free of the Simian Immuno-deficiency Virus, a virus that is closely related to HIV). Researchers used another virus, cytomegalovirus, to infect CD8 hunter-killer white blood cells, and caused them to destroy monkey cells infected with SIV. A similar technique is hoped to soon be successful in humans.

In addition to this, a global HIV-1 mosaic vaccine has afforded partial protection against SHIV in monkeys. Ultimately, this protection is correlated with binding, neutralizing, and nonneutralizing antibodies. This data suggests that this may be used as a strategy toward the development of a global HIV-1 vaccine.

For the first time ever, a lab grown organ has shown function within a recipient host. The lab grown kidney produced urine and creatine (a product of properly functioning kidneys) successfully. First, researchers scrubbed a deceased rat’s kidney of cells leaving only the connective tissue scaffolding.  Next, they grew on that scaffolding human umbilical vein cells to line blood vessels and newborn rat kidney cells to form the organ tissue. These are the first steps towards growing organs for transplantation.

Earlier this year, physicists at The University of Texas at Austin built a tabletop particle accelerator. That's right, a tiny particle accelerator.  Ultimately, this device can generate energies and speeds previously reached only by major facilities (which are all hundreds of meters long and cost hundreds of millions of dollars). Reducing the size of a particle accelerator by 10,000 times, 2 gigaelectronvolt electrons have been accelerated in the space of 1 inch. The compact accelerator could be used to create high energy X-rays, allowing for the possibility of highly precise molecular imaging in real time. According to the researchers who developed this device, “We have accelerated about half a billion electrons to 2 gigaelectronvolts over a distance of about 1 inch. Until now that degree of energy and focus has required a conventional accelerator that stretches more than the length of two football fields. It’s a downsizing of a factor of approximately 10,000.”

Following analysis of data from the Large Hadron Collider, researchers are now confident that the Higgs boson has been detected. Earlier this year (in March), CERN announced with near certainty that the boson discovered through particle collisions at the Large Hadron collider in Geneva is indeed the long sought after Higgs Boson particle — the last missing piece of the Standard Model of Particle Physics.

The Higgs boson could help explain the means in particles in the universe obtain their mass. Since the Higgs boson quickly decays into other more stable particles, it’s far more difficult to observe than other subatomic particles created in particle accelerator collisions.

Mimicking the conditions similar to that of the big bang, when it’s created, it’s believe to exist only for a septillionth of a second, making the work of sorting through the data collected from trillions of collisions, a tedious process.

During sleep ,brain cells shrink allowing fluids to flush out the toxic by-products of normal brain function, such as beta-amyloid proteins. Fluid flushes out these Alzheimer’s causing proteins at twice the rate during the night as they do during wakefulness. "Staying up all night could prevent the brain from getting rid of these toxins as efficiently, and explain why sleep deprivation has such strong and immediate consequences. Too little sleep causes mental fog, crankiness, and increased risks of migraine and seizure. Rats deprived of all sleep die within weeks. Although as essential and universal to the animal kingdom as air and water, sleep is a riddle that has baffled scientists and philosophers for centuries."

New estimates based on NASA’s Kepler spacecraft data suggest that 1 out of 5 Sun-like stars in the Milky Way Galaxy has planets that are Earth sized and within the “Goldilocks zone” (the Goldilocks zone is the region near a star in which liquid water could theoretically exist). Of course, having  liquid water, a key ingredient of life as we know it, is very important to us as it could be the key to discovering familiar lifeforms or distant, habitable planets.

The mitochondrial genome of a 400,000 year old hominin from modern day Spain was sequenced for the first time. This is almost four times older than any other human DNA sequence. The sequence bears resemblance to both Denisovans and Neanderthals, but most closely to Denisovans (which are a hominin species from Siberia that was recently sequenced from a 40,000 year old bone).  This year the oldest sequenced genome ever came from a 700,000 year old horse from the Yukon Territory of Canada.