The footage of a web-like crowd is eerie to watch. 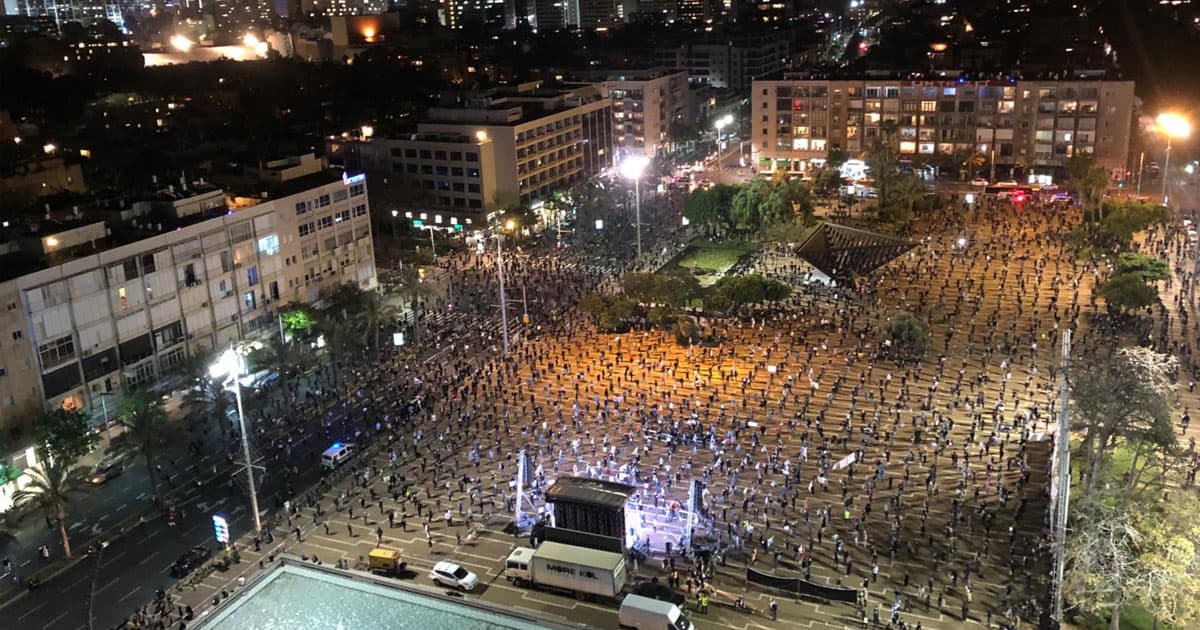 Aerial images and videos of the square show a strikingly consistent web of evenly spaced people.

It's a fascinating look at the realities of political protesting in the age of coronavirus. On one hand, dissent is important for democracy. But on the other, large crowds of people gathering in the streets can give the virus a great opportunity to spread.

"This is how democracies die in the 21st century," Yair Lapid, chairman of the country's centrist political party Yesh Atid, said in his speech as quoted by Haaretz, "They don't die because tanks overtake parliament, they die from the inside."

The protests are part of the "Black Flag" movement, which started last month when hundreds of cars drove to Jerusalem to protest anti-democratic coronavirus policies.

The protest was aimed at anti-democratic measures passed by prime minister Benjamin Netanyahu during the ongoing pandemic, which critics say are being used to consolidate power.

"A person with indictments can’t appoint a police chief, a state prosecutor, an attorney general, the judges who will deal with his case," Lapid said during his speech.

"What connects all the groups and causes is the shout out for Israeli democracy that is being harmed these days by Netanyahu and his allies," Shaqued Morag, executive director of the anti-occupation group Peace Now, told TIME.

Despite the protests, polls have shown that more than 50 percent of the population approved of his handling of the ongoing pandemic.

More on the pandemic: Experts: US Will Need 20 Million Tests per Day to Reopen Safely

Read This Next
Sexy Masks
Study: Face Masks Make People Look More Attractive
Stranded
Man Lost at Sea for 30 Days Says It Was a "Nice Break" From Pandemic
Throwing Memes
Chinese State News Agency Floods Social Media With Anti-America COVID Memes
R-E-S-P-E-C-T
Here's Why People Are Calling Elon Musk a "Space Karen"
Cozy Bears
State-Backed Russian Hackers Are Targeting Coronavirus Vaccine Research
More on Future Society
Down in Flames
Yesterday on the byte
Elon Musk Apparently Thinks Twitter Is a "Flaming Dumpster Rolling Down the Street"
All Tomorrow's Pa...
Yesterday on the byte
Party Startup Says It Has Zero Plans to Make Any Money With Investors' Funds
Primate Theft
Tuesday on the byte
It Was a Very Bad Weekend for Monkeys Being Stolen From Zoos, Apparently
READ MORE STORIES ABOUT / Future Society
Keep up.
Subscribe to our daily newsletter to keep in touch with the subjects shaping our future.
+Social+Newsletter
TopicsAbout UsContact Us
Copyright ©, Camden Media Inc All Rights Reserved. See our User Agreement, Privacy Policy and Data Use Policy. The material on this site may not be reproduced, distributed, transmitted, cached or otherwise used, except with prior written permission of Futurism. Articles may contain affiliate links which enable us to share in the revenue of any purchases made.
Fonts by Typekit and Monotype.