This Squid Sure Knows How to Get Groovy 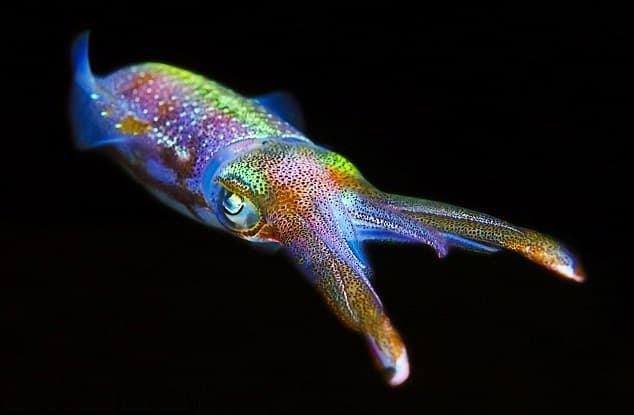 Humans, if we need light for one reason or another, we can flip a switch or light a match. However, in the animal kingdom, some creatures are lucky enough to not need the technological help; they can generate light themselves. Of course, there's usually a catch. In this case, the catch being that this internal mechanism is usually brought on by some kind of an existential threat. Other times, it merely happens because it helps aid a species in the hunt for food. Such is the case with a colorful, groovy creature, sometimes called the disco squid (but more commonly known as the Caribbean Reef Squid). Recently, oceanic wildlife photographer and Hawaii native Masa Ushioda captured incredible images of this Caribbean reef dwelling creature in its natural habitat at night.

Taken 50ft (15 meters) underwater near the City of Washington Wreck off Florida Keys in the US, this beautiful set of images show a 12-inch (30 cm) cephalopod as it sussed out its next meal. In her own words:  "I found this squid hunting for prey and it started targeting some zoo plankton off my dive lights. When they are hunting, they get excited and display the most brilliant colors using the special chromatophores in their skin. As soon as it had snatched a couple of plankton, it jetted away with excitement."

Rather than becoming bioluminescent in a traditional sense, these creatures, in a manner similar to comb jellies, use sacs of pigment-containing and light-reflecting organelles found within their cells (and controlled by their central nervous system) to generate their light at will, which not only helps them hide from predators, but it is also used as a means of communication. For instance, when in search of a mate, they start flashing their rainbow-colored strobe lights, but when in danger, they merely expand and contract their bodies, with their light making them seem larger and more threatening. It can also help them blend in with their surroundings by matching shapes and even textures (though we have to say that. they aren't nearly as efficient as a mimic octopus is).

Even more amazing is the fact that they can convey different messages at the same time. On one side of their body, they might be signaling something to one the squids traveling in their pack (they generally gather in great numbers prior to mating), while maintaining a different look with the rest of their body. During and right before mating itself, the male makes his intention clear by generating a "courting" pattern to the female and an oppositely aggressive pattern on its other side to scare away any potential competition. Only unfortunately enough, they don't live too long after they mate.

Finally, the colors they generate is yet another tool they use to communicate certain information. "To signal slight alarm, their brow ridges turn bright gold and the central arms turn white. The entire body will pale if the squid retreats from its potential predator and in open water when faced with an extremely aggressive predator, reef squid will obstruct themselves and confuse the predator by ejecting a cloud of black ink. Retreating squid near the protection of the reef will often turn dark brown or reddish in color to match their surroundings"