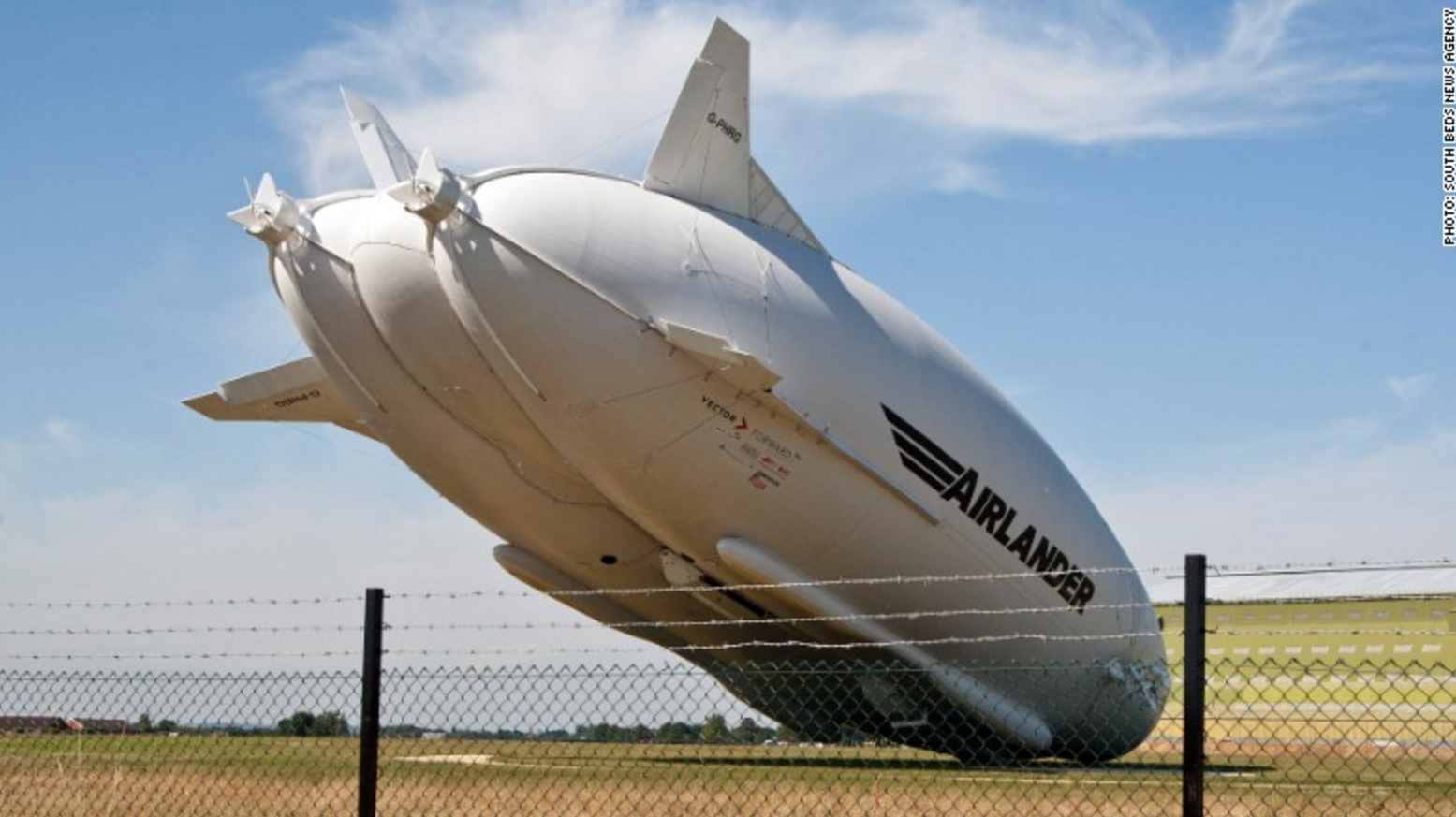 The world's largest aircraft is the Airlander 10. Notably, it can carry more load than airplanes— up to ten tonnes (11 tons)—and it does so while using less fuel. In fact, when it moves, it uses only a third of the fuel of regular planes. True, it does move pretty slowly. But down the road, it could help us enter into a new era of commercial transport. And to that end, it finally went airborne just last week.

Unfortunately, it seems that it has already had a bit of a mishap, as the images here reveal.

During its second voyage today, the 92-meter (302 ft) aircraft had a bit of a blunder on its return to Earth. It spent about an hour and half in the air (a little over 100 minutes) and was coming in for a landing when it suddenly did a nosedive. Although it did sustain some damage in the crash, Hybrid Air Vehicles, which is the company behind the aircraft, notes that the damage seems to be relatively minor.

Most of the problem seems to be focused on the cockpit; however, fortunately, there were no injuries. Reports assert that the crew is all "safe and well."

In a statement, the team characterizes the crash as a "heavy landing:"

The Airlander experienced a heavy landing and the front of the flight deck has sustained some damage which is currently being assessed....Hybrid Air Vehicles runs a robust set of procedures for flight test activities and investigation of issues. We will be running through these in the days ahead as we continue the development of the Airlander aircraft.

Unlike earlier zeppelins, the Airlander 10 uses non-flammable gas. This is notable because the Hindenburg, which crashed and killed 35 people in 1937, immediately comes to mind. Airlander 10 sustains its lift with helium, which is not flammable like the hydrogen that powered the Hindenburg.

You can see the event in the video below.

The test flight hopes to prepare the airship for commercial use. The company plans to build even bigger airships that could carry 50 metric tonnes (55 tons) by the 2020s. And to that end, such minor upsets like this shouldn't cause too much concern, as each new technology has its own set of bumps and bruises it must go through in order to work out all the kinks.

Further information will be disclosed as soon as it is made available.

Read This Next
Buzz Off
Drones Just Shut Down Another Huge Airport
Futurism
Watch This Autonomous Car Carefully, Safely Weave Through A Crowd of Pedestrians
Futurism
ElectroBike Releases an Incredibly Small, Super Light Smart E-Bike
Futurism
Amtrak's New High-Speed Trains Can Reach 300 Kph, and Should Arrive in 2021
Futurism
The New SleepBus "Teleports" Passengers from L.A. to San Francisco
More on Robots & Machines
From the Dept. of...
Yesterday on futurism
The Best Exercise Bikes of 2023
It's Nothing Pers...
Thursday on the byte
Scientists Create Shape-Shifting Robot That Can Melt Through Prison Bars
From the Dept. of...
Thursday on futurism
The Best Smart Lights of 2023
READ MORE STORIES ABOUT / Robots & Machines
Keep up.
Subscribe to our daily newsletter to keep in touch with the subjects shaping our future.
+Social+Newsletter
TopicsAbout UsContact Us
Copyright ©, Camden Media Inc All Rights Reserved. See our User Agreement, Privacy Policy and Data Use Policy. The material on this site may not be reproduced, distributed, transmitted, cached or otherwise used, except with prior written permission of Futurism. Articles may contain affiliate links which enable us to share in the revenue of any purchases made.
Fonts by Typekit and Monotype.