The (Possible) Successor to the LHC: Meet the Very Large Hadron Collider 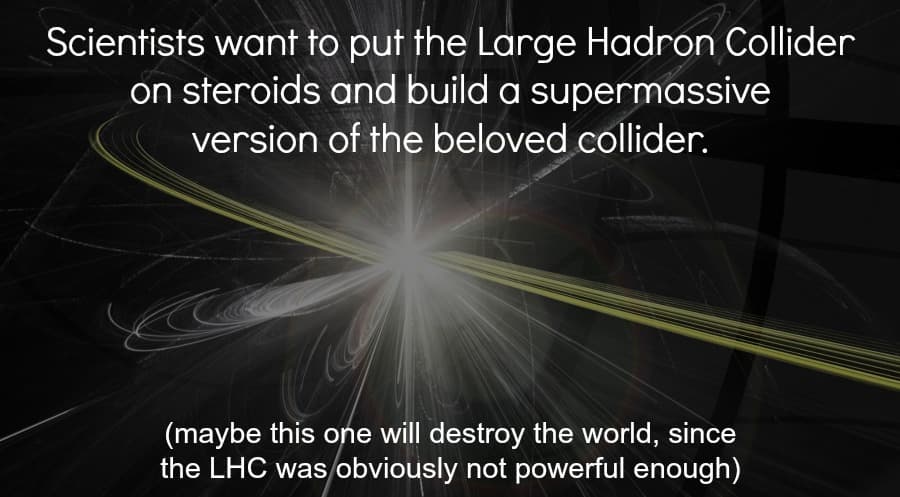 If you give scientists a gadget, they’ll want a bigger gadget. This is why it comes as no surprise that scientists already want to build the next generation of colliders. Physicists want to upgrade the Large Hadron Collider (LHC) to a machine four times larger.

What clever name did scientists come up with for this new collider? The Very Large Hadron Collider (VLHC). Let the wittiness of that name wash over you.

Unlike the International Linear Collider (a large collider that is currently being built in Japan and is expected to pick up where the LHC left off), the VLHC is mostly hypothetical. At the moment, there aren’t any real plans to build such a machine, as we don’t have any proposed locations or any international backing for the project. As Michael Peskin, a theoretical physicist at SLAC, said to a United States advisory panel in early November, “It’s only prudent to sketch a vision decades into the future.”

The basic idea of the VLHC is to build a collider that embodies the lessons we learned while building the LHC. It was a long and laborious process to get the LHC to function correctly (something that’s was a little disconcerting, as we spent spent $5-billion in an attempt to uncover the secrets of the universe), but the LHC eventually came online and helped physicists to discover the Higgs Boson, which was its original purpose. Currently, the LHC is being upgraded, and it still has a little more work to do, but most of the groundbreaking potential discoveries have moved beyond the LHC’s reach.

The VLHC will have a circumference of about 100 km (62 mi) compared to the LHC’s diameter of only 27 km (17 mi). The VLHC will also smash protons together at energies of about 100 teraelectronvolts (TeV), which dwarfs the LHC’s measly 14 TeV capability (and that’s its ability after the upgrade).

The VLHC idea is far from being set in stone. Particle physics isn’t cheap, and the physicists who want the VLHC built will have to make a strong case for it (the worldwide research budget is rather tight). Whereas the LHC discovered the Higgs, there are also a number of inconsistencies and other aspects about the discovery that puzzle scientists. One hope is that the construction of a larger collider (such as the VLHC or the ILC) will help to solve some of these mysteries (such as finding signs of supersymmetry, which a growing number of physicists think is the solution to many of our problems).

In any case, the technology and materials to build these larger colliders will need to be invented as we go. Smashing protons at these 100 TeV energies would require stronger superconducing magnets, sensors, other monitoring equipment that would need to be scaled up to meet our needs, and, of course, building the collider itself would be a feat all on its own.

Currently, some physicists are hoping such a machine will enter the construction phase in the 2020s, with completion around 2035 (conveniently timed to coincide with the LHC’s decommission). Whereas the “thinkers” are hesitant to place a price tag on the project, they estimate it should cost less than $10-billion (so, about twice as much as the LHC).

Such a collider would certainly teach us a lot about the fundamental nature of the universe and give us some answers to the questions the LHC left us asking. Of course, it will also open the floodgates to a whole new batch of questions that will probably leave us just as confused as we were before.