The Oceans of Jupiter 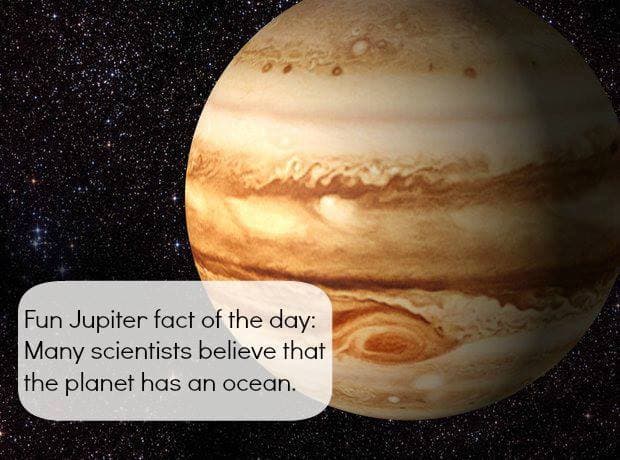 Most of you probably know that Jupiter is the largest planet in our solar system (and if you didn’t, now you do). Its size is simply staggering: Jupiter’s volume is large enough to contain 1,300 Earth-sized planets; it contains 70% of the solar system’s planetary material; and it is so large that it has over 60 moons (67 confirmed so far). This is the king of the planets. So saying that this beast has little in common with planet Earth is rather obvious. But today, I wanted to talk about one commonality between Jupiter and the Earth: oceans.

For starters, this planet is a gas giant that is composed primarily of swirling clouds of hydrogen and helium (90% of the planet is hydrogen and the other 10% is almost entirely helium). Since it is a gas giant, you might suppose that the planet couldn’t possibly have liquid oceans, but you would be wrong. Typically, when we think of oceans, we think of surfers and sail boats, we picture crystal clear waters with softly crashing waves, and imagine coral reefs teeming with strange and exotic life.

But there are many kinds of oceans.

We’ve all probably heard about the oceans that are believed to be beneath Europa (one of Jupiter’s icy moons) but not many are aware that scientists believe that Jupiter might also have oceans. Researchers think that if you were to travel down through the massive planet you would eventually reach an ocean. That’s right, Jupiter is believed to have an ocean. However, this isn’t the kind of ocean that you would want to go sailing on. This is a 25,000 mile deep soup of liquid metallic hydrogen (LMH). So, what is this strange liquid? "Liquid metallic hydrogen is a good electrical and thermal conductor," says Caltech's David Stevenson, an expert in planet formation, evolution, and structure. "Like a mirror, it reflects light, so if you were immersed in it [that would be a terrible, terrible life choice] you wouldn't be able to see anything."

This strange liquid has an odd effect—it transforms the planet into an enormous generator. This deep layer of LMH, coupled with Jupiter's extremely fast rotation (a day is only about 10 Earth-hours long), creates a magnetic field 450 million miles long. As a result, Jupiter can produce up to 10 million amps of electric current, with auroras that light up Jupiter’s poles more brightly than any other planet.

So this ocean might actually make Jupiter seem more different and exotic than it did before. Nevertheless, it proves that there are commonalities between all things  (small though they may be).