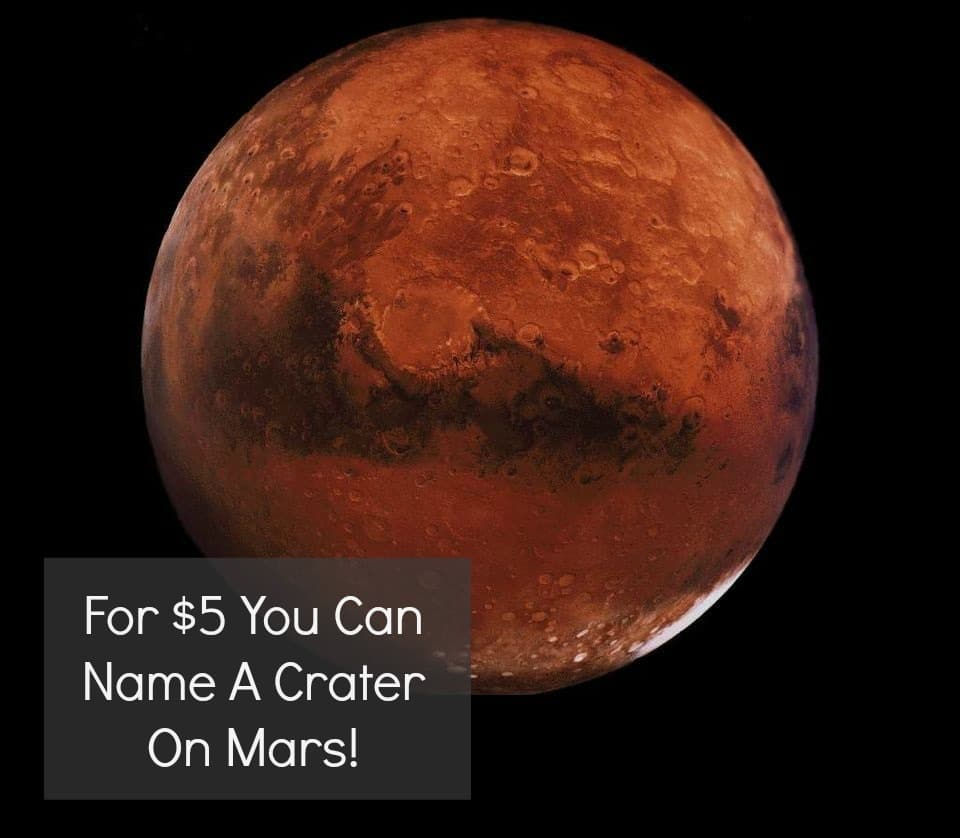 It's not just scientists who can name the far reaches of the cosmos. Now, everyone can have a their own little part of the solar system.

Granted, you will have a bit of a hard time getting to your little corner of the solar system, and it would cost you several million dollars, and of course, you won't actually own the land–but it will be named whatever you want, and you can tell everyone that if you ever visit–that's still pretty cool.

Admittedly, the process of naming places and spaces on maps is rather complicated. First, not all nations agree to the names on any given map. Many countries have their own names for places, and the designation for a landmark may differ from culture to culture (take Mt. McKinley/Denali in Alaska, for example). However, this particular Mars naming process takes other information into consideration, and (most importantly) it is for a good cause.

The naming is hosted by the space-funding company Uwingu, and the funds raised will be used to fund grants in space exploration, research, and education, which is the company's overall mission. Notably, the organization states that the named craters will not supplant other maps of the Red Planet, such as the one generated by the United States Geological Survey. Rather, the 15,000 places whose names have already been approved by the International Astronomical Union (IAU) will be incorporated into Uwingu's map.

It also must be noted that Uwingu will not seek IAU approval for the names; they will be informal or popular names. However, popular names are often, well, popular. The most famous example, perhaps, is "The Milky Way,"which is not IAU-sanctioned. And remember, it is all for a good cause.

And it is a good cause that nearly anyone can participate in–all you need is an internet connection and a few dollars to spare (5$ USD with price increases as the size of the crater increases). If you manage to secure that, you will be able to give any name of your choosing to one of the Red Planet's 500,000 or so unnamed craters (well, nearly any name of your choosing. The name will stick, unless Uwingu officials believe that the term is offensive--so this is not a time to try and take a jab at your ex or that pesky neighbor).

With this pricing, Uwingu could raise more than ten million dollars.

Former NASA science chief and CEO Alan Stern told Space.com, "We're developing this grant fund — the Uwingu fund — for people who've been hit by sequestration. There's nothing like it right now. They have no place to go; it's either NASA, NSF [the National Science Foundation] or you're out of luck."

Stern also asserts that this project is valuable in that it can provide a kind of  "cultural snapshot," which demonstrates what individuals are currently preoccupied with. "It's like taking a picture of ourselves," Stern said. "What will people put? Will there be a lot of craters named for politicians? For artists, for relatives, for places on Earth? Sports teams?"

The crater-naming project utilizes a first-come, first-served basis for their operation. So you will want to head over quick to get your name in. To get more information, and to buy a crater name of your own, go to www.uwingu.com or the indiegogo.