McKinley/Denali: The Tallest Land-based Mountain on Earth (Yes, Taller Than Everest Even) 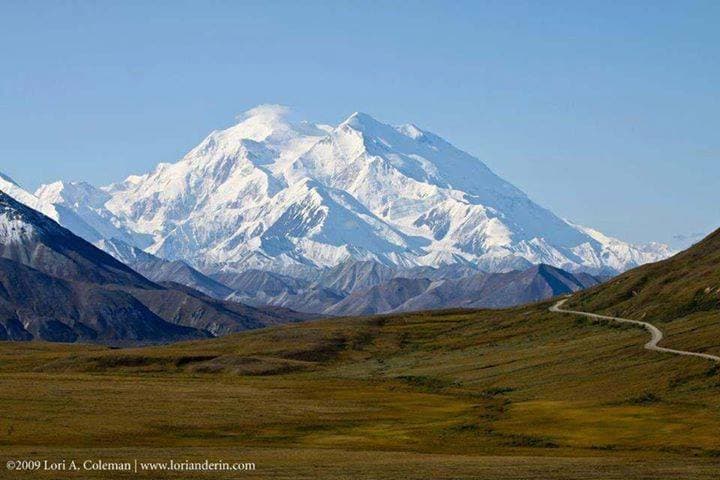 Alaska is home to some of the most amazing vistas on Earth. And few Alaskan views are more impressive than Mt. McKinley (also known as Mt. Denali). In this photo, taken during the warmer summer months, the summit looks serene. The photographer, Lori A. Coleman, told FQTQ, “The summit had not been visible for about a month before this day. We first saw it from the distance on the train, then took a bus ride through Denali National Park to get closer. There was only a small hat like cloud hovering over the mountain.”

With a summit that reaches 20,320 feet above sea level, this mountain is the highest point in the United Sates and the highest point in all of North America. In fact, when measured base-to-peak, it is the tallest mountain on land anywhere in the world (Everest is only higher because its base is at a higher elevation).

The reserve upon which this mountain sits is simply enormous. The total size of the park is 9,419 sq. miles (24,000 sq. km). If you didn't know, 9,000 square miles is larger than many states in the U.S. For example, the entire state of Massachusetts is only 8,284 sq. miles (21,455 sq km). Since it is in Alaska, unsurprisingly, 17% of the park is covered by glaciers. The largest of these is on the south side of the Alaska Range and measures 35-45 miles in length.

And of course, wherever you have glaciers you have cold…extreme cold. The average winter temperatures hover around –40 °F (-40 °C). If human skin is exposed to such extreme temperatures, moderate to severe frostbite can be expected within minutes (with the wind chill factor on this mountain, you generally have under 10min. before your skin starts to freeze and die). And the average summer temperature? A searing -10 °F (-23 °C). On December 1, 2003 the temperature station recorded a North American record wind chill of −118 °F (−83 °C).

The first successful summit was on June 7, 1913. Although almost a century has passed since this first historic trek, the mountain is still terribly dangerous. To date, over 100 people have perished on the mountain. The most recent deaths occurred this past summer. In July, an avalanche swept four Japanese climbers into a crevasse over 100 feet deep. Their bodies were never found. However, avalanches and glacial shifts are regular occurrences here. As a result, the remains of many are well hidden from sight. All in all, 44 individuals have never been found.

But life can thrive in even the harshest climes (though maybe not human life). Denali National Park is home to an abundance of wildlife, and the most interesting resident is undoubtedly the wood frog. The wood frog is the only amphibian that lives in the park. Because the park is so frigid, this resilient frog has evolved in some…peculiar ways. Namely, the frogs freeze solid during the winter. Their hearts stop beating, and they don’t breathe again until the spring thaw.

Which is, quite frankly, rather impressive.

-------------------
Image Source: Lori A. Coleman. Based near Rochester, NY, Lori specializes in family portraiture but enjoys exploring the world through her lens.  Check out more of her work at here.