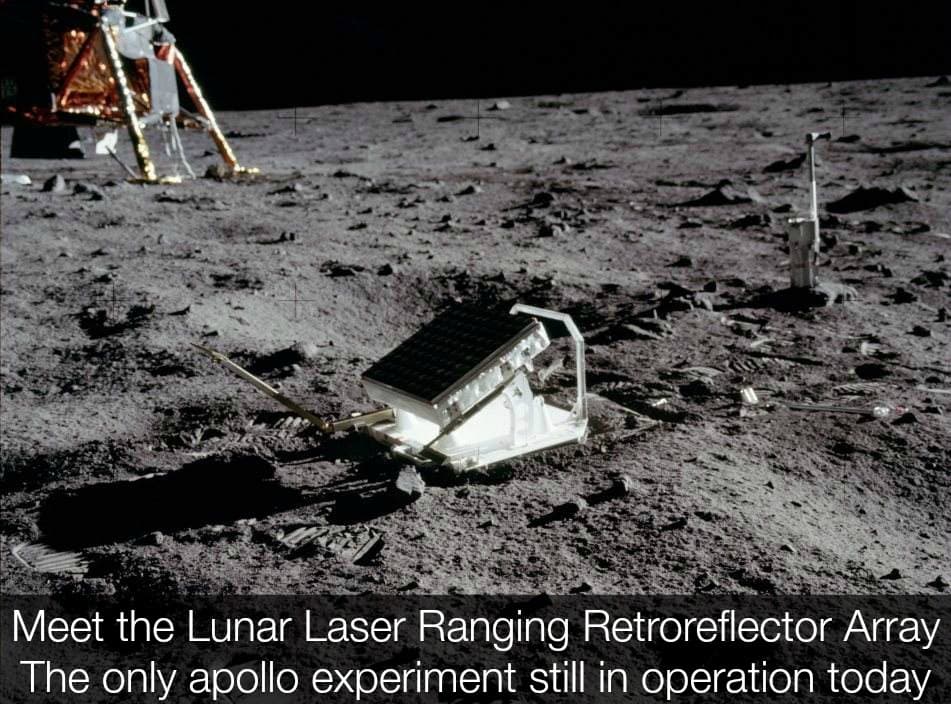 There are few moments and pictures from the moon missions that live on in the public eye; Neil Armstrong’s footprint, the US flag being planted on the moon, the lunar rover, “That’s one small step for man, on giant leap for mankind” – these are moments, pictures, videos, and sayings that will live on forever.

So, one day, when there are tourists on the moon looking at that footprint, or at the first flag planted on the moon, will they notice something 100 feet away that was also left behind? The Lunar Laser Ranging Retroreflector Array was left on the surface of the moon during Buzz Aldrin’s and Neil Armstrong’s final moonwalk. To this day, 43 years later, it is the only Apollo science experiment still running.

The Lunar Laser Ranging Retroreflector Array is a 2-foot wide panel with 100 mirrors pointing at Earth. “Using these mirrors, we are able to ‘ping’ the moon with laser pulses and measure the Earth-moon distance very precisely. This is a wonderful way to learn about the moon’s orbit and to test theories of gravity.” Explains University of Maryland physics professor, Carroll Alley. We are also able to check Einstein’s theory of gravity (better known as general relativity).

In addition to the mirror array left at the Sea of Tranquility by Apollo 11, similar arrays were also left at Fra Mauro (Apollo 14) and Hadley Rille (Apollo 15). The Soviets also have a set of mirrors parked onboard the Lunokhud 2 moon rover (which landed in 1973) in the Sea of Serenity.

So, how does this work? A laser pulse shoots out of a telescope (here on earth) and hits this array. Because the mirrors are ‘corner-cube reflectors’, they redirect the pulse and send it straight back to where it came from.

We have learned some fascinating things about the moon because of this clever device, such as:

2) The force of gravity is extremely stable, having changed less than 1 part per billion since the experiments began.

3) The moon's core is probably liquid.

Even though hitting these mirrors with a laser pulse is difficult, you can actually do this experiment yourself, assuming you had a few hundred dollars to spend in the name of science; or even with equipment found in many universities. However, you wouldn’t get the same precision as the Apache Point Observatory Lunar Laser-ranging Operation (APOLLO) currently under construction in New Mexico. Using APOLLO, researchers will have the ability to measure the moons orbit with millimeter precision, about 10 times better than our current instruments.

The Lunar mirrors do not require any power. The array also hasn’t been covered by moon dust or pelted with meteorites; as early Apollo engineers thought it might. As technology advances, scientists will continue to use this awesome and useful remnant of the Apollo era for decades, and perhaps centuries to come.