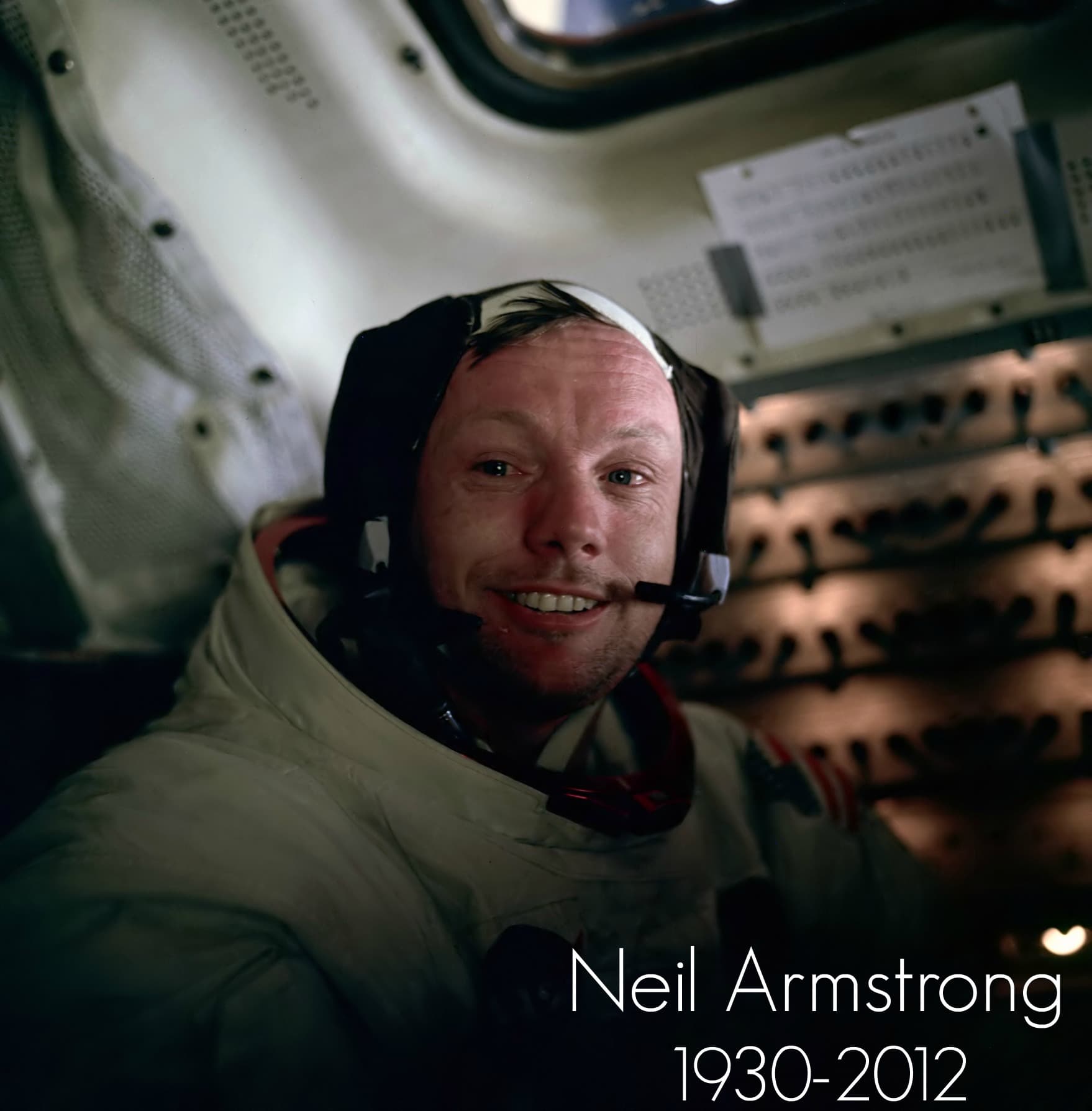 Neil Armstrong is one of the icons of modern science and engineering. He helped usher forth a new era of space travel when half a billion people watched him take the first steps on the lunar surface and heard him utter the words “That’s one small step for *a* man, one giant leap for mankind” (which is easily one of the most identifiable quotes of human history).

Armstrong was from Wapakoneta, Ohio. He loved flying and had his first experience with flight at the age of 6, in a plane know as "The Tin Goose" (or more properly referred to as a "Ford Trimotor"). When Armstrong was 14, he started taking flying lessons. At 15, he earned his flight certificate. Around the same time, he also achieved the rank of Eagle Scout in the Boy Scouts of America – an honor and achievement recognized throughout the United States (fun fact: he gave a shout out to the scouts while we was flying to the moon, during scouting’s 1969 National Jamboree).

Armstrong studied aerospace engineering at Purdue University, after which he joined the United States Navy, where he fought in the Korean War. After the war, he returned to school and, upon graduation, started one of the better known aspects of his life – he became a test pilot. This set him up to become an astronaut, and in 1958 he was selected for the Man In Space Soonest program.

His first venture into the final frontier was with the Gemini 8 mission, and he helped preformed the first ever docking of two spacecraft. Of course, Armstrong’s most notable feat comes to us in the Apollo program. The mission, perhaps, is best summed by the words of then President John F. Kennedy:

That is one of the most well know parts of John F. Kennedy’s famous speech, where he challenged America to go to the moon.

On July 16, Neil Armstrong – along with Buzz Aldrin and Michael Collins – sat atop a Saturn V rocket and blasted off, on their way to (hopefully) make history. It took four days for the Apollo astronauts to reach the moon. The Lunar Module landed on the surface of the moon on July 20, and, coming from somebody who watched the moon landing (ok, it was historical footage, but it was the originally aired, uncut footage) I think one of the coolest moments of the moon landing was then the Lunar Module (call sign: Eagle) landed on the moon (where its call sign changes). This is when Armstrong says, “Houston, Tranquility base here. The Eagle has landed.”

The rest, as they say, is history.

After Armstrong was safely back on Earth, he was a celebrity. His post Apollo career includes teaching and investigating space flight-related accidents, among other things. Of course, one of Armstrong’s biggest imprints on society is to serve as an inspiration for the young and the old, and to show us what we are capable of when we are unified behind a single goal.

He died in Cincinnati, Ohio, on August 25, 2012, at the age of 82, after complications from coronary artery bypass surgery.

Armstrong inspired us while he was alive, and he will inspire us long after he is gone. Some people say that, 100 years from now, we will look back at history and we’ll have forgotten our petty wars and conflicts. But we will still remember Apollo 11, the moon landing, Neil Armstrong, and the other great men and women who helped us take our first steps off of planet Earth.

From those of us at From Quarks to Quasars, our fans, and the whole world, thank you, and rest in peace.