The Higgs, The Dilaton & The Big Bang 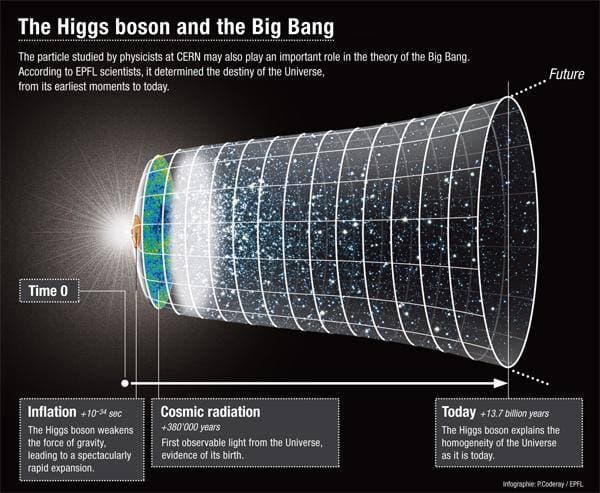 The world of particle physics was vindicated upon the discovery of the Higgs Boson (the long-sought after particle that plays a crucial role in granting elementary particles mass). Obviously, the Higgs is a key component in tackling the nature of matter itself, but now it appears as if the Higgs my provide valuable insight to the expansion of the universe and the events that came after the big bang.

A theory put forth by researchers from Switzerland's École polytechnique fédérale de Lausanne postulates that the properties of the Higgs boson particle could account for the rapid expansion of the universe that occurred nanoseconds after the big bang. This theoretical time period, called inflation, saw the universe increase uniformly in size by a factor of 10^26 (this period explains the homogenous concentration of matter density that is apparent on a macroscale). However, Inflation has been met with a wall of skepticism. Many physicists believe that the laws of physics dictate that gravity should counteract the early expansion of the universe, causing it to slow down exponentially before it ever grew to such a large size.

The team believes they have a good explanation for that. According to their theory, immediately after the big bang, the higgs boson particle would have several strange properties and behaviors, which could essentially account for both the speed and the magnitude of the rapid expansion. In essence, while the particle remained in such a condensed state, it warped the laws of physics, causing a sharp reduction in the force of gravity. During this period of time, a mathematical principle (called scale invariance) allows for the emergence of a new massless particle called the "dilaton."

The dilaton is kind of like the sister particle of the Higgs, with both displaying similar characteristics. Yet, its properties could be better suited as a model to explain dark energy, the force that is believed to be responsible for the universe expanding at an ever-increasing rate. Now that the Higgs has been accounted for, perhaps CERN and the Large Hadron Collider can shed some light on this hypothetical particle, giving us valuable insight on two of the most prominent mysteries in modern physics.