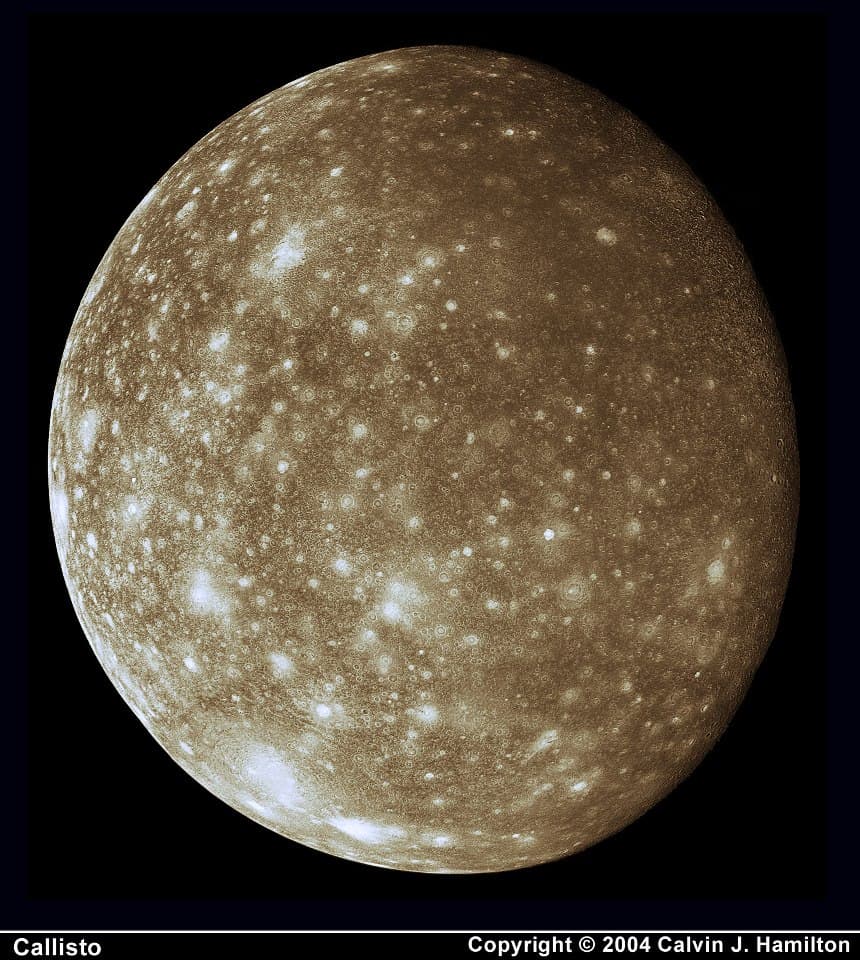 Callisto is the fourth and final of the Galilean satellites. (We hope you enjoyed our tour of the four Galilean moons of Jupiter!) Callisto is nearly the same size as Mercury by diameter, but with only about a third of the mass. This makes the final Galilean moon the thirteenth largest object and third largest moon in the solar system (by both diameter and mass). Callisto is the eighth closest moon to Jupiter and, of the Galilean satellites, is the furthest one out. In fact, Callisto orbits so far away from its host that it’s possible to see the moon without a telescope. To achieve that feat, you need very good eyesight and Callisto needs to be near its aphelion – it also helps to block out Jupiter’s light with a small object.

Callisto is not a member of the orbital resonance that affects the three inner Galilean moons. Because of this, Callisto doesn’t experience the same type of tidal heating. On the other hand, Callisto is tidally locked to its host planet. This means that the same side is always facing Jupiter in exactly the same process that keeps Earth’s moon facing the same direction. Callisto completes one full orbit once every 9.4 days.

Callisto is mostly comprised of rocky material and water ice. Many scientists believe Callisto houses a subsurface ocean located about 100 km beneath the surface. The exact location of this ocean is strongly dependent on how much (if any) ammonia is mixed in with it (since ammonia is an antifreeze).

On the surface, Callisto has obviously been abused. Callisto is one of the most heavily cratered bodies in our solar system. In fact, the crater density is so high that any new impact event would, in all likelihood, erase more craters than it creates. Minus the craters, Callisto’s geography gets very boring. There are no mountains, canyons, volcanoes, or significant geological features seen on this moon.

Just like Europa and Ganymede, Callisto is also home to a very tenuous atmosphere. This one, however, is mostly composed of carbon dioxide. The surface pressure is about seven trillionths that of Earth’s.