The Formation of the Milky Way: Two Opposing Models 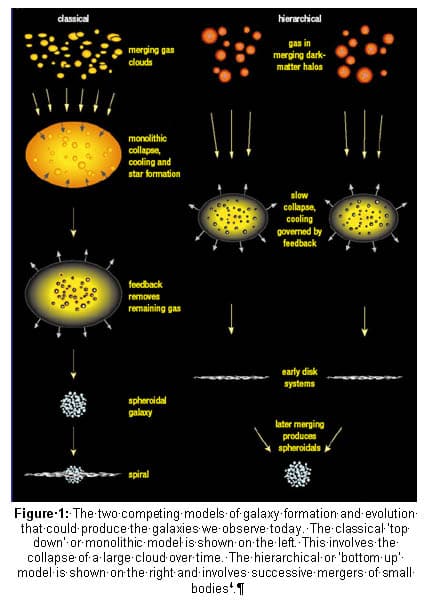 The formation of the Milky Way is one event that we're no able to physically observe (obviously). We're inside the galaxy at its current point in history, and so we can see how it currently looks. We observe the globular cluster system, any halo stars, the bulge and disk stars, and the satellite galaxies as they look today. However, we can also look deep into the universe and see what the cosmos was like billions of years in its past...at another place and time entirely.

So, where did all of the galaxies around us come from, and where did our own galaxy come from?

There are two main opposing theories come into play, and they go under a few different names: Top-Down vs Bottom-Up.

There are two main models for galaxy formation, and one of these two models is that of Top Down formation. This model is also known as the Monolithic Collapse Model, because it suggests that galaxies formed from the collapse of a very giant cloud of gas in the early universe.

This famous article was first presented by Eggen, Lynden-Bell & Sandage in 1962. They suggested that a giant cloud would start to collapse and would eventually reach equilibrium (a point where gravitational collapse would equal centrifugal force due to the increasing rotational speed of the galaxy). Under this model, the halo stars would have been the first to form and would have formed while the proto-galaxy was still contracting. This means that the halo stars and the globular clusters must have started forming at the same time that the entire galaxy did. Moreover, that they formed from the same giant cloud while it was still relatively spherical. As the cloud itself began contracting and forming a disk, the already collapsing globular cluster systems took eccentric orbits around the center of the gravitational collapse and were held together by self gravity. This is the explanation given for the globular cluster systems that we see today and for the disk of stars around the galaxy.

As the galaxy is collapsing and the globular clusters are forming, they're able to keep their eccentric orbits because the stars are effectively non collisional (unlike gas) and thus don't lose their kinetic energy. This means that the first generation of stars remain with their eccentric orbits, but the second generation of stars, which formed out of the already collapsed galaxy, are able to have circular orbits because the gas that they formed out of had already fallen into a circular orbit.

One of the main potential issues with this report is that it was written back in 1962, and many advancements and discoveries have been made in the past five decades since the paper was written. A few of these main advances would be: the discovery of dark matter and dark energy from the WMAP data, although the actual existence of them has not physically been proven; higher red shift observations; and most importantly, observations from Hubble Space Telescope (together with images from the Hubble Ultra Deep Field) that indirectly point to the existence of the things previously mentioned.

The Bottom-Up Model, which is better known as Hierarchal Clustering, has lead to the creation of the Lambda-Cold Dark Matter Model, which is the preferred and most accepted way in which the galaxies formed. It's by no means perfect. However, although it does need a bit more work, it does quite accurately explain most of the universe as we know it.

The Bottom-Up Model pretty much states that all of the galaxies in the universe, the Milky Way included, formed and grew through galactic mergers. The main difference that has been made with the Lambda-CMD Model is that Cold Dark Matter has been added into the picture to explain observations of galaxy rotation curves and some strange observations of galaxy mergers.

With the Bottom-Up it is thought that the original things to form would be about the size of current day globular cluster systems that contain more of their original gas.

From the picture on the left we can get a good idea of what the Bottom-Up Model is - lots of smaller galaxies, potentially only the size of globular clusters, merging to create dwarf galaxies and then growing from there.