The Evolution of Earth's Protector; Its Atmosphere: 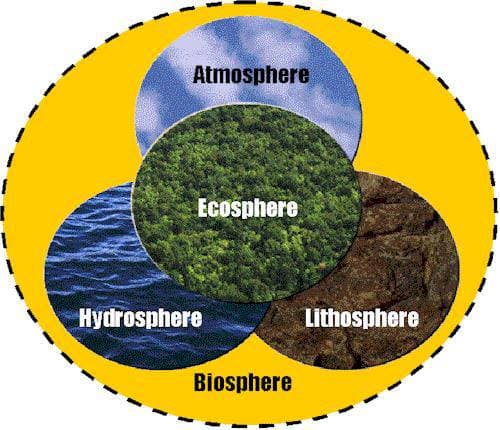 When cell membranes first began to form from fatty acids as far back as 3.8 billion years ago, prokaryotes were center stage for the opening act of life on our planet. These prokaryotes included bacteria and archaea – often single-celled microorganisms with no nucleus within the membrane of fatty acids and no organelles that perform a dedicated function (much like the organs in our body).

Stromatolites are accretionary structures formed from sediments of biofilms which contain bacteria, archaea, protozoa, fungi and algae. Some stromatolite fossils are extremely old, dating back as far as 3.5 billion years ago. This has led many scientists to believe that the evolutionary branch that gives us eukaryotes (such as blue-green algae) may have diverged from prokaryotes at around the same time prokaryotes emerged or just after. Considering how much more complex an organism has to be to have a nucleus protecting its DNA as well as organelles performing their own duties compared to the prokaryotes of the same period, this will be rather amazing if proven to be true.

These stromatolite fossils give us clues for the first signs of oxygen production on Earth. Strangely enough, oxygen is a poison. No life had yet evolved to make use of it. It corrodes metals and was no more than refuse on the early Earth. By around 2.45 BYA, there was enough of this poison called oxygen in the atmosphere to oxidize large amounts of iron, leaving bands of the rusted metal to form on the ocean floor for us to find as evidence of this change in our atmosphere. As a result, anaerobic bacteria near the surface began to quickly die off, leaving an environmental niche open for opportunistic eukaryotes and prokaryotes to fill. These would be blue-green algae and cyanobacteria (a type of prokaryote that gets its energy from photosynthesis and thereby releases oxygen as waste). This in turn led to the production of even more oxygen, pushing the prokaryotes except for the unique cyanobacteria to exit the stage. A new act was about to start.

This is where we get hard evidence of eukaryotes in the fossil record, presumably because the conditions were more conducive to their way of life and provided more chances for their story to be preserved. This period is between 1.8 and 2.2 BYA. It would be nearly a billion years or so later, around 1.1 BYA, before there was enough oxygen in the atmosphere for more complex eukaryotes such as land plants and animals to begin their evolution toward making use of this newly abundant gas.

Also around 1.1 BYA, sex makes its first appearance. By the time of the Cambrian Explosion around 540 MYA, the colonization of major areas of land by plants and animals was well underway. It is likely then or a little earlier that the Earth experienced its first fire; most likely from a lightning strike. If we could somehow have been around back then, we would just now have the fuel necessary to make fire for the first time. It was an unrealized potential lying dormant in matter. Because of its oxygen, fire is unique to the Earth. A new symbiotic relationship was born. Plants produce O2 from CO2. Animals produce CO2 from O2. Our fate is inevitably tied to theirs. In a biosphere such as ours, it would be prudent to treat plants as though they were as important as we know them to be. When it comes down to “who ate whose crap first”, we are definitely the bigger scavengers.

If you are on the fence about the existence of evolution, check out our article: Three Main Pieces of Evidence Supporting Evolution. You can also read read our article that clears up the primary misunderstandings of evolution.