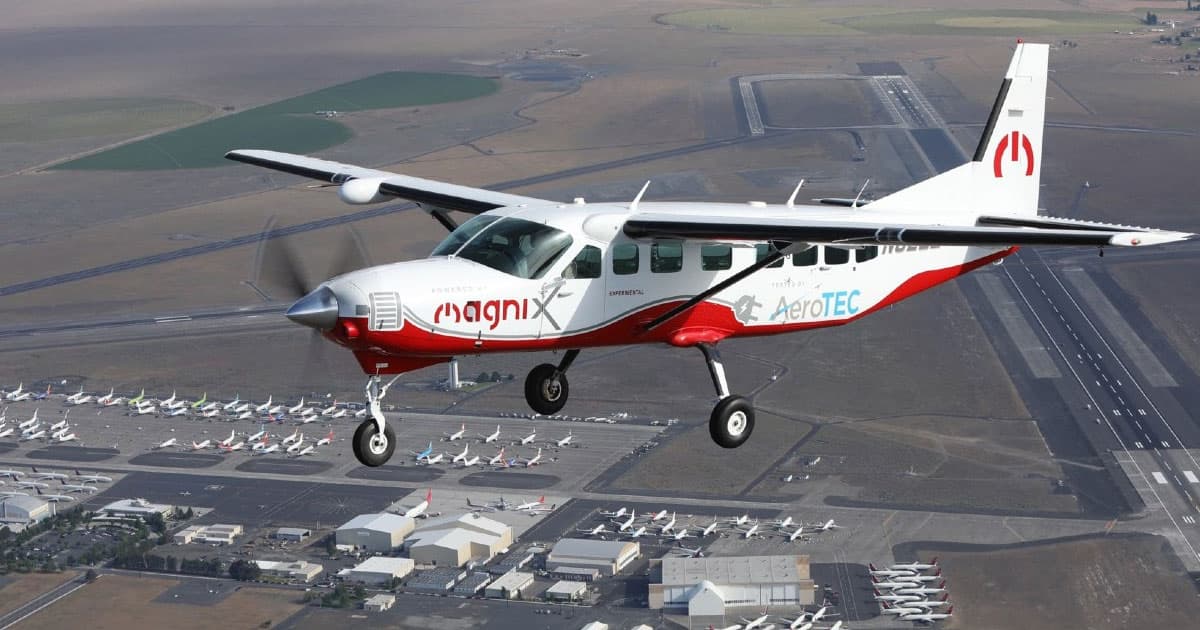 Watch the World's Largest Electric Plane Take to the Skies

"The challenge is that batteries are not as power potent as fuel."

"The challenge is that batteries are not as power potent as fuel."

The plane, a Cessna Grand Caravan 208, was retrofitted with an electric motor and flew for a half hour after its first-ever takeoff, Tech Xplore reports. While there's a long way to go before the aviation industry stops depending on fossil fuels, the test is an important first step toward cleaner skies.

For now, the plane can carry a pilot and nine passengers, according to Tech Xplore. Aside from regulatory hurdles that the newly-forming electric plane industry will need to navigate, larger planes will also require energy storage devices more powerful than any scientists can make today.

"The challenge is that batteries are not as power potent as fuel," Roei Ganzarski, CEO of the electric motor manufacturer Magnix, told Tech Xplore. "We chose lithium ion, because at this stage, it's the most proven technology or proven chemistry to provide the energy and safety that we need to fly the aircraft."

But once energy storage technology catches up, Ganzarski expects electric planes to not only cut out a major source of carbon emissions, but to make air travel cheaper as well.

That's because electric motors, compared to conventional plane engines, are far simpler from a mechanical standpoint. That could mean as much as an 80 percent drop in maintenance costs, which would hopefully translate into cheaper tickets and more flights to smaller airports as well.

More on electric planes: We've Never Been This Close to Making Electric Flight a Reality

Charged Up
Startup Says Amazing New Battery Lets EVs Drive 400 Miles, Recharge in 15 Minutes
Jun 22
Read More
Top It Off
Startup Says Solar-Powered Electric Car Never Needs to Charge
12. 7. 20
Read More
How the Turntables
Tesla Is Now Worth More Than ExxonMobil
7. 2. 20
Read More
+Social+Newsletter
TopicsAbout UsContact Us
Copyright ©, Camden Media Inc All Rights Reserved. See our User Agreement, Privacy Policy and Data Use Policy. The material on this site may not be reproduced, distributed, transmitted, cached or otherwise used, except with prior written permission of Futurism. Articles may contain affiliate links which enable us to share in the revenue of any purchases made.
Fonts by Typekit and Monotype.