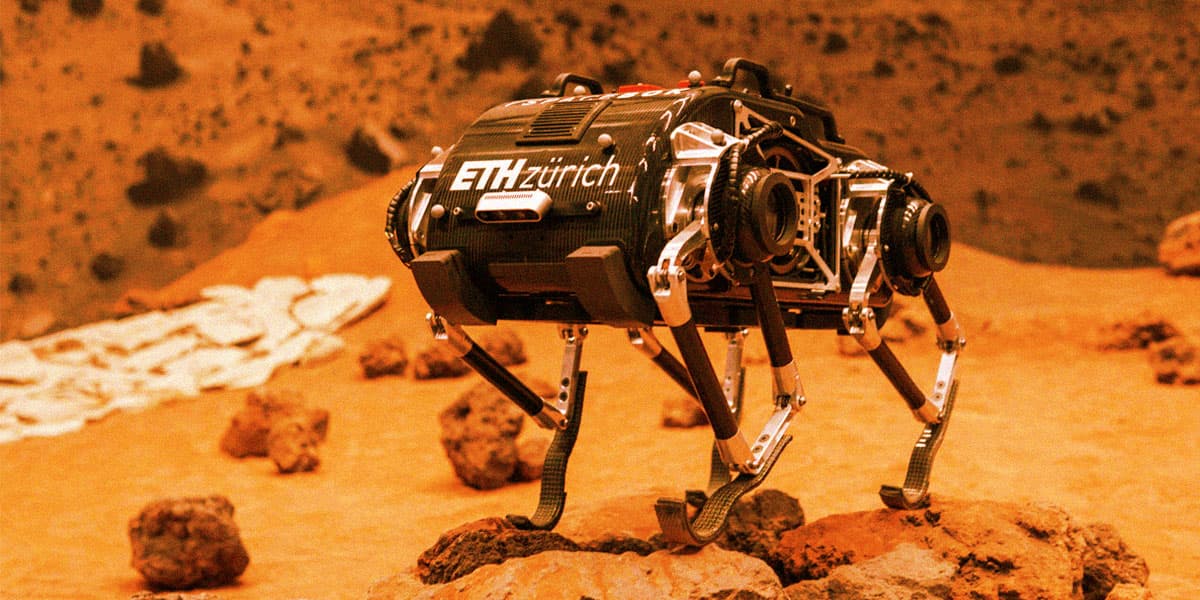 SpaceBok was originally designed to leap around on the Moon. But now, it may be headed to Mars instead.

SpaceBok was originally designed to leap around on the Moon. But now, it may be headed to Mars instead.

Engineers from ETH Zurich in Switzerland and the Max Planck Institute in Germany built a small quadrupedal robot meant to leap around on the surface of the Moon, much like the Apollo astronauts did half a century ago.

Now SpaceBok, named after the bounding springbok antelope, is getting a Mars upgrade — on the Red Planet, it will have to weather much stronger gravity than on the Moon and face more treacherous terrain, as Wired reports.

The concept is a strong one. If it were to ever land on Mars, a walking robot could explore terrain that has so far been off limits to wheeled rovers — and maybe even the planet's mysterious caves.

Going for a Hike

The sandy, rocky, and steep slopes of the inhospitable Martian surface make it a difficult terrain for a four-legged robot to cross. Special gaits and different kinds of feet, however, could give SpaceBok a big leg up.

For instance, a "static" gait where at least three limbs make contact at a time, or planar feet — flat, snowshoe-like swiveling circles — could allow the tiny crawler to successfully tackle Mars' unforgiving terrain.

They put the various configurations of the robot to the test inside a giant sandbox. Using flat feet, the robot was able to get up a steep 25-degree incline.

"One of the surprise findings was that the point feet were not performing so bad on this particular slope, because of that high sinkage," ETH Zurich roboticist Hendrik Kolvenbach, lead author of the associated paper, told Wired. "Basically, they provide quite a stable stance."

The team did note the flat feet caused the rover to use more energy, and is now looking at options that are somewhere between flat and pointy feet.

In addition to helicopters, walking robots could soon stand the chance of venturing into the many still unexplored areas of Mars — one small step at a time.

READ MORE: How Do You Make a Robot Walk on Mars? It’s a Steep Challenge [Wired]

More on Mars: Check Out This Huge Hole That China’s Mars Rover Blasted Into the Ground While Landing

The Other Left!
A Guy Who Drives NASA's Mars Rover Is Dishing About the Experience
12. 23. 20
Read More
Hammer Time
Crap: NASA's Mars "Mole" Finally Started Digging, Then Hit Another Obstacle
7. 8. 20
Read More
Mars Copter
Here's NASA's Ingenious Way of Testing Its Mars Helicopter
6. 23. 20
Read More
+Social+Newsletter
TopicsAbout UsContact Us
Copyright ©, Camden Media Inc All Rights Reserved. See our User Agreement, Privacy Policy and Data Use Policy. The material on this site may not be reproduced, distributed, transmitted, cached or otherwise used, except with prior written permission of Futurism. Articles may contain affiliate links which enable us to share in the revenue of any purchases made.
Fonts by Typekit and Monotype.