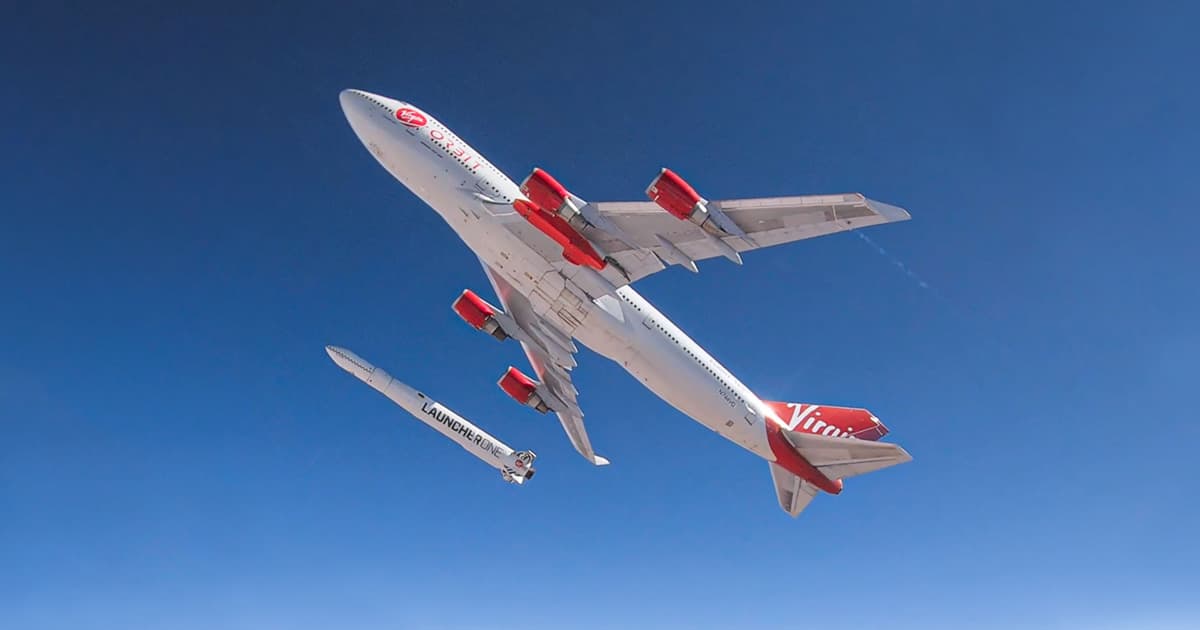 It's the first time the company launched a private payload into low-Earth orbit from its airliner.

It's the first time the company launched a private payload into low-Earth orbit from its airliner.

Satellite delivery company Virgin Orbit — not to be confused with the space tourism company Virgin Galactic, though both were started by Richard Branson — just flew a Boeing 747 to a lofty height before launching a space rocket strapped to the bottom of one of its wings.

The modified 747, dubbed Cosmic Girl, took off from the Mojave Air and Space Port in California early Wednesday morning with a small rocket in tow. At an altitude of around 33,000 feet, the rocket fired its own engines and took off to low-Earth orbit on its own.

The mission, whimsically called "Tubular Bells: Part One," marks the first time Virgin Orbit has launched a payload for paying commercial customers — and the kickoff of a novel way of delivering private satellites into orbit.

The rocket carried payloads for three customers from three different countries, including the US Department of Defense Space Test Program, Polish satellite company SatRevolution, and the Royal Netherlands Air Force.

Virgin Orbit completed its first successful orbital launch demonstration in January when LauncherOne, a rocket strapped to the wing of Cosmic Girl, delivered 10 CubeSats into low-Earth orbit for NASA. LauncherOne failed to reach orbit during a previous attempt in May 2020 due to a ruptured fuel line.

Launcher One, a 70-foot rocket, is capable of delivering about 1,100 pounds of payload into orbit.

It's a strikingly different approach to delivering private payloads into orbit when compared to SpaceX's tried-and-true method of reusing Falcon 9 rockets. And it may just pay off in the long term, as more and more private companies become interested in launching their own satellites.