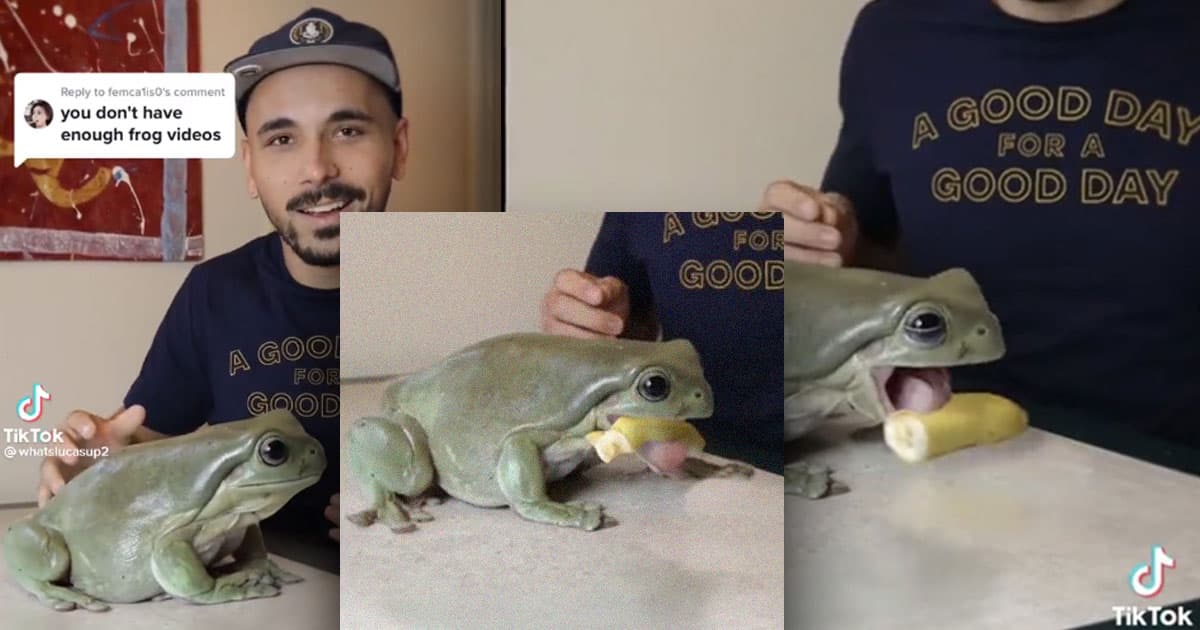 "We have been BAMBOOZLED."

"We have been BAMBOOZLED."

Dumpy — gotta say: perfect frog name — is owned by videographer and Frog Guy Lucas Peterson, who 0n Wednesday posted a now- viral TikTok of his convincingly massive pet. In the video, our Big Boi froggo can be seen just hangin' out, eating massive chunks of a banana in enormous gulps. Alas, though, the clip is really just an editing flex on Peterson's behalf.

"This is not his real diet. This is just for fun and comedy," Peterson wrote in the caption. "He typically eats 12 crickets a week in his terrarium. His real size is about 4-5 inches he's enlarged with VFX perspective tricks."

Please look at how big this fucking frog is. pic.twitter.com/uQb1IAIKyP

But while Peterson did provide a disclaimer, many netizens failed to get the memo.

"Dude look I'm super confused and I'm [gonna] need someone to make this make sense for me," wrote one commenter. "What is going on here?"

"I thought frogs grew to like, tomato size. You got a blinking bowling ball sitting around," responded another incredulous TikTokker. "So excuse me if I have some questions."

"We have been BAMBOOZLED," wrote another, which prompted Peterson to respond with a chuckling "ha ha sure," adding that "Dumpy might not be this big but he is a real frog of mine."

At four or five inches in length, Dumpy would still be pretty big, especially for a tree frog. And as Peterson clarified in his disclaimer, any of these domesticated amphibians really just eat crickets. (It's worth noting, though, that Africa's massive goliath frogs can actually get this big).

Do we wish Dumpy were actually a toaster-sized monstrosity? That'd be cool, but we do love this amphibious king as he is.

"What an absolute unit. It looks like a sentient zucchini fritter," one Twitter user expressed in response to someone showing off their own — normal sized — white frog. "10/10 frog."

Fish Frenzy
Is That Viral Catfish/Egg/Coke/Mentos Vid Real? An Investigation
11. 16. 19
Read More
Rest in Punks
The Ultimate Sign That NFTs Are Uncool: Museums Are Now Embracing Them
Yesterday
Read More
Meet Me at The Crypties
Glitzy Crypto Award Show Gets Weird When Host Keeps Roasting Guests For Dismal Failure
Yesterday
Read More
+Social+Newsletter
TopicsAbout UsContact Us
Copyright ©, Camden Media Inc All Rights Reserved. See our User Agreement, Privacy Policy and Data Use Policy. The material on this site may not be reproduced, distributed, transmitted, cached or otherwise used, except with prior written permission of Futurism. Articles may contain affiliate links which enable us to share in the revenue of any purchases made.
Fonts by Typekit and Monotype.