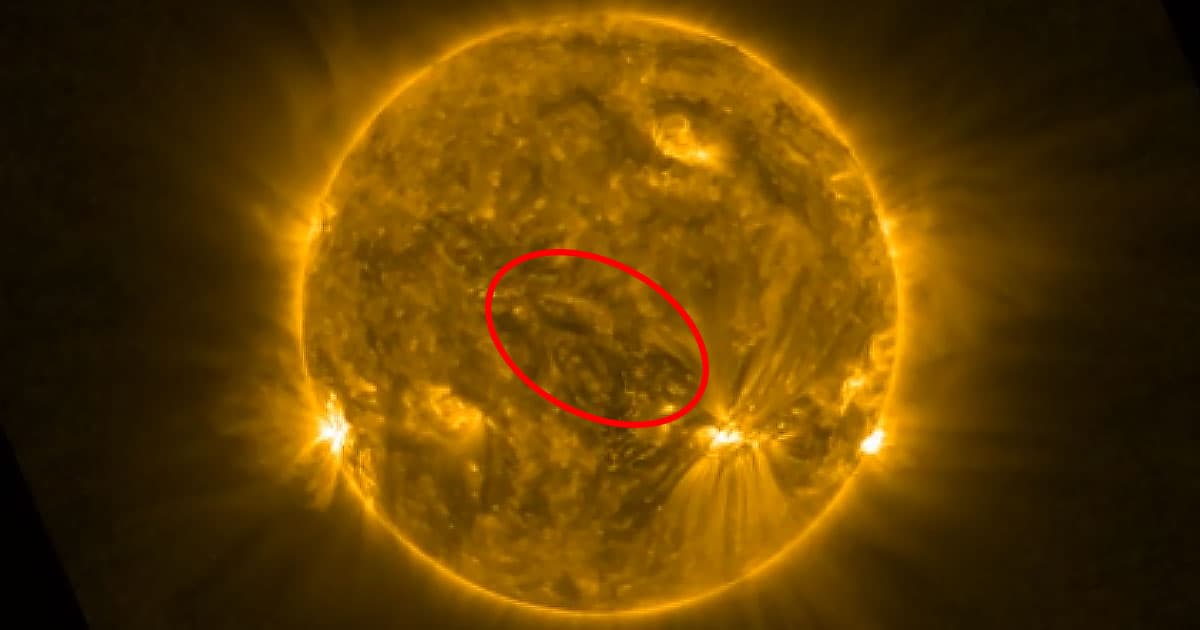 The sheer size will boggle your mind.

The sheer size will boggle your mind.

Snakes on a Star

The Sun is no stranger to foreboding spots and the occasional flare up. But the European Space Agency's (ESA) Solar Orbiter has spotted something way more bizarre — and cool — than usual: a giant "snake" slithering across the Sun's surface that might have been a precursor to an even more enormous event.

The Solar Orbiter captured the "snake" on September 5 as it approached the Sun for closer images. Released by the ESA as a video, it's in fact a timelapse of multiple images recorded over three hours. That's three hours to traverse the surface of the Sun — meaning the "snake" traveled at an astounding 106 miles per second, according to researchers. On Earth, that's fast enough to blaze around its circumference in a few minutes.

Spot the solar snake slithering across the surface of the #Sun! 🐍

This ‘tube’ of cooler atmospheric gases snaking its way through the Sun’s magnetic field was captured by @EuiTelescope on 5 September, and was precursor to a large eruption 💥

What's actually writhing across the solar surface is a tube of cooler atmospheric gasses shooting through the Sun's magnetic field. When we say "cooler," however, it's in relative terms — those gasses came in the form of plasma, a state of superheated matter.

In the Sun's atmosphere, where it can get hotter than one million degrees Fahrenheit, the gasses lose their outer electrons and become electrically charged plasma, making them susceptible to magnetic fields. Here, the plasma snake darts along a magnetic filament that spans much of the Sun's surface.

"You're getting plasma flowing from one side to the other but the magnetic field is really twisted," explained David Long, an astrophysicist at Mullard Space Science Laboratory who's investigating the snake, in a statement. "So you're getting this change in direction because we're looking down on a twisted structure."

Curiously — and perhaps most importantly — the snake originated from an active region of the Sun that would soon erupt in a coronal mass ejection, spewing out billions of tons of plasma. According to the Solar Orbiter's data, the eruption was one of the most intense it's ever recorded.

That leaves the possibility that the snake was a precursor to the enormous eruption, making the phenomena all the more intriguing. Long and his colleagues are investigating this possibility, and their findings may help shed some light on the volatile activity on the Sun's surface.

More on the Sun: NASA Captures the Sun at Perfect Moment So That It Has Goofy Grin

Get Wet
Scientists Say the Sun May Have Kinda Sprayed the Earth With Water
12. 1. 21
Read More
Pizza Personnel
Domino's Buying Hundreds and Hundreds of Electric Delivery Vehicles
Wednesday
Read More
Another One
Coinbase May Be in Real Serious Trouble Now
Wednesday
Read More
+Social+Newsletter
TopicsAbout UsContact Us
Copyright ©, Camden Media Inc All Rights Reserved. See our User Agreement, Privacy Policy and Data Use Policy. The material on this site may not be reproduced, distributed, transmitted, cached or otherwise used, except with prior written permission of Futurism. Articles may contain affiliate links which enable us to share in the revenue of any purchases made.
Fonts by Typekit and Monotype.