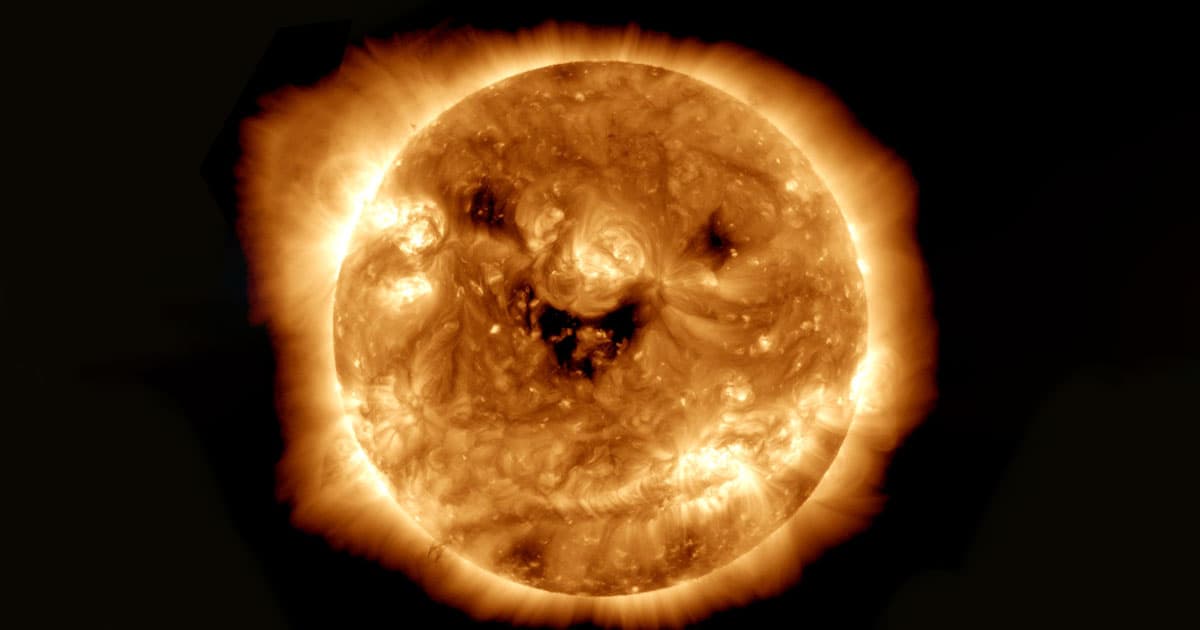 "More so than a smiley face, its eyes are like gleaming laser beams..."

"More so than a smiley face, its eyes are like gleaming laser beams..."

No, you're not seeing things — that really is a picture of the sun "smiling," and there's a real scientific reason behind it, too.

In a Twitter post, NASA noted that the goofy, adorable grin on our life-giving star is actually an example of "coronal holes," which occur when "fast solar wind gushes out into space."

Indeed, the photo shot by the agency's Solar Dynamics Observatory does look a bit devilish — which may belie the effects it's going to have on our planet.

Today, NASA’s Solar Dynamics Observatory caught the Sun "smiling." Seen in ultraviolet light, these dark patches on the Sun are known as coronal holes and are regions where fast solar wind gushes out into space. pic.twitter.com/hVRXaN7Z31

Cute as the photo is, it also signals real-life solar events that could be devastating here on Earth.

As the Washington Post and other outlets describe, coronal holes like these only occur when our star is getting ready to spew solar wind at us at extraordinary velocities.

"More so than a smiley face, its eyes are like gleaming laser beams sending particles that can cause severe disruptions to the atmosphere on Earth," Brian Keating, a physics professor at the University of California at San Diego, told WaPo.

If those particles hit Earth in lower doses, they'll result in gorgeous Aurora Borealis light shows, Keating said. But if they come in droves, they could cause huge electromagnetic storms that and majorly destabilize our telecommunication equipment.

There's not a ton of historical precedent to predict the latter happening now, but it is out there, the physics professor said.

The last time such a geomagnetic storm occurred in 1859, and it was so bad, it caused fires at telegraph stations.

While there was a similar coronal hole face apparition in 2014, Keating said that we've been long overdue for a big storm — and indeed, sun scientists have been warning about the incoming solar storm season for a long time now.

"Scientists expect that to happen on average, with a couple percent probability, every year, and we’ve just dodged all these magnetic bullets for so long," the UCSD professor told WaPo. "So it could be really scary, and the consequences could be much more dramatic, especially in our technology-dependent current society."

For now, all we can do is hope the Sun keeps smiling down on us without wreaking havoc.

More Sun: Something Unknown Seems to Blast Earth With Radiation Every Thousand Years or So

Get Wet
Scientists Say the Sun May Have Kinda Sprayed the Earth With Water
12. 1. 21
Read More
NASA Found What Appears to Be an Enormous Dark Spot on the Sun
7. 14. 16
Read More
Pizza Personnel
Domino's Buying Hundreds and Hundreds of Electric Delivery Vehicles
Wednesday
Read More
+Social+Newsletter
TopicsAbout UsContact Us
Copyright ©, Camden Media Inc All Rights Reserved. See our User Agreement, Privacy Policy and Data Use Policy. The material on this site may not be reproduced, distributed, transmitted, cached or otherwise used, except with prior written permission of Futurism. Articles may contain affiliate links which enable us to share in the revenue of any purchases made.
Fonts by Typekit and Monotype.