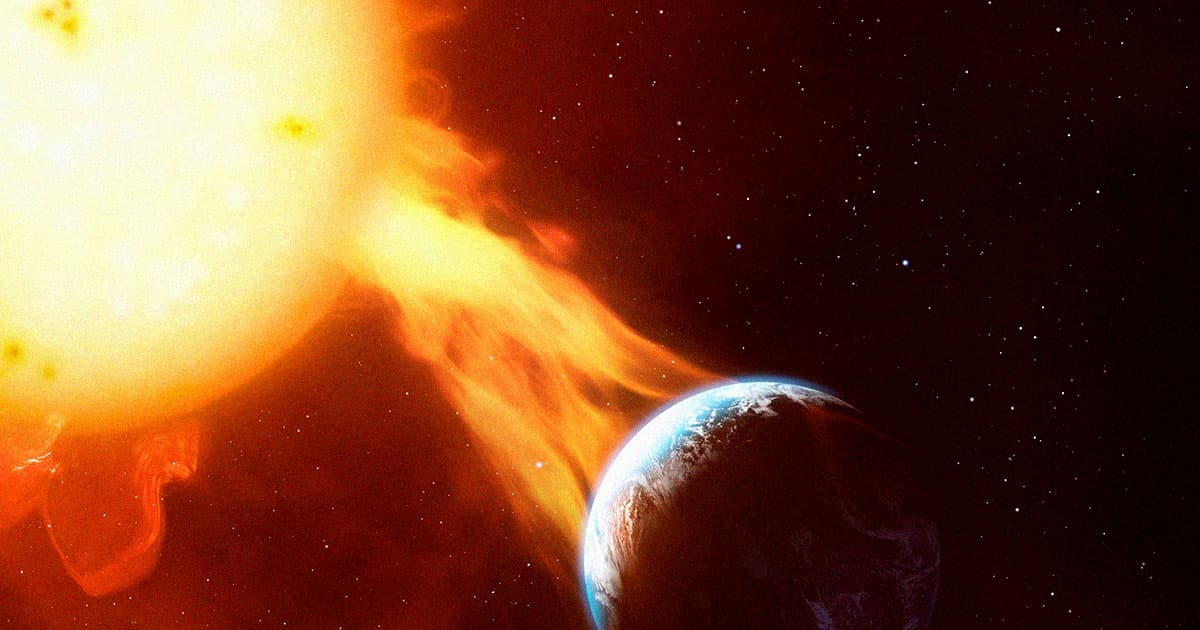 "There's a kind of extreme astrophysical phenomenon that we don't understand and it actually could be a threat to us."

"There's a kind of extreme astrophysical phenomenon that we don't understand and it actually could be a threat to us."

Solar flares were once thought to be responsible for historical spikes in the Earth's radiation levels. But a new study suggests that those spikes of radiation may not be caused by solar flares as once believed, seemingly meaning that something much more powerful — and still unknown to us — may have been responsible instead.

"There's a kind of extreme astrophysical phenomenon that we don't understand and it actually could be a threat to us," Benjamin Pope, coauthor of the study and astrophysicist at the University of Queensland, told the Australian Broadcasting Corporation.

The study, published Wednesday in the Proceedings of the Royal Society A, examined tree rings for spikes of carbon 14, a radioactive isotope of carbon whose increased presence represents spikes in radiation levels on Earth. The radiation upticks, in turn, are caused by mysterious astrophysical events called "Miyake events," so named after the Japanese scientist that discovered them.

According to Pope, there have been six known Miyake events in the past 10,000 years, with the latest having occurred in 993 CE. Until now, they were believed to be caused by severe solar storms that typically occurred at the 11 year peak of sunspot activity in the solar cycle.

But after crunching the data, Pope and his team found that these radiation spikes cropped up all across the solar cycle, not just at its 11 year peak, throwing a big wrench in the prevailing theory.

Even stranger is how long some of the spikes lasted.

"At least two, maybe three of these events... took longer than a year, which is surprising because that's not going to happen if it's a solar flare," Pope told the ABC.

The last powerful solar flare to strike our planet occurred in 1859. Known as the Carrington Event, it severely damaged telecommunications infrastructure at the time.

In an age heavily reliant on electronics and the internet, a Carrington-like event could be monumentally more devastating today. But ominously, whatever caused the Miyake events would have been up to 100 times more powerful than even the Carrington.

So what ungodly force could have been responsible for these Miyake events?

Pope thinks it could be an unholy barrage of solar flares bursting in quick succession.

"Not just one solar flare, but recurrent solar flares going off again and again," he explained.

As for the odds of experiencing such an event anytime soon, Pope thinks they're slim — but maybe not that slim.

"Based on available data, there's roughly a one per cent chance of seeing another one within the next decade," Pope said in a press release.

More on the sun: Ludicrously Close Up Shots of the Sun Look Nothing Like You'd Expect

Health Revelation
Chris Hemsworth Reveals Grim Genetic Test Results, Will Take Break From Acting
Tuesday
Read More
PDA
Elon Musk Is Faving Posts on Twitter That Are Making Our Skin Crawl With Embarrassment
Nov 9
Read More
Baited
That "Research" About How Smartphones Are Causing Deformed Human Bodies Is SEO Spam, You Idiots
Nov 3
Read More
+Social+Newsletter
TopicsAbout UsContact Us
Copyright ©, Camden Media Inc All Rights Reserved. See our User Agreement, Privacy Policy and Data Use Policy. The material on this site may not be reproduced, distributed, transmitted, cached or otherwise used, except with prior written permission of Futurism. Articles may contain affiliate links which enable us to share in the revenue of any purchases made.
Fonts by Typekit and Monotype.