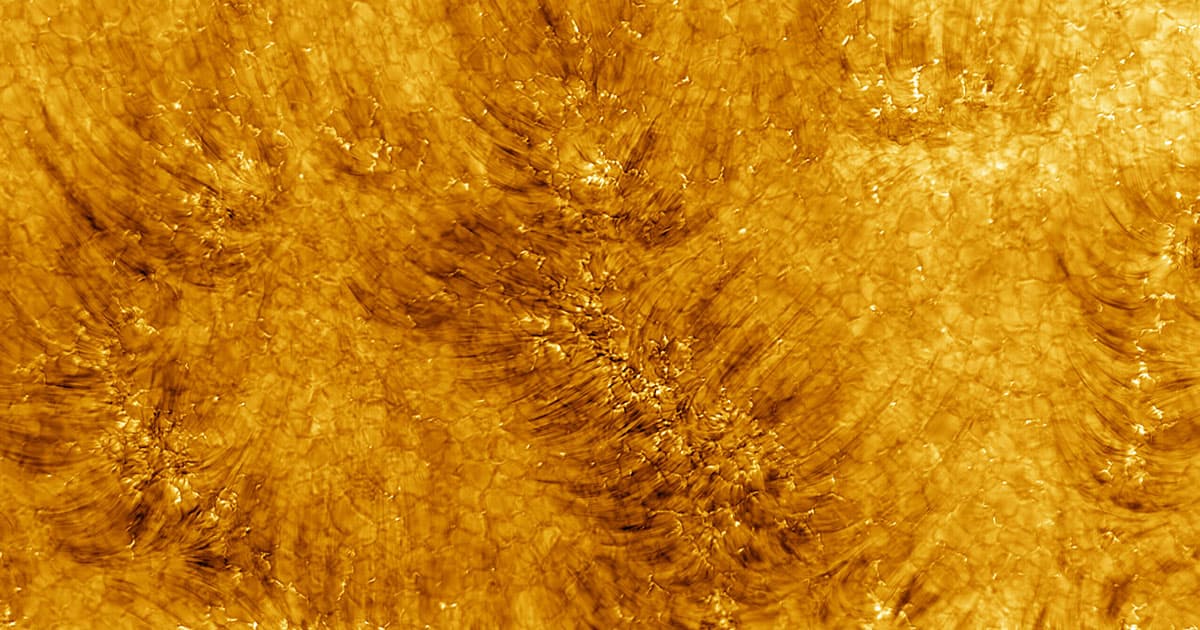 The images are absolutely breathtaking, and once again demonstrate that up close, the Sun looks nothing at all like we might imagine a giant, burning ball of gas would. This time, the Sun's chromosphere — the middle layer of its atmosphere — shows a softer, almost delicate side of our home star. In the words of one observer, it looks almost like shag carpet.

In the chromosphere, lines of burning plasma known as "spicules" apparently look like golden strands of Rapunzel's hair, or even something close to smooth, crystallized honey. Spicules, in short, are thin, bristle-like spurts of plasma that cover the Sun's face like a star-scale version of peach fuzz. (Think pom poms, or those lil' soot sprites from "My Neighbor Totoro.")

According to Smithsonian Magazine, spicules erupt from the Sun's surface at roughly 60 miles per second, and can extend roughly 6,000 miles. While they might be beautiful, don't let them fool you! Get tangled with one, and you'd probably be vaporized. That being said, they do exist for a purpose other than, you know, spitting hot fire — scientists believe that spicules help the star sustain, balance, and transfer energy through its many regions.

"Our new results prove that spicules are formed because of flux cancellation at the lower atmosphere," astrophysicist Dipankar Banerjee, co-author of a 2019 spicule study published in the journal Science, told Live Science back in 2019, "and they also provide good amount of energy for the heating of the upper atmosphere of the sun."

Previous close up imagery has shown Sun spots to pretty much be, uh, portals to hell, and some blobs of plasma captured in the past somehow look like caramel corn. Looks like we're now adding a fuzzy inferno to that list — so here's to whatever the Inouye Solar Telescope surprises us with next.

READ MORE: Stunning New Images Show The Face of The Sun Like We've Never Seen It Before [ScienceAlert]

More on sunny surprises: The Sharpest-Ever Image of a Sunspot Looks Like a Portal to Hell

Sun Gazer
Researchers Want to Use the Sun As a Giant Telescope to Look for Aliens
Jul 25
Read More
Get Wet
Scientists Say the Sun May Have Kinda Sprayed the Earth With Water
12. 1. 21
Read More
Solar Flyby
Here's the Closest Picture We've Ever Taken of the Sun
12. 13. 18
Read More
+Social+Newsletter
TopicsAbout UsContact Us
Copyright ©, Camden Media Inc All Rights Reserved. See our User Agreement, Privacy Policy and Data Use Policy. The material on this site may not be reproduced, distributed, transmitted, cached or otherwise used, except with prior written permission of Futurism. Articles may contain affiliate links which enable us to share in the revenue of any purchases made.
Fonts by Typekit and Monotype.