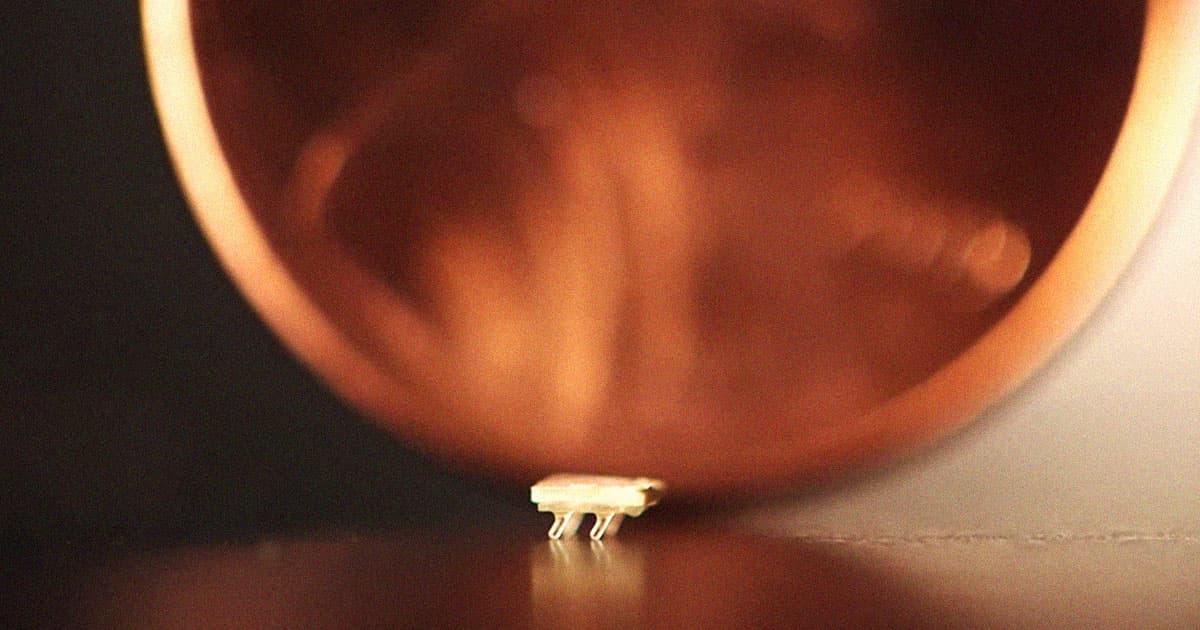 These Vibration-Powered Microbots Are Almost Too Small to See

Each weighs slightly more than a grain of sand.

Each weighs slightly more than a grain of sand.

Researchers from Georgia Tech have created microbots so tiny, they make a penny look massive — and they could one day attack diseases in your body.

According to the team's paper, which was accepted for publication in the Journal of Micromechanics and Microengineering, each of the 3D-printed microbots weighs just five milligrams, slightly more than a grain of sand.

The team designed the bots to move in response to vibrations produced by anything from a small acoustic speaker to an attached piezoelectric actuator.

"As the micro-bristle-bots move up and down, the vertical motion is translated into a directional movement by optimizing the design of the legs, which look like bristles," researcher Azadeh Ansari said in a press release. "The legs of the micro-robot are designed with specific angles that allow them to bend and move in one direction in resonant response to the vibration."

The Georgia Tech team sees a slew of potential applications for their vibration-powered microbots.

Environmental researchers could use armies of the tiny robots to monitor an ecosystem, while medical experts might one day deploy them in the human body, perhaps to deliver medications or repair injuries.

Before that can happen, though, Ansari said the team needs to find a way to scale-up production of their bots and make them more robust.

"These micro-bristle-bots walk nicely in a laboratory environment," she explained, "but there is a lot more we will have to do before they can go out into the outside world."

More on microbots: Watch an Adorably Tiny Robot Go for a Teeny Run

Butthole Surfers
Scientists Drive Tiny Robot Around Inside Living Butthole
10. 21. 20
Read More
Magnetically-Controlled Organic Microbots Could Change Medicine in the Next Decade
11. 26. 17
Read More
Meet the Hive of Insect-Like Machines That Can Assemble Virtually Anything
10. 2. 17
Read More
+Social+Newsletter
TopicsAbout UsContact Us
Copyright ©, Camden Media Inc All Rights Reserved. See our User Agreement, Privacy Policy and Data Use Policy. The material on this site may not be reproduced, distributed, transmitted, cached or otherwise used, except with prior written permission of Futurism. Articles may contain affiliate links which enable us to share in the revenue of any purchases made.
Fonts by Typekit and Monotype.