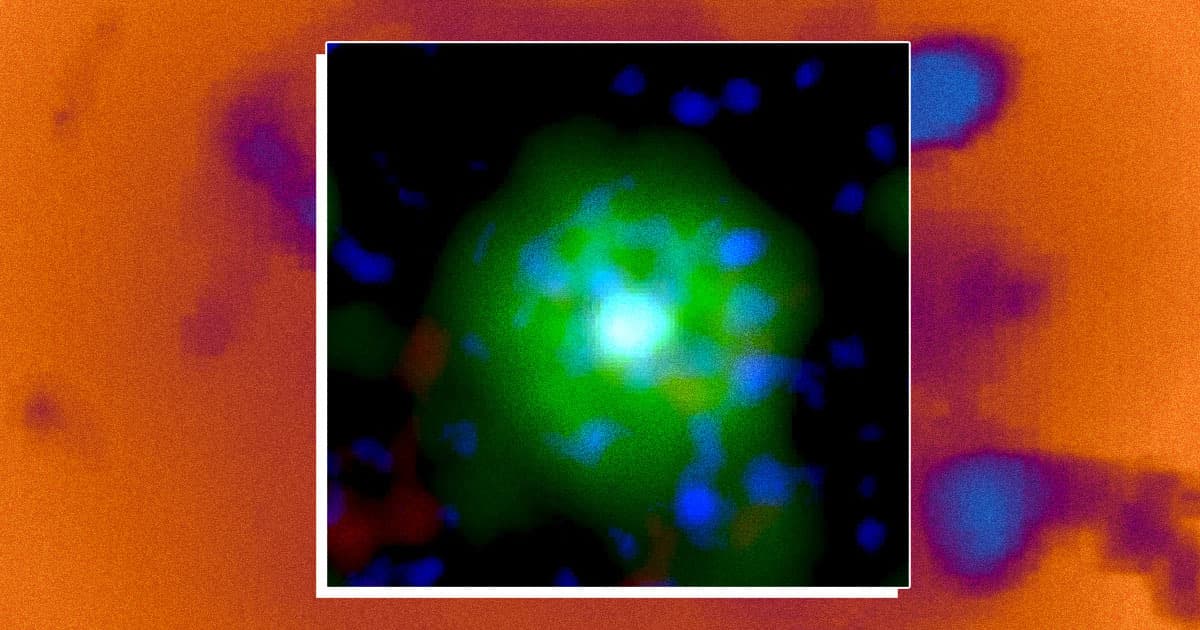 In X-Ray, it glows bright green.

In X-Ray, it glows bright green.

A team of astronomers suspects it found a brand-new type of star, which the European Space Agency (ESA) compares to a set of "cosmic neon lights."

The star, which glows a rich shade of green when viewed through an X-ray telescope, has baffled astronomers since it was first spotted in 2019. But now ESA scientists seem to have gotten to the bottom of things, CNET reports, finding that the new star seems to be the unlikely result of two white dwarfs — the kind of dead star our Sun will eventually become — merging and somehow managing to not destroy each other.

The resulting star is something of an oddball, even aside from its bright green hue. Because it comes from two burnt-out stars, it seems totally devoid of cosmic fuel like hydrogen and helium, according to research published last month in the journal Astronomy & Astrophysics. Meanwhile, the gases on its surface are whipping around at record-breaking speeds.

The ESA shared an X-ray image of the star on Monday, noting that it's the first time astronomers have ever captured an image of a celestial body like it.

Sadly, the bizarre star won't be around for long, at least compared to a typical cosmic time scale.

Because the star is unusually volatile and unstable, so it will likely burn out and collapse into a neutron star within just 10,000 years.

Yeet!
This Star Appears to Have Survived a Supernova
7. 15. 20
Read More
Bright Streaks
Scientists: SpaceX Satellites Threaten "Astronomy Itself”
11. 12. 19
Read More
Three-Body Problem
This Neural Network Quickly Solves a Major Astronomical Problem
11. 7. 19
Read More
+Social+Newsletter
TopicsAbout UsContact Us
Copyright ©, Camden Media Inc All Rights Reserved. See our User Agreement, Privacy Policy and Data Use Policy. The material on this site may not be reproduced, distributed, transmitted, cached or otherwise used, except with prior written permission of Futurism. Fonts by Typekit and Monotype.