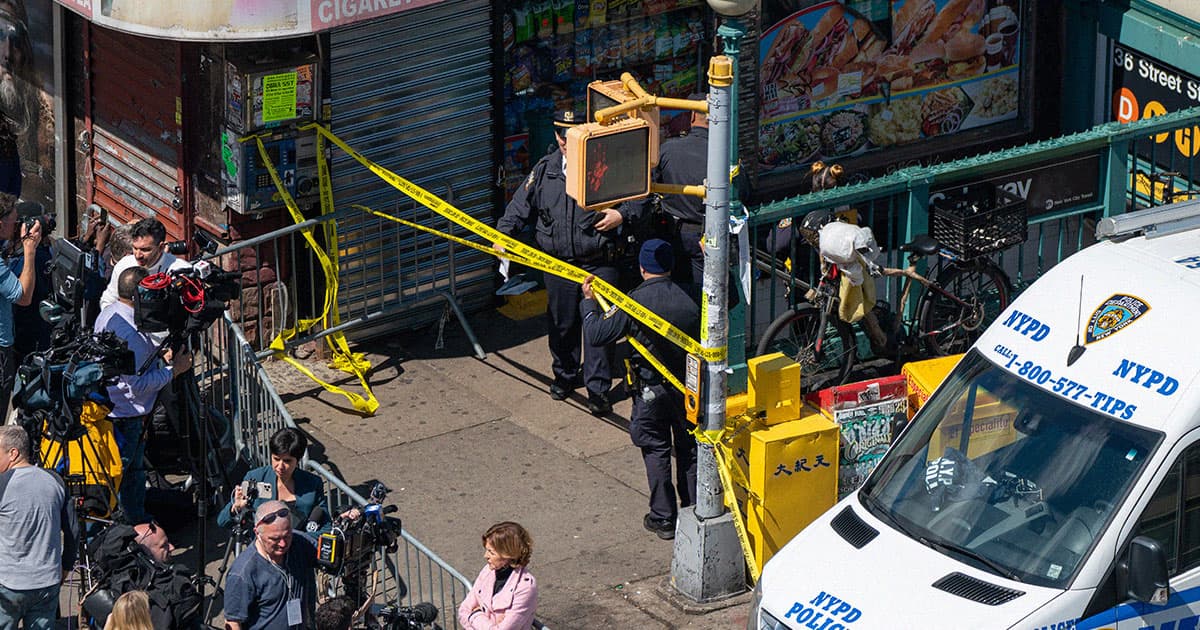 "People are scared, let them get out safely."

"People are scared, let them get out safely."

Fear not, citizens. In a mass shooting event, Uber is there to carry you to safety — for the low cost of surge pricing, of course.

We wish that had come from a dystopian novel, but that's exactly what happened before Uber finally shut off surge pricing after the horrific NYC subway shooting yesterday, in which 10 people were shot and 23 were injured, causing major transit disruption. Because of the traffic increase as people tried to get out of the area, Newsweek reports, Uber was charging nearly 10 times as much near the scene of the crime.

"People are scared, let them get out safely," one user said online, posting a photo of a nearly $70 Uber ride.

"Our hearts go out to the victims of this morning's terrible shooting in Sunset Park," an Uber spokesperson told Newsweek. "Following the incident, Uber disabled surge pricing in the vicinity and capped pricing citywide."

It's not clear precisely how long surge charges were turned on, but we do know it lasted several hours. The shooting happened around 8:30 am ET and that Bloomberg reported the app had decided to disable the feature just before 1 pm ET. And while it's better than nothing that Uber is reversing charges during the period before it did show, that won't mean much to people who were dissuaded from escaping the crisis by the sky-high fees.

Uber's algorithm doesn't predict shootings, of course, although it's absolutely true they could've moved faster to shut off surges or relied more efficiently on the "Global Security Center" they say "monitors and flags issues that may affect our business and the communities in which we operate — 24 hours a day, seven days a week."

Uber alone shouldn't have to bear the weight of emergency transit issues amid violence though, especially not in a city that claims to remember 9/11 so well. Just throwing this out there, but maybe the NYC police department — which former Mayor Mike Bloomberg bragged was the world's seventh largest army and is today's 24th largest global military spender — could take some of those billions and use it for citywide emergency transit planning instead?

Since there were around 3,500 officers on duty in the area yesterday, according to one lawyer, and it still took them nearly 24 hours to catch the guy, surely budget isn't the problem?

Out of the Penalty Box
The Disgraced Uber Guy Is Back With a Fun New Plan to Kill Restaurants
Sep 11
Read More
Bad Spot
Boston Dynamics Mad Someone Used Their Terrifying RoboDog as Intended
2. 25. 21
Read More
Old Timers
Senior Citizens Are Using an App to Order "On-Demand Grandkids"
2. 24. 19
Read More
+Social+Newsletter
TopicsAbout UsContact Us
Copyright ©, Camden Media Inc All Rights Reserved. See our User Agreement, Privacy Policy and Data Use Policy. The material on this site may not be reproduced, distributed, transmitted, cached or otherwise used, except with prior written permission of Futurism. Articles may contain affiliate links which enable us to share in the revenue of any purchases made.
Fonts by Typekit and Monotype.