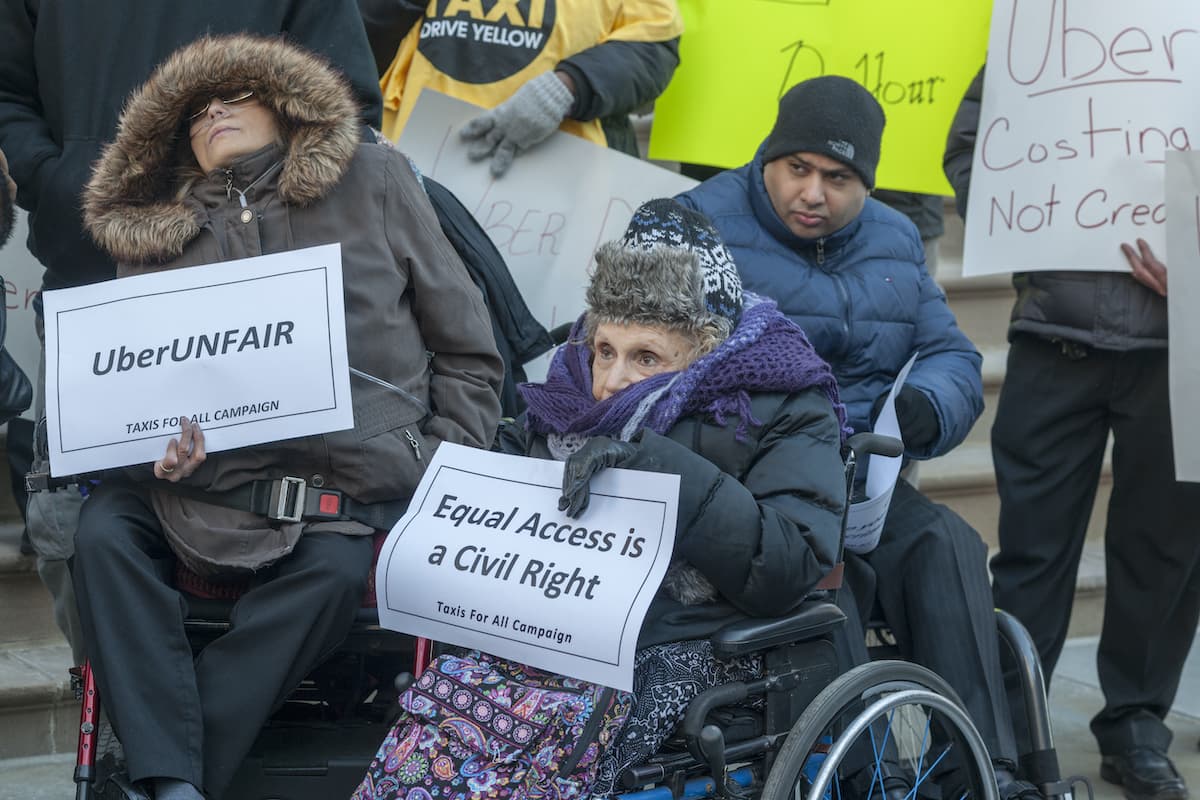 Oops! They did it again.

Oops! They did it again.

Ridehailing service Uber is once again under fire for discrimination — and this time the government has brought out the big guns.

In a lawsuit filed by the Department of Justice, the Biden administration claims that Uber has violated the Americans with Disabilities Act (ADA) by charging disabled riders a "wait-time" fee if it takes them more than two minutes to get into the car that's picking them up.

The way "wait-time" fees are supposed to work is that riders are given two minutes from the time their driver arrives to get into the vehicle, and then charged an additional fee if it takes them longer than that.

While that policy may make sense for people who don't experience mobility issues, the government is, in essence, alleging that Uber punishes disabled riders who need additional time to get into a car as a form of accommodation. A prime example, and one that the DOJ cited in its lawsuit, are rideshare users who use wheelchairs, which can take a little extra time to pack into the vehicle.

The thrust of the lawsuit lies in the stories of two disabled Uber riders who were charged wait-time fees and not refunded when they appealed the fees. According to the suit, one of the plaintiffs — an unnamed woman in Kentucky who is quadriplegic and took an Uber to get to a nearby medical facility — was made to feel like "a second-class citizen" when she was charged the wait-time fee and later told that she would not be refunded.

In a statement to Bloomberg News, an Uber spokesperson said the company's wait-time fee policy is meant "to compensate drivers after two minutes of waiting, but were never intended for riders who are ready at their designated pickup location but need more time to get into the car."

There will, invariably, be those who point out that Uber's wait-time fee, which clocks in at $0.55 per minute, isn't high enough to warrant a federal lawsuit. But this story and the government's relatively-rare pursuance of justice for these disabled plaintiffs isn't just about the money — it's about the broader context of a company charging people extra for needing additional accommodation, which is expressly forbidden in the ADA.

And, let's be real: it's not like Uber has a great track record when it comes to discrimination anyway.

Out of the Penalty Box
The Disgraced Uber Guy Is Back With a Fun New Plan to Kill Restaurants
9. 11. 22
Read More
Legal Woes
Facebook Charged for Role in Illegal Housing Discrimination
3. 28. 19
Read More
Old Timers
Senior Citizens Are Using an App to Order "On-Demand Grandkids"
2. 24. 19
Read More
+Social+Newsletter
TopicsAbout UsContact Us
Copyright ©, Camden Media Inc All Rights Reserved. See our User Agreement, Privacy Policy and Data Use Policy. The material on this site may not be reproduced, distributed, transmitted, cached or otherwise used, except with prior written permission of Futurism. Articles may contain affiliate links which enable us to share in the revenue of any purchases made.
Fonts by Typekit and Monotype.