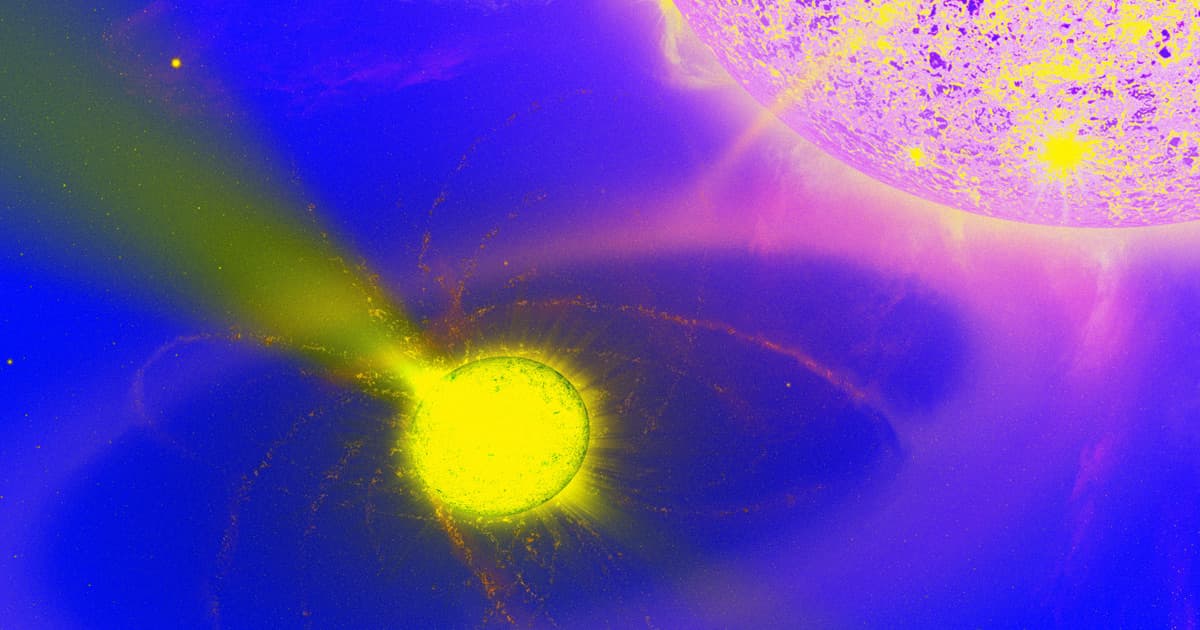 These Two Stars Will Collide in a Spectacular Explosion

Two stars that make up the binary system called V Sagittae, are going to collide in an enormous explosion that'll briefly become the brightest stellar object in Earth's sky, according to astronomers. And it could happen by the year 2083, give or take 16 years.

"The fate of V Sagittae is inevitable," said researcher Bradley Schaefer at Louisiana State University during the American Astronomical Society in Hawaii this week, as quoted by New Scientist. "Set your calendar."

The two stars circle each other closely, with the light they're emitting brightening by a factor of 10 since it was first discovered in 1890, according to a statement.

V Sagittae is made up of an ordinary star orbiting around a white dwarf star, with the former's matter slowly falling onto the latter. The astronomers' mathematical model predicts this process to result in a merger between 2067 and 2099.

The collision will be spectacular.

"For maybe a few weeks, it will be the brightest stellar object in the sky,” Juhan Frank, a Louisiana State professor who worked on the research, told Gizmodo. "It may even shine brighter than Venus, though those predictions are uncertain."

According to Schaefer, it'll be "substantially brighter than the all-time brightest known nova just over a century ago, and the last time any 'guest star' appeared brighter was Kepler's Supernova in the year 1604."

READ MORE: If You Make It to 2083, You Could Witness Two Stars Collide [Gizmodo]

More on exploding stars: Check Out the 3D Wreckage From This Exploded Star

Yeet!
This Star Appears to Have Survived a Supernova
7. 15. 20
Read More
Red Giant Mystery
Did This Planet Survive Getting Swallowed By Its Sun?
11. 4. 19
Read More
So Metal
Two Dead Stars Are Orbiting Each Other's Corpses Incredibly Fast
7. 25. 19
Read More
+Social+Newsletter
TopicsAbout UsContact Us
Copyright ©, Camden Media Inc All Rights Reserved. See our User Agreement, Privacy Policy and Data Use Policy. The material on this site may not be reproduced, distributed, transmitted, cached or otherwise used, except with prior written permission of Futurism. Fonts by Typekit and Monotype.